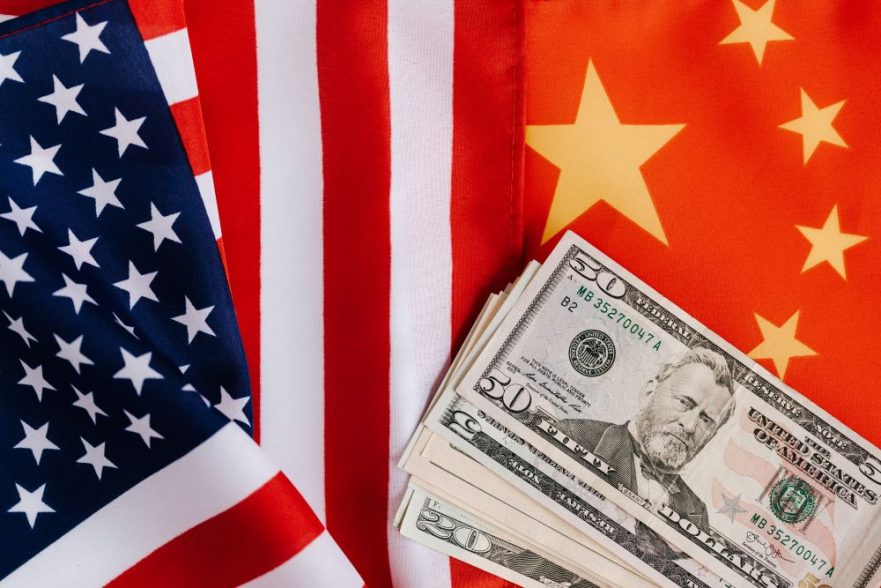 China’s rapid transition to a sophisticated high technology, innovative economy has disrupted the triumphalist Western narrative that dominated in the aftermath of the fall of the Soviet Union, creating a new geopolitical challenger to U.S. hegemony at a time of American moral decline and crisis. China’s nuclear capabilities, military strength and its success in creating an alternative non-Western, state-led model of development further threaten the American empire. For these reasons, China has been viewed by American political scientists and politicians to be ideologically incompatible, and as a result the U.S. has been waging a campaign on social, cultural, economic and political fronts to undermine China. This has included trade sanctions, the forced transfer of Chinese companies, military escalation, surveillance and detention of Chinese citizens, state-sanctioned sinophobia, and accusations of genocide. In parallel, mainstream American media have provided incendiary fodder to manufacture consent for war.

Last Fall, Just World Educational launched the second phase of the World After Covid Project: “The U.S-China Balance.” This dialogue series brought together economic, diplomatic and military experts to discuss the rapidly shifting balance between the United States and China. Materials from the earlier phase of the “World After Covid” project can be viewed here. All the video, audio, text, and related materials from the US-China programming that we produced in the second half of 2020 can be accessed here.

Biden’s doctrine is continuing a dangerous legacy of aggression towards China that demonstrates that extending dialogue is becoming all the more necessary as relations between Beijing and Washington continue to escalate. On the economic front, the U.S.-China “Trade War” has seen both countries impose tariffs on hundreds of billions of dollars of goods, largely fueled by U.S. allegations of unfair trade practices conducted by China. These measures have been accompanied by a digital containment strategy originally initiated by the Trump administration. This campaign to impede, confine, and derail China’s growing tech industry culminated last year in the forced sale of the viral TikTok app to American buyers under the guise of privacy concerns.

On October 17, Just World Educational released the first session of the groundbreaking “US-China public dialogue” in collaboration with the Chongyang Institute for Financial Studies at Renmin University in Beijing. The second dialogue session, released on October 31, featured a discussion hosted by Just World Ed President Helena Cobban with Dr. Yukon Huang, a senior fellow from the Carnegie Endowment for International Peace, and He Weiwen, a senior fellow with the Chongyang Institute. In this discussion, which spanned topics of economics, technology, and U.S.-China relations, Dr. Huang clarified that the U.S.-China Trade War is a misnomer, emphasizing that these measures are part of American efforts to “decouple.” Further, “the concern is about foreign investment and a concern that China has a lot of restrictive practices, which actually makes foreigners, when they operate in China, they don’t have what I call a level playing field. And I think that is a valid concern.”

Ambassador Katherine Tai, reiterated this sentiment in a recent interview following last month’s announcement that tariffs placed against China by the Trump administration would remain in place. In her discussion with NPR, Ambassador Tai emphasized that the driving force behind tariffs was the need to:

“Raise with China our continuing and intensifying concerns about the impacts of China’s very muscular industrial policies on economies like ours. The actions that were taken pursuant to an investigation and findings that these intellectual property and forced tech transfer practices of China had harmed the American economy.”

While the Biden administration maintains that the decoupling of U.S.-China trade relationship is in defense of the interests of America’s workers, businesses, and farmers, Dr. Huang argues that “[decoupling is] affecting scholarly exchanges, information or research, even simple things like visas and tourism. I think the ultimate consequence is the reduction in transfer of knowledge across borders.”

This analysis was shared by Ambassador He Yafei, a high-ranking former Chinese diplomat, who participated in the first session of the “China-U.S. public dialogue” series alongside Just World Ed President Helena Cobban and Dr. Michael Swaine, Director of the East Asia Program at the Quincy Institute for Responsible Statecraft. In this discussion, Ambassador Yafei argued that the intertwined economies “[have] brought enormous benefits in the last four decades to the two countries and their peoples” and noted that efforts to decouple the two economies “will no doubt hurt both economies deeply.”

Furthermore, Americans across the country are feeling the effects of Biden’s trade policy which has only served to exacerbate supply chain issues that have rippled through all American industries. He Weiwen further argued against this “digital iron curtain,” proposing that both countries should work together to expand their economic ties and support countries whose economies have been critically affected by the Covid-19 pandemic: “China and the United States should lower tariffs for those countries and encourage imports from them… we should seriously join to work for debt relief, including exemptions and debt rescheduling for those low income countries.” The Just World Ed dialogue sessions demonstrate that conversation is crucial to repairing the U.S.-China relationship and that despite poorly conceived attempts to decouple, both economies remain inextricably linked.

The first year of the Biden presidency has demonstrated that escalation to war is bipartisan and promoted by the American press. From calls for regime change, escalation of tensions in the Taiwan Strait, to state-sanctioned sinophobia, it is critical to build an informed public in the face of a war-mongering mainstream media attempting to manufacture consent.

Dr. Lyle Goldstein, professor of strategic studies at the US. Naval War College & Founding Director of the China Maritime Studies Institute cross-posted “No American Lives Should Be Lost to Defend Taiwan” on the Just World Ed Blog in December 2020. This piece has gained new relevance in light of President Biden’s announcement just last week that the US would defend Taiwan if attacked by China, following his threats with “China, Russia and the rest of the world knows we’re the most powerful military in the history of the world.” On the claim of military superiority, Dr. Goldstein disagrees:

“There is the distinct possibility that U.S. forces could suffer a major defeat. The logic is simple and involves primarily geography. Taiwan is just 90 miles from Mainland China, but over 6,000 miles from the American mainland. That vast asymmetry means that the Chinese military can bring far greater firepower into the fight at an early point against U.S. forces at the end of an exceedingly long and tenuous logistics chain.”

Despite this, the U.S. continues to support Taiwanese independence. Though there are no established formal diplomatic ties, the US does sell arms to Taiwan under the Taiwan Relations Act.

In the fourth session of the series, which featured JWE President Helena Cobban in conversation with Dr. Lyle Goldstein, Dr. Goldstein broke down the “Cooperation Spiral” of which the four principles are essential gradualism, reciprocity, fairness and enforceability. While initially developed to guide U.S.-China military policy, it’s clear that this intuitive concept applies to all dimensions of the U.S.-China relationship. By using this framework Dr. Goldstein pushes back on the idea that the U.S. must “confront” all dimensions of Chinese power, a naive gameplan which wholeheartedly dismisses China’s status as a superpower. This perceived invincibility or blind bravado has engendered an approach of trigger-happy military aggression spurred by anticipated encroachment. However, as Dr. Goldstein highlights, “China doesn’t… have a base in Cuba, or a base in Venezuela, or a base in Mexico or Canada,” whereas the U.S. has military bases in proximity to Chinese borders in Japan and Korea.” Further cataloguing American intrusions, Dr. Goldstein referred to the recent construction of an American military office of the Institute in Taipei. This $250 million structure, which looks remarkably like an embassy, is an outrageously expensive snub of the One China Principle.

In the same session of the U.S.-China Balance series, JWE President Helena Cobban discussed the Thucydides Trap, which is a popularized framework offering an analysis of American doctrine towards China. The Thucydides Trap postulates that as an ascending power threatens to displace a declining empire, a cascade of violent reactions is initiated in response to standard crises that could otherwise be contained in a deliberate attempt catalyzed by the declining empire to cling to its former glory and maintain an illusion of power. Through this framework, the U.S.’ path towards war may be understood as a strategy motivated by a desire for power and global status and unhindered by the odds of little material gain and probable, devastating loss of life.

Any military conflict engaged with China is likely to be a troubled, ruinous endeavor. Dr. Goldstein illuminates the fallacy of Taiwan as the “cork in the bottle,” further demonstrating the futility of war with China and the dire need for continuing dialogue designed to build understanding rather than escalate aggression between the U.S. and China:

“An American re-intervention in China’s unfinished civil war not only risks military defeat and violates prior historical commitments made under multiple U.S. presidents, but it would also constitute a disaster for U.S. strategy… Contrary to the view of many American strategists, Taiwan is neither the “cork in the bottle” of Beijing’s maritime aspirations, nor the vital lynchpin that holds together U.S. alliances in the Asia-Pacific…The “cork in the bottle” – once described as an “unsinkable aircraft carrier” off the Chinese coast is simply no longer feasible or wise. In actuality, this cork is set to explode with disastrous consequences for the region and for U.S. security if American forces are deployed.”

“The manipulation of public opinion undermining our democracy as we succumb to the exaggerations of the wrongs of others that give an added bite to hostile propaganda, and are leading the world to the very edge of a forbidding geopolitical precipice, and in the process, heightening the prospects of a new cold war – or worse.”

This “firehose of falsehoods” is fundamental to rationalizing war and should feel all too familiar in the wake of the myths constructed by the U.S. military-industrial complex and proliferated by American media to justify the 2001 and 2003 invasions of Afghanistan and Iraq. Our experts’ grim warning must be heeded if we are to move away from this path to war. Please do go and explore our resources on the U.S.-China Balance and support Just World Ed’s work to build the informed public that’s needed if we want to build a more just and sustainable world.