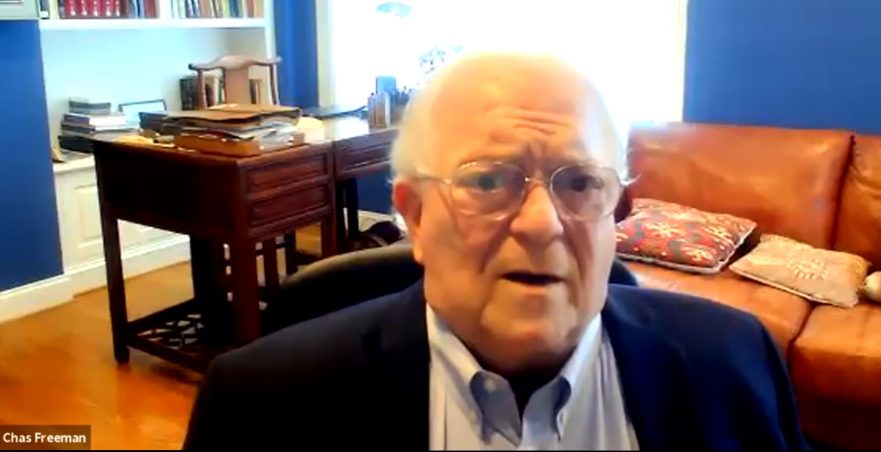 Back in early July, I was lucky to have Amb. Chas W. Freeman, Jr. as my guest on Just World Ed’s “World After Covid” webinar series. Near the beginning of his extremely illustrious career as a U.S. diplomat, in 1972 Freeman served as Pres. Nixon’s interpreter during Nixon’s breakthrough meeting with Chairman Mao Zedong in Beijing, and he has followed Chinese affairs closely ever since. (If you go to this link on our website, you can watch the video of all the July conversation with Freeman. Plus, you can read or download the transcript, and find links to lots of related materials.)

As the question of relations with China becomes an increasingly large part of the policy discussions swirling around the U.S. elections, it’s worth going back to review some of what Freeman and I discussed in July, which remains very timely.

At one point, in the conversation, I noted that roughly a decade ago Freeman had already concluded that there was a significant shift in the balance of prestige worldwide– and therefore also of considerable elements of power– from the United States to China, and that this year’s Covid-19 pandemic seems to have accelerated that shift.

What, I asked him, are the implications for this shift at the global level?

Well, the United States became the greatest power on the planet sometime in the 1870s, economically. And World War I cemented our position, which we then stepped back from during the period of isolation. World War II took us out of our shell and made us the hegemonic leader of a block of nations against another block, led by the Soviet Union.

In a way, the Cold War…. began with squabbles over the spoils of the very bloody global catastrophe called World War II. We’re now engaged in a very, very different sort of struggle. There are no blocs. China, as a matter of principle, doesn’t like allies, because it thinks they create liabilities.

… [T]here are lots of risks in alliances… And anyway, the Chinese don’t do that. So whatever sort of world we’re getting into, it isn’t going to be one in which China replicates the American approach to global leadership.

If it ever becomes a global leader, the Chinese are not the Soviet Union, they don’t have a messianic ideology. They’re not engaged in regime change operations, which we are in many places. They haven’t yet managed to define their own frontiers. And in the case of Taiwan, we are engaged in disputing the boundaries of a nuclear power directly on the basis of– what principles of international law? I do not know.

And so whatever is going to happen, it’s not going to be a replication of either the Cold War or the world that immediately followed it. I would expect that since the United States is dismantling organizations or withdrawing from them, whether it’s the WTO or now the World Health Organization in the middle of a pandemic– hard to understand!– that what we’re going to see is a series of workarounds.

Others will create institutions like the arrangement for trade dispute resolution I referred to which are parallel to, related to, but not part of the previous institutions and which really exclude the United States. We will not have a voice. We will not be at the table. And of course, if you’re not at the table, you’re on the menu. So we can expect our influence to continue to decline.

We have huge power. We are, I’m afraid, in some danger of losing a major element of it through the abuse of sovereignty over the U.S. dollar; if you impose unilateral sanctions– nobody abroad likes thieves, whether they are a U.S. ally or a friend or a partner or an enemy. And there is a real possibility that the advent of digital currencies, especially from China, and the arrival of alternatives to the SWIFT institution in Belgium, which manages dollar trade settlement communications, that, you know, the dollar will lose its value internationally. That will have a profound effect, if it happens. It will have a very profound effect on us.

I should finish this by saying that one of the more extraordinary things is that it’s been decades since the United States has been able to finance its own government operations without borrowing. You know, we’re living on credit rollovers, and we’re testing the proposition that debt can become infinite with no consequences. I don’t believe that. So I think we’re taking a lot of risks that we don’t need to. And others may not like us more and more, they don’t. We have the power, at the moment, to coerce, in many respects. But I see the danger as being that we lose that capacity…

Well, there were a lot of other great points that Freeman made in our discussion. And in that webinar series as a whole, we heard deep thinking from a range of other experts on the dynamics of world power. People like Richard Falk, Medea Benjamin, Vijay Prashad, Bill Fletcher, Jr, and others. I am very pleased that at a time of rapid global change, Just World educational has been able to bring these experts’ voices to the public. Head on over to our “World After Covid” resource page and check them all out…