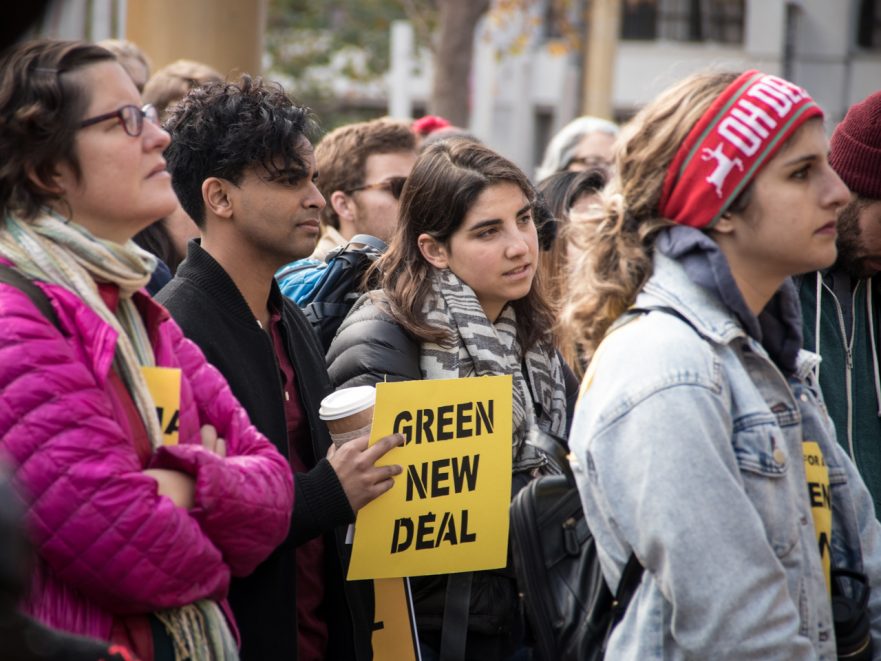 The Green New Deal, one of the hottest topics in Washington, D.C., offers critics of militarism a once-in-a-lifetime opportunity to take a bite out of the United States’ war machine.

The reasons why are simple, and will come as no surprise to those who have participated in JWE’s #WarHurtsEarth campaign. As the planet’s biggest consumer of fossil fuels and emitter of greenhouse gases, responsible for roughly 5% of the worldwide total, the U.S. military must be confronted as part of any meaningful plan to avert a looming ecological catastrophe.

Until now, it has enjoyed blanket exemptions from the already-meager carbon policies adopted by the U.S. But with the political will to tackle the challenge of climate change growing, both at the grassroots and increasingly in Congress, supporters of peaceful foreign policies have an unprecedented chance of ending its unique entitlement to ravage the planet at will.

The Green New Deal’s costs will depend on its final form, but nobody expects a comprehensive overhaul of the entire economy to be cheap. And few see a path to funding such a massive, yet urgent, undertaking without redirecting expenditures from the Pentagon, currently the recipient of over a quarter of the federal government’s overall spending.

While wildly popular as a concept, the Green New Deal remains something of a blank slate as policy. Coined as a term by New York Times columnist Thomas L. Friedman in 2007, versions of it were adopted over the following years by groups as varied as the United Nations Environment Programme, the U.K.’s Green New Deal Group, and the Green Party of the U.S.

The idea only exploded into public debate after the 2018 election, when the Sunrise Movement, a national network of youth climate activists, launched an ambitious campaign demanding the House of Representatives form a Select Committee for a Green New Deal. Championed by Congresswoman-elect Alexandria Ocasio-Cortez, the plan soon ran aground on Capitol Hill, where incumbents of both parties rub shoulders with fossil fuel industry lobbyists.

On Friday, Speaker-designate Nancy Pelosi announced the formation of a Select Committee on the Climate Crisis, but without the broad powers climate activists had demanded. Supporters of the original proposal slammed the move, with Sunrise Movement founder Varshini Prakash calling it “a dereliction of duty from Nancy Pelosi and Democratic leadership.”

Although it disappointed many, the setback may ultimately work for the best. Nothing prevents activists and members of Congress from crafting a proposal, with or without sanction from the House leadership. And a process outside its control will likely offer more opportunities to strengthen the final product, resulting in a plan adequate to face the crisis at hand.

A draft posted online by Ocasio-Cortez says nothing about the military or its immense contribution to climate change. She has responded warmly to constructive criticism of the plan in its current form, tweeting a call to “struggle with [her] and others” by Kali Akuno, director of the Mississippi-based Cooperation Jackson, as “[a]n important critique.” Bigger problems will probably lie among 434 other House members, to say nothing of 100 Senators, many beholden not only to the fossil fuels lobby, but also the weapons industry.

But the historical moment demands whatever struggle is necessary. And JWE’s ongoing work at the intersection of militarism and ecology puts us in a unique position to equip grassroots activists with the information and resources they need.

You can expect to hear more on our plans very soon in the New Year. If you have ideas about what would be the most helpful, please let us know! And along with our running list of resources on militarism and environmental harm, as well as the joint appeal – “To Save the Earth, Curb Militarism!” – we launched with four other organizations last Earth Day, check out this recent content from across the Web on militarism and the Green New Deal:

And as a first step, please consider signing and sharing these two petitions from our #WarHurtsEarth partner organizations, CODEPINK and World Beyond War:

Joe Catron is Director of Outreach at Just World Educational.

Featured image: Hundreds gather in San Francisco with the youth-led Sunrise Movement to call on House Democratic Leader Nancy Pelosi to support the formation of a Select Committee to advance a Green New Deal to address climate change. (Photo by Peg Hunter/CC BY-NC 2.0)