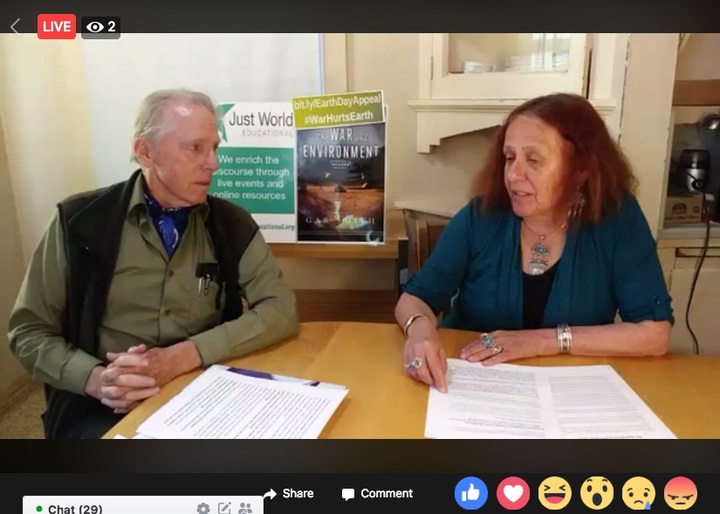 As a prelude to Earth Day, on Thursday, April 19th Just World Educational hosted a Facebook Live discussion on the Earth Day Appeal that we launched last month, titled “To Save the Earth, Curb Militarism!” Please sign and share it with the hashtag #WarHurtsEarth.

The Live discussion featured Jackie Cabasso, Executive Director of Western States Legal Foundation and National Co-convener of United for Peace and Justice, and Gar Smith, the director of Environmentalists Against War, a member of the coordinating council at World Beyond War, and editor of the award-nominated book, The War and Environment Reader (Just World Books, 2017). The discussion was emceed (off camera) by our own Jim Haber (West Coast Representative at Just World Educational).

After reading the six key ‘asks’ of the Earth Day Appeal, Smith and Cabasso elaborated on the rapacious nature of modern warfare. Smith began by reviewing the enormous fossil fuel consumption footprint of the U.S. military. Cabasso then explored the history of nuclear weapons testing, in all cases on indigenous lands, including in the Marshall Islands and the American Southwest. She shared the 1995 testimony before the International Court of Justice of Lijon Eknilang, a woman from Rongelap Atoll in the Marshall Islands, who described the experiences of Marshallese women who have experienced babies born with gruesome birth defects in the aftermath of U.S. atomic testing. Cabasso was actually present in the Hague to hear this testimony in person.

Cabasso recalled that the environmental and human impact of nuclear weapons was never mentioned in her ecology class at the time of the first Earth Day in 1970, when she was a senior in high school. Cabasso laments the “real resistance” to including a militarism and anti-war component in many environmental initiatives, including the massive People’s Climate March in 2014 in New York. Cabasso believes the obstacle at the institutional level among big environmental groups is that anti-militarism challenges the fundamental economic structure of the country. More positively, she notes that at the individual level, there is greater openness to acknowledging the linkages.

Smith drew attention to the perverse profit incentives of weapons manufactures like Boeing, Northrop Grumman, and Raytheon (maker of the Tomahawk missile), which have a vested interest in global warfare. He identified a key task of concerned citizens: working to transform the economy so that profits are aligned with civilian development and peace rather than militarism. Smith calls for transforming the so-called defense industry from an aggressive war industry into a genuine “home-defense” force (e.g. responding to extreme weather events) with a far smaller carbon footprint, and repurposing the bulk of the Pentagon budget to promote environmental restoration and civilian wellbeing.

Cabasso called upon viewers to get involved in the Poor Peoples’ Campaign: A National Call for Moral Revival, initiated by Rev. William Barber. The campaign starts on Mother’s Day, May 13th, 2018, involving public education and nonviolent direct actions. The themes of the third and fourth weeks are the war economy and ecological devastation. Looking ahead, World Beyond War will be hosting a two-day international conference in Toronto, starting on International Peace Day, September 21.

The Earth Day Appeal has been signed by (at the time of writing) over 160 individuals and some 50 organizations from all over the world. Organizational signatories include Code Pink, the Costs of War Project at Brown University, and Greenpeace USA (to pick just a few of the many notable groups). Signatories come from every continent except Antarctica, including the nations of Australia, New Zealand, Mexico, Canada, Tunisia, Cameroon, Chile, Denmark, Netherlands, United Kingdom, Germany, India, and Nepal.