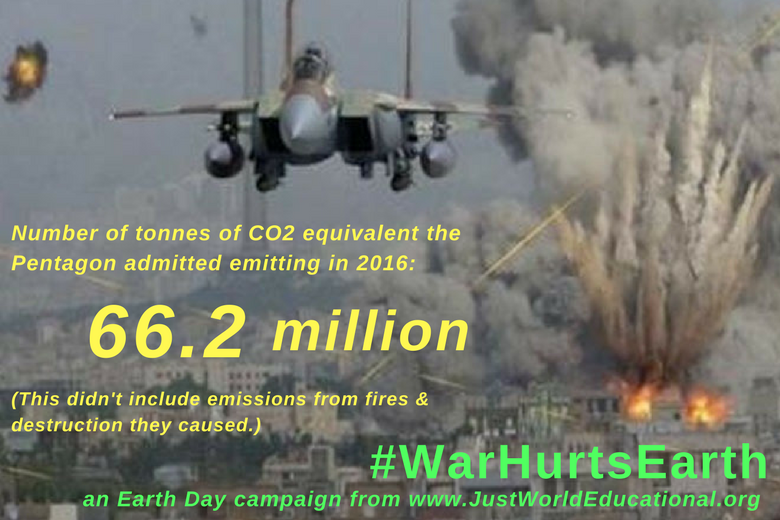 We’ve been refining our thinking for the #WarHurtsEarth campaign that we’re planning for Earth Day 2018 (April 22.) As you can read here, we’re planning for this campaign to have both an “In Real Life” set of activities and a strong, complementary online component. We are also, now planning to add in at least one webinar, perhaps scheduled for the week before Earth Day, when interested people can hear and then join a discussion featuring two or three good experts in this field.

We have now (March 2) completed the drafting of the promised “Public Statement” that we’ll be using as major organizing tool for the campaign, and here it is:

TO SAVE THE EARTH, CURB MILITARISM!

Please help us to circulate this as widely as possible!

We are also planning to a user-friendly resource page on the War/Earth issue, on this website. But since we have some “architectural” issues to face re the design of this resource page, we’ve decided to start sharing some of our gathered resources here, as an interim measure.

There is a lot more to come! But here’s a first helping:

1. Sources on the Pentagon’s “everyday” polluting:

2. Sources on nuclear weapons  and their contaminating effects:

3. Sources on the environmental effects of some recent (and current) wars:

4. Some  short videos on the US military and the environment:

In addition to the “Effects of War on the Environment” video listed above, here is another informative short video: