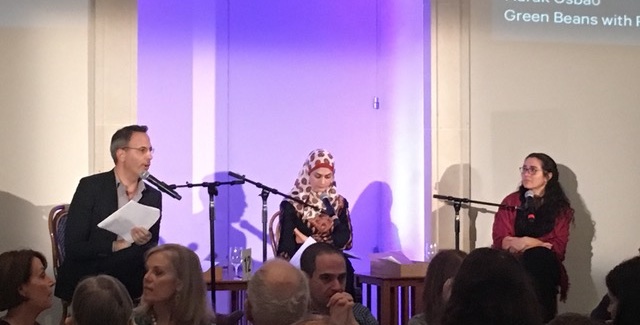 Food-heritage experts Laila El-Haddad and Maggie Schmitt led ten days of very educational (and fun!) activities as they traveled up and down the U.S. east coast taking discussions of many themes from their gorgeous ethnographic cookbook The Gaza Kitchen to a wide range of audiences.

Our earlier report on their activities covered events they did in Maryland, Washington DC, and at Boston University, where they participated in a wonderful seminar led by food guru Nancy Harmon Jenkins (who contributed a Foreword to The Gaza Kitchen.) After B.U., all three of these experts stayed in the Boston area one further evening– for an informal discussion of the book at the lovely Cambridge, MA restaurant of Jame Beard Award-winning chef Susan Regis, Shepard.

Regis also served attendees a range of dishes from the book, including the delicious cauliflower fritters: 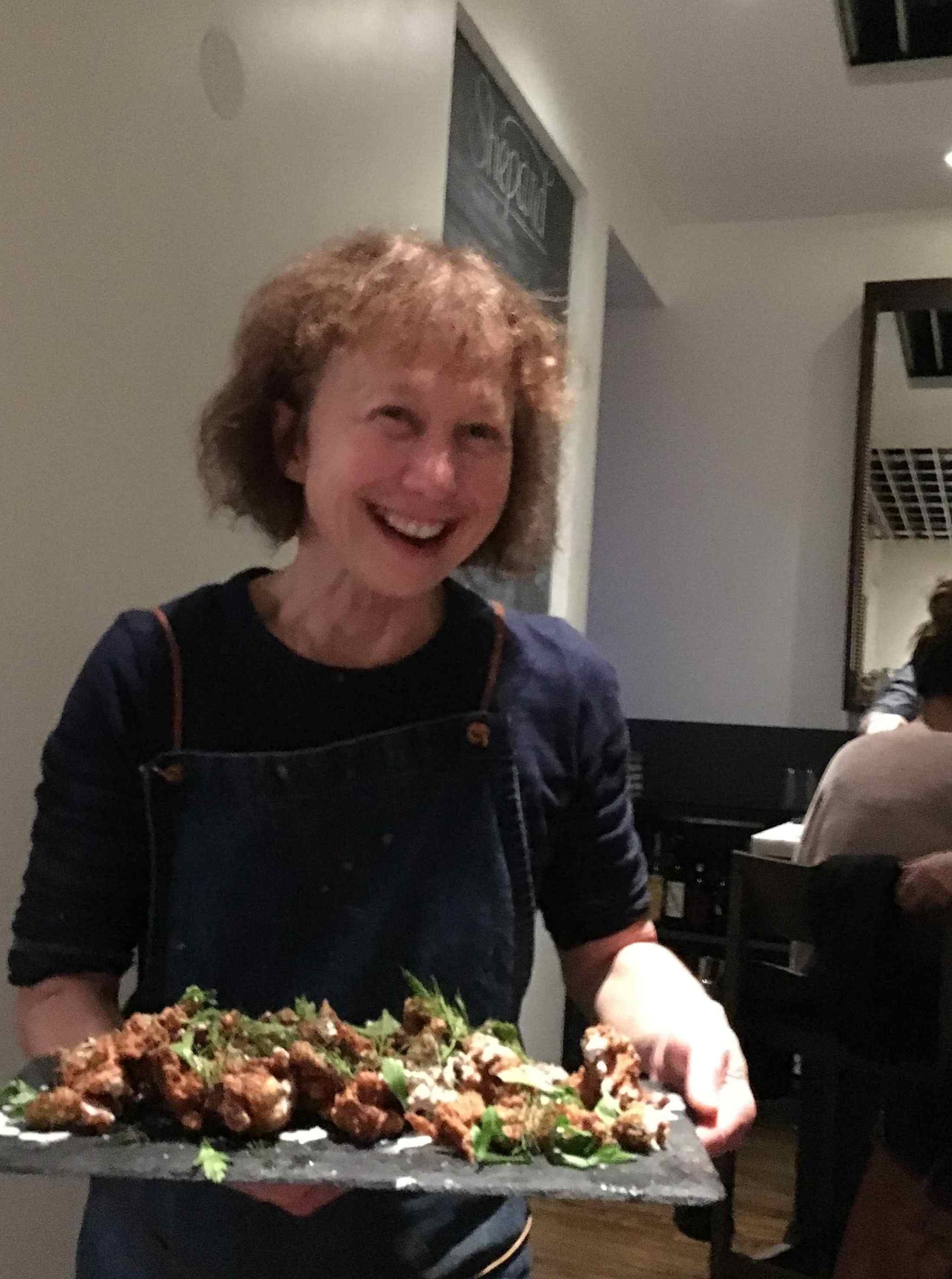 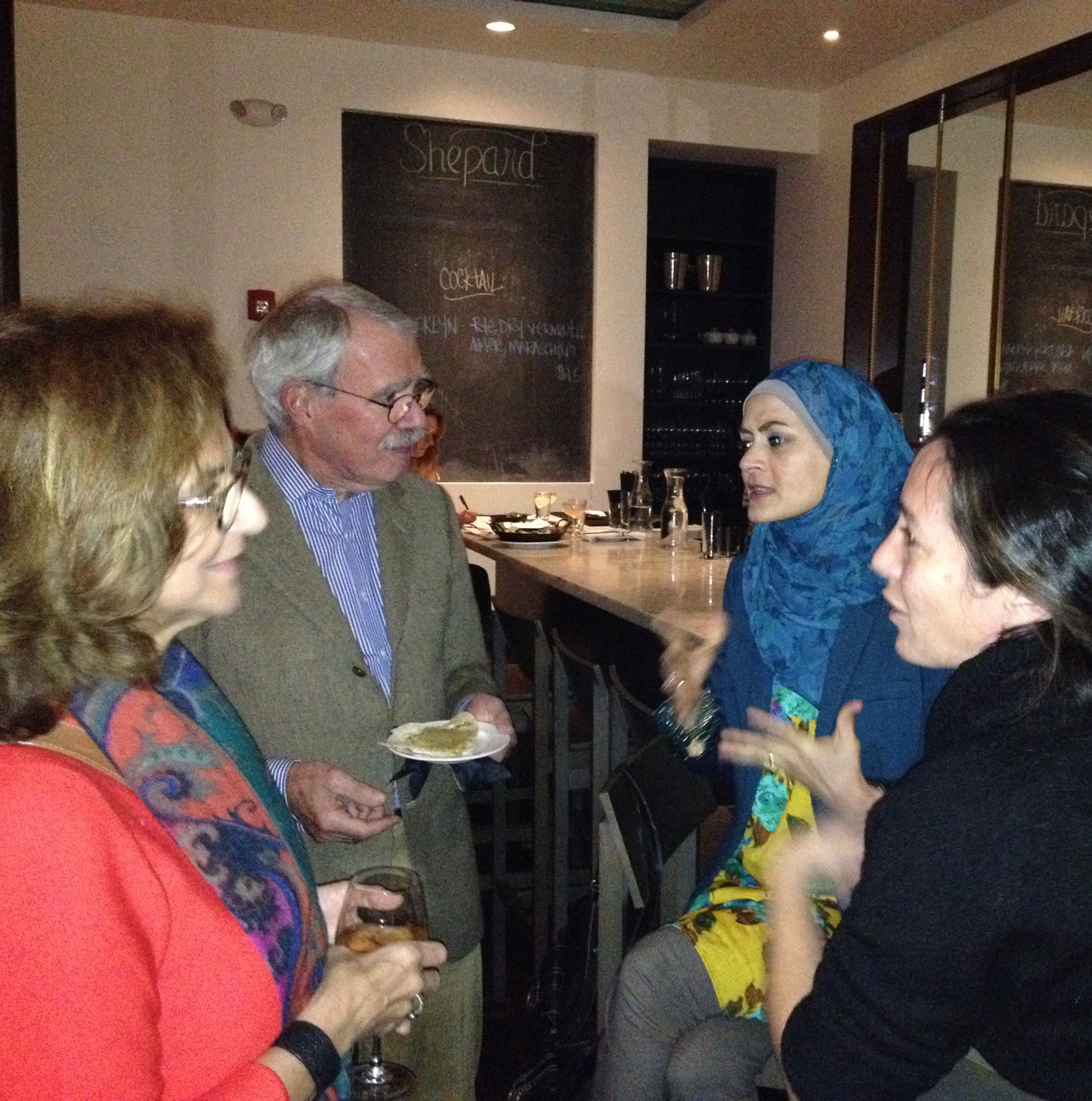 Laila and Maggie (right) chat with culinary afficianados at Shepard. 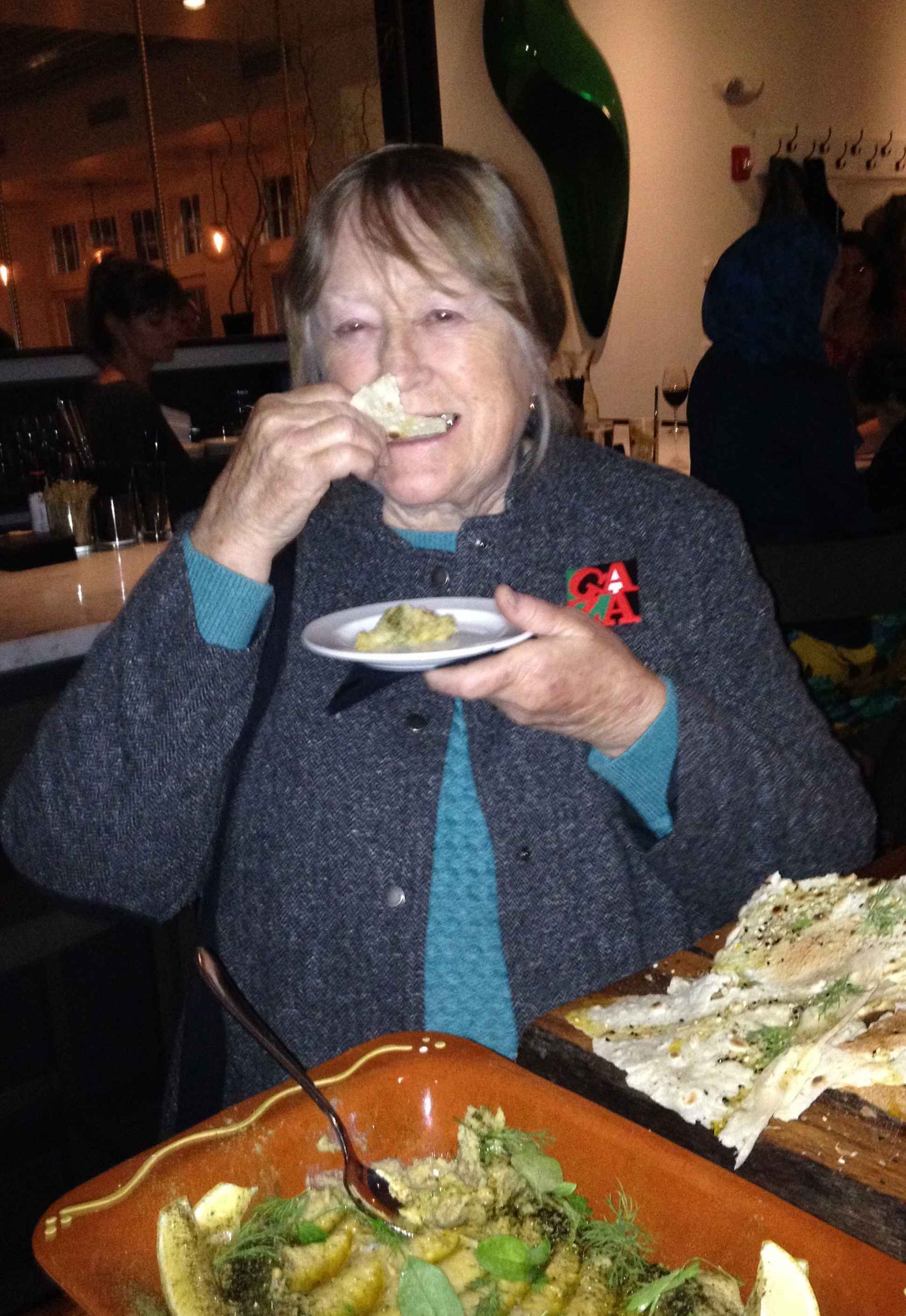 From Boston, Laila and Maggie traveled to New York City where they were featured along with British-Israeli chef Yotam Ottolenghi at two amazing “Feast of Jerusalem” ticketed dinners organized by the Metropolitan Museum of Art in association with the Met’s stunning “Jerusalem 1000-1400” exhibition. The lead picture at the top of this blog post shows the three of them in full swing!

As we’d reported earlier, the tickets to those dinners sold out before the end of August— which left us unable to do much to help promote or publicize them. But then, with great vision, the Met’s people organized a third, scaled-down version of the dinner. This consisted of a thrilling, curator-led tour of the Jerusalem exhibit followed by a reception featuring a selection from the “Feast of Jerusalem” menu, during which Maggie and Laila informed and delighted attendees with their commentary on the history of the foods we were all eating. 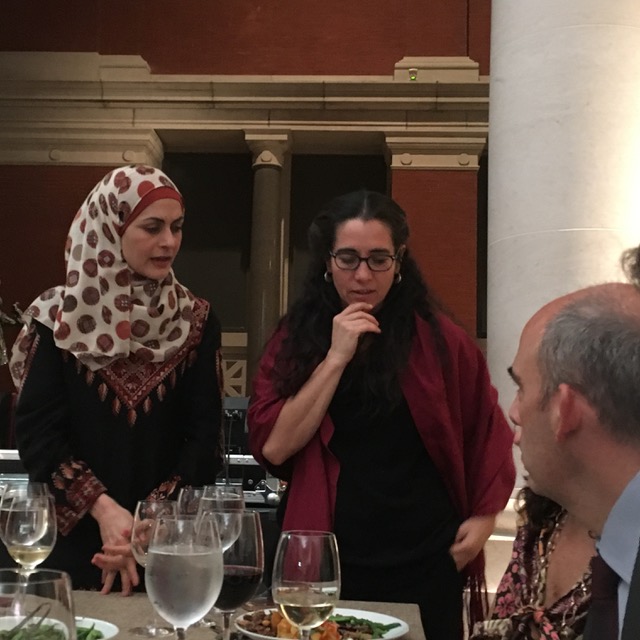 Laila and Maggie engaging with diners at the “Feast of Jerusalem” 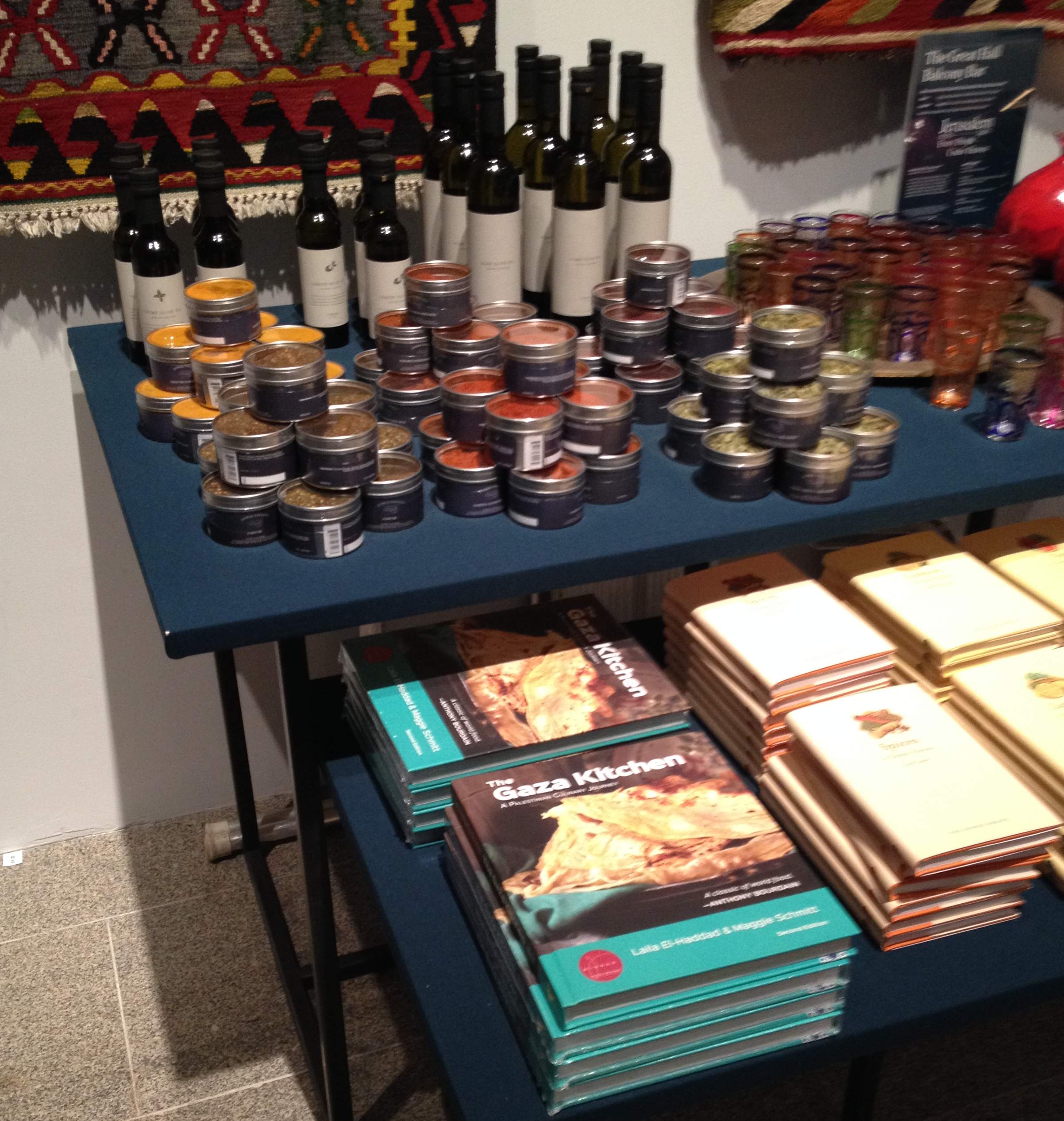 The Gaza Kitchen— as displayed in the Met’s bookstore! 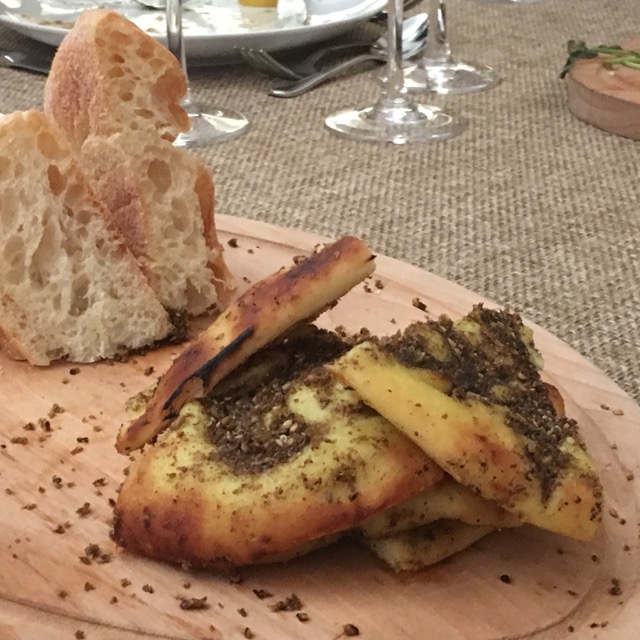 Zaatar bread as offered at the Met’s feast. 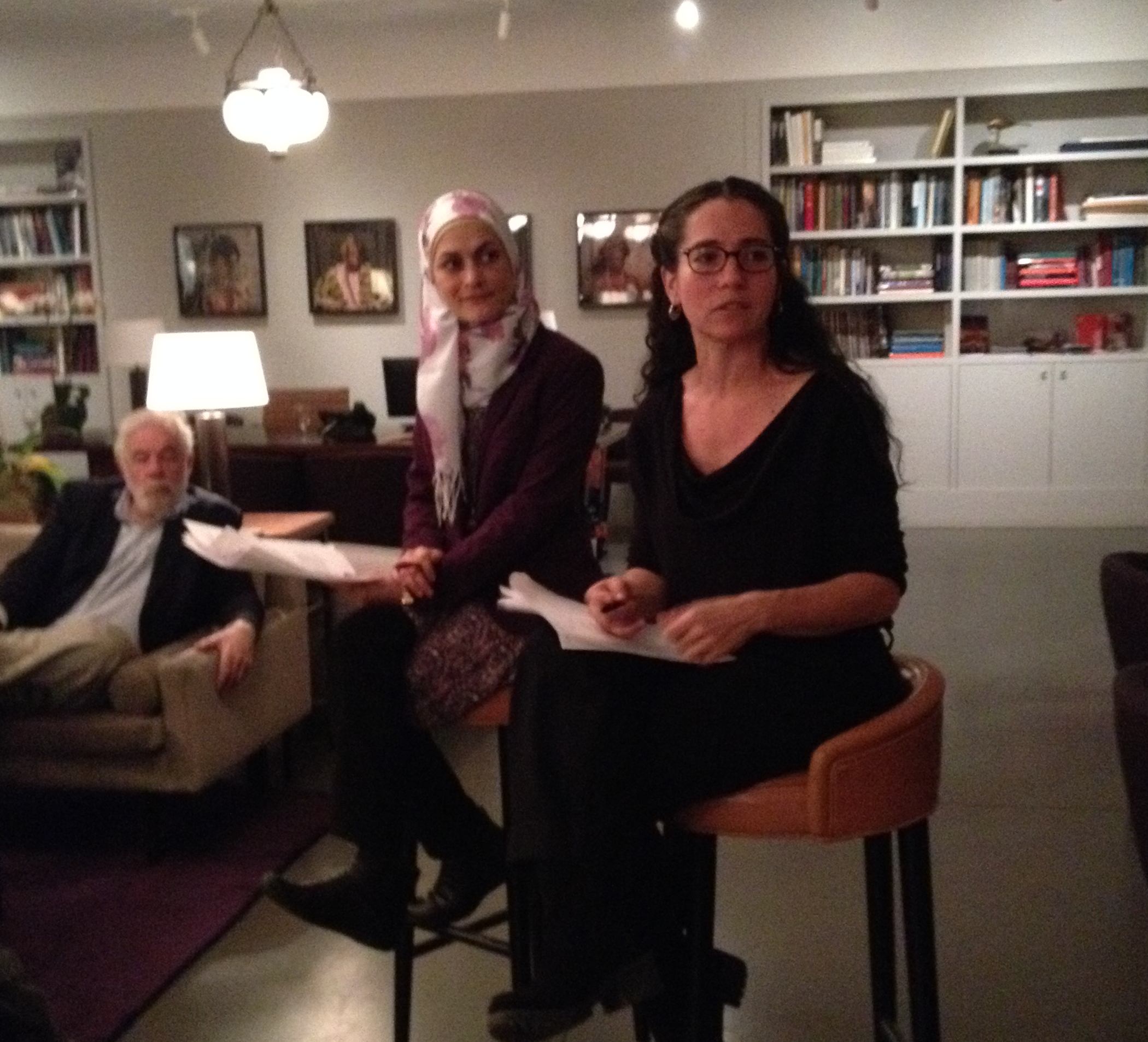 Laila and Maggie discussing the Jerusalem area’s food heritage at the more informal, third event at the Met.

What an information-packed and fun evening that was! Drawing on the research that they and Ottolenghi had conducted into the foodways of medieval Jerusalem, Maggie and Laila gave wonderful explanations of the wide availability (for those who could afford it) of many different spices and ingredients, and the mastery by that era’s chefs of many advanced flavoring techniques.

The spicing of various dishes, they explained, was not developed– as many of us had thought– mainly as a way of disguising putrescence… but rather, as a way of exhibiting and sharing the wealth of the host (given the high cost of many of these spices, which had been brought to Jerusalem along extensive, Muslim-organized trade routes from the East Indies or East Africa.)

We learned that the haute cuisine of the Abbasid Muslims, which was widespread among upper classes in Jerusalem prior to the Crusades, was rapidly appreciated and adopted by the Frankish/Crusader invaders… And then, how the discovery/development of refined sugar and refined flour led to a huge blossoming of the preparation of intricate new desserts in the Jerusalem kitchen.

The third Met event was a great capstone to Laila and Maggie’s series of Palestine-related, culinary heritage events. JWE is grateful to the Washington, DC-based Foundation for Middle East Peace for contributing to some of their costs.