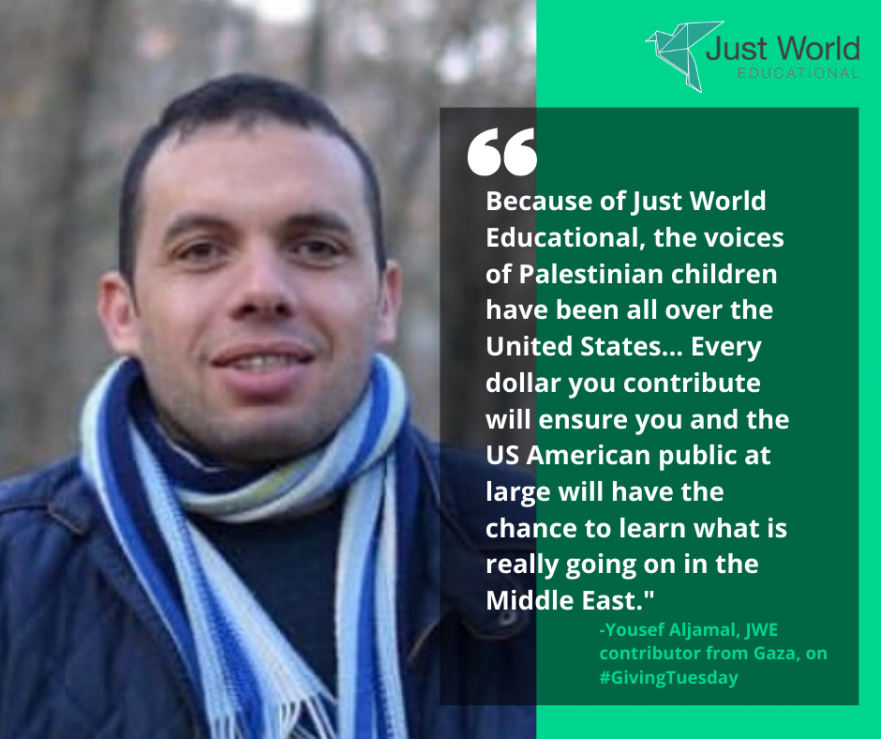 December 3rd is #GivingTuesday, and I hope you’ll consider making a donation to Just World Educational because of the important work they do. This includes covering the drastically deteriorating situation in Gaza, as well as other crises in the Middle East, such as Yemen and Algeria.

This year, Just World Educational has produced remarkable projects that aim to raise awareness about several Middle East-related issues. This includes the man-made humanitarian disaster in Yemen, protests in Algeria, the Great March of Return in Gaza, and unconditional US support for Israel and its crimes.

Just World Educational has generously given us much-needed information about current issues in the Middle East, which has contributed to having a more informed public, which is essential because of the important role the US has played in the region over the years.

It is time to give back to JWE, and one way to do so is to make a donation this #GivingTuesday!

You can give securely online using your credit card or Paypal account by clicking here:

Through the platform Just World Educational offered me, I was able to contribute a number of articles that highlight different issues in Palestine, such as growing up as a refugee in Gaza, the challenges that refugees face, Eid in Gaza, and stories of Palestinian artists and students, who thrive despite all the odds. These stories were the means to make people connect with and relate to Palestinians on the ground who have been living under Israeli military occupation for decades.

Not only this, I just returned back from a month-long speaking tour in the United States, which was co-sponsored by Just World Educational. During the speaking tour, I was able to highlight the plight of Palestinian children in Israeli jails as well as the humanitarian situation in the Gaza Strip, where I grew up.

I spoke at dozens of places in eight different US cities, and met with five members of Congress and 16 congressional offices in an attempt to gain support for the HR 2407 bill, which aims to make sure that US aid is not used to torture or detain children, including Palestinian children. JWE published the US version of the book Dreaming of Freedom: Palestinian Child Prisoners Speak, which I translated.

Because of Just World Educational, the voices of Palestinian children have been all over the United States. The book has 29 stories of child prisoners, of which the story of Ayman Alabasi, 16, from Jerusalem, is particularly tragic. Upon his release from Israeli jails, he was shot dead. The Israeli army tried to kidnap his body, but people were able to rush his body to the graveyard before the Israeli army could do so, but this meant his family was not able to see him. He was interviewed for the book, but he didn’t live long enough to see it published. This underscores how important it is to continue the critical and timely work for JWE.

Every dollar you contribute will mean and actual contribution to a project that will be done in the future by JWE. This will ensure you and the US American public at large will have the chance to learn what is really going on in the Middle East.

And because learning is a comma, not a full-stop, JWE has to continue its vital work and it counts of you for this to happen. JWE is a project from the people for the people, and we hope you play your part during #GivingTuesday so that we all bring about change to US policy in the Middle East.

Your contribution means you will continue to hear back from JWE and that JWE will be able to continue its important work of reporting and lifting up the voices of people on the ground in the Middle East and beyond!

Warm wishes to you from ~

A Palestinian refugee from Gaza and JWE contributor