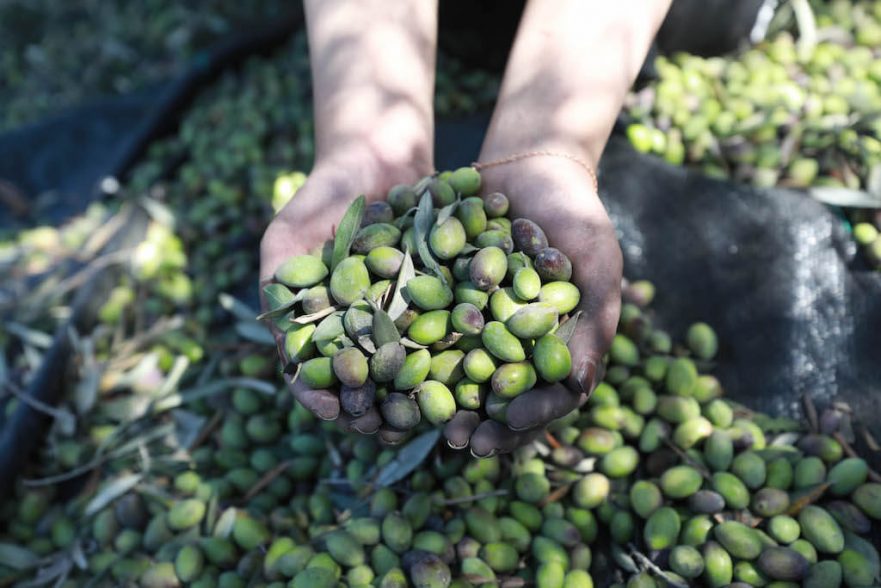 These soldiers, these modern soldiers

Besiege her with bulldozers and uproot her from her lineage

They vanquished our grandmother who foundered,

Her branches on the ground, her roots in the sky.

She did not weep or cry out. But one of her grandsons

Who witnessed the execution threw a stone

At a soldier, and he was martyred with her.

Olive harvest in Palestine sees the gathering of families where all members for days participate in picking the olives. The olive harvest in Palestine starts after it rains for the first time in autumn – an indication that olives are ripe and ready to be picked. This usually happens every year in early October and lasts for a couple of weeks. In the Gaza Strip, some people use the expression “The cross has materialized,” to declare the start of the olive harvest season. The expression has its roots in the city’s oral history which saw conversions to Christianity following the worship of stars and fire in the past.

According to legend, a priest came to Gaza asking people to convert to Christianity after all Palestinian cities had converted except for Gaza. He told the locals that they would be saved from drought and that it would rain if they did so. The people of Gaza, being rebellious throughout history, refused to convert unless the priest prayed to God and caused it rained. According to the story, the priest prayed, and it rained, and as a result, the people converted and used the expression “the cross had materialized” to express the fact that the priest’s promise had come true.

During the olive harvest in Palestine, families come together to eat meals prepared quickly such as tomatoes and potatoes baked over a fire as everyone is busy collecting and pressing olives. While men and women engage in picking olives, children gather to help as well – taking part in the harvest gives them a sense of identity and responsibility. As the olives are being picked, Palestinians sing traditional songs that they have heard their parents and grandparents sing, generation after generation.

One of these traditional songs tells the story of an exchange between a Palestinian father and son. Using rhyme and rhythm, the song goes,

You can get what you want from me (O olive tree), really our heart has been connected to the olive tree since we were young

My heart is connected to her [the olive tree], don’t talk like Al-Farazdaq [famous Arab poet], I am flying in the sky as if I am a pilot.

It would not be an exaggeration to say that olive trees are like children to Palestinians.  When my family wanted to tear down our house to build a new one, my aunt resisted the idea because we had to cut down two olive trees my grandfather planted some 35 years ago. My aunt cried when they cut the trees, and all our attempts to save them by planting them elsewhere didn’t succeed. Although we planted new olive trees later, my aunt would always speak of the two olive trees her father had planted, alongside which she grew up in our Gaza refugee camp.

Palestinian author Sarah Ali once wrote, “If a Palestinian bulldozer were ever invented (Haha, I know) and I were given the chance to be in an orchard in Haifa for instance, I would never uproot a tree an Israeli planted. No Palestinian would. To Palestinians, the tree is sacred, and so is the land clasping it.”

Today, the scene of olive harvest in Palestine is not only about family gatherings, traditional songs, and family bonds. The olive harvest in Palestine is about proving a connection to the land, a battle to maintain existence on the land as Israeli settlers – day and night – burn hundreds of olive trees as part of their ongoing attacks against Palestinians. Attacks that include stoning Palestinian cars, and burning Palestinian houses (with families inside), mosques, and churches.

These very Israeli settlers also move the olive trees they uproot to decorate the entrance of settlements built on Palestinian lands in order to prove their claimed connection to the land. The image of Palestinian Mahfoza Oude hugging an olive tree as a group of Israeli soldiers attempted to uproot it speaks of the Palestinians’ relationship with olive trees and the land.

Most of the olive trees the settlers uproot are older than the state of Israel, which was only declared in 1948 on the ruins of Palestinian cities and villages. These olive trees stand as a striking reminder to settlers of the history of Palestine, which has always been a land of peaceful religious co-existence, where a person like my mother, who was born in Bethlehem, the city where Jesus was born, still says “The cross has materialized” to mark the start of the olive harvest, without even realizing its meaning.

Although the situation for Palestinians is very grim on the ground, the increasing international solidarity for the Palestinian people – and their olive trees which attest to their history on this land – will continue to preserve this existence and culture.

Palestinian poet Tamim al-Barghouti said in one of his poems that a state that was built on enmity towards olive trees would not survive in the Levant. It is true. Darwish said, “If the olive tree knew [what was happening to] its planter, its oil would become tears.” The ongoing Palestinian commitment to the land, represented by planting more olive trees as Israeli settlers uproot hundreds of them, is telling that a future solution that ignores Palestinians and their connection and claim to the land is unlikely to see the light.

The future must unequivocally include the Palestinians. All Palestinian refugees and their descendants should be able to have breakfast on their lands which always has abundant olive oil. No more olive trees should ever be uprooted just because some Israeli settlers have decided to rewrite history.