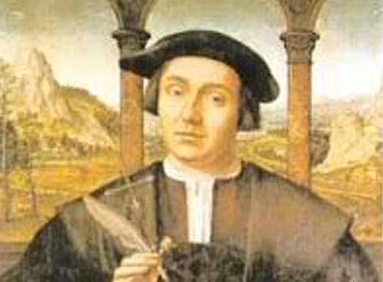 In 1972, the Holocaust survivor, celebrated Nazi-hunter, and ardent Zionist Simon Wiesenthal published a book in German titled Segel der Hoffnung that the following year came out in English under the title Sails of Hope: The Secret Mission of Christopher Columbus. This book was an apparently well-sourced account of the many Jewish dimensions of Columbus’s settler-colonial project. It is also openly laudatory of the entire project. (You can read the full text of the English-language version of the book, here.)

As I noted in this recent essay on Columbus’s voyages of “discovery” to the Caribbean, his principal backer at the court of Spain’s King Ferdinand and Queen Isabella was Ferdinand’s Finance Minister, Luis de Santángel. Santángel, shown in the banner image above, was a converso (converted-to-Catholicism)Jew who had seen some of his own relatives burned to death by the Catholic-supremacist Inquisition that the Monarchs were pursuing in that same exact time period.

In Sails of Hope, Wiesenthal devoted several pages to trying to establish that Columbus himself may also have been a converso. He admitted that he never fully made that case. But his book did present a very persuasive argument that one of the main goals of Santángel, Columbus, and others involved in Columbus’s project was to find a safe haven for Jewish survivors of the Inquisition.

The Muslim rulers who governed Spain prior to the arrival of the Catholic Reconquista had provided a generally welcoming, supportive environment in which Jews (and Eastern-rite Christians) had been able to thrive and reach the greatest heights of intellectual and artistic endeavor. But as the Catholic powers of Portugal and Spain — especially Spain — seized control of increasing parts of the Iberian Peninsula during the centuries leading up to 1492, they undertook harsh crackdowns on the remaining remnants of the newly conquered areas’ once-thriving Muslim and Jewish communities.

In 1478, the two Spanish Monarchs established the Inquisition as a special, investigative organization designed to “guard the religious orthodoxy” of their realm. And in 1492 itself, the year the Spanish Monarchs completed the Reconquista of the areas they claimed, they issued a decree that summarily ordered all Muslims and Jews still living in Isabella’s Kingdom of Castile to convert to Catholicism or to leave the kingdom immediately.

One of the continuing concerns of the Monarchs and their Inquisitors was that some of the people or families who claimed to have “converted” from either Judaism or Islam to Catholicism had not done so in good faith, but were still secretly harboring adherence to their previous religion or covertly practicing some of its rituals. That was where the inquisitors came in: their job was to ferret out any suspicion of such deception and to punish the conversos who engaged in it. English-Wikipedia cites an estimate that during the 300-year history of its operation, the Inquisition prosecuted around 150,000 people, “of which between 3,000 and 5,000 were executed.” And the terrorizing effects of the Inquisition were felt far beyond the numbers of those directly targeted by it.

We can see some interesting parallels between the actions of Luis de Santángel and the other conversos who backed Columbus’s project in the late 15th century and those of the more recent Zionists who reacted to the horrors of the Nazis’ anti-Jewish Holocaust by arguing that Jewish people should support a settler-colonial project in the non-European world in which they and their “Western” allies could create a safe haven for Jewish survivors of the recent terror. In both cases, the original anti-Jewish terror had been perpetrated by European Christians — but then, the proponents of both these “Jewish safe-haven” projects built them completely at the expense of the Indigenous inhabitants of the targeted area.

Simon Wiesenthal’s thesis of Columbus’s project as a “Jewish safe haven” project was taken up with gusto by a more recent Jewish-American writer, Edward Kritzker. He devoted the entire first chapter of his 2008 book Jewish Pirates of the Caribbean to a seemingly well-sourced celebration of the sizeable role that conversos had played in both Columbus’s original project in Hispaniola and a follow-on attempt that his son Diego and a converso called Juan d’Esquivel led in 1511–13, to establish slave-powered settler colonialism just south of there, in Jamaica.

Kritzker noted that many of the participants in those ventures were either conversos or “Portugals” — a term frequently used in those days to denote Jews, since many members of Spain’s former Jewish population had been temporarily able to find a more secure life in Portugal than in Spain.

Kritzker had no material in his book that referred to the broad suffering that Columbus’s voyages to the Caribbean inflicted on the Indigenous people of those islands, such as had long been available to any English-language historian, for example in historian David Stannard’s 1992 book American Holocaust. (Stannard noted on pp.74–75 there that the Indigenous population of the island of Hispaniola, which had been around eight million souls in 1492 had been halved by 1496, and that by 1535, “for all practical purposes, the native population was extinct.”)

Instead, Kritzker included in his book (pp.26–27) this glowing account of the early years of the settlement that Diego Columbus and Juan d’Esquivel established in Jamaica:

Despite the paucity of gold, island life was pleasantly rewarding. Jamaica was a fertile land, and the average allotment [under the encomienda/slavery system] of 150–200 pacified Indians per settler meant that one could have a successful ranching operation, made all the more comfortable by a harem of baptized Indian women….

[F]or more than a century [Columbus’s] heirs kept Jamaica off-limits to the hooded Inquisitors who were empowered to root out heresy in all Spanish territories. As far as Jamaica’s proprietors were concerned, as long as their “Portugals” wore a Christian mask, no one might question the sincerity of their religious beliefs.

In both those cases, joining a settler-colonial project that was built centrally on the dispossession or extermination of other peoples was not the only option the genocide survivors had. But both Wiesenthal and Kritzker openly supported and lauded the settler-colonial option.