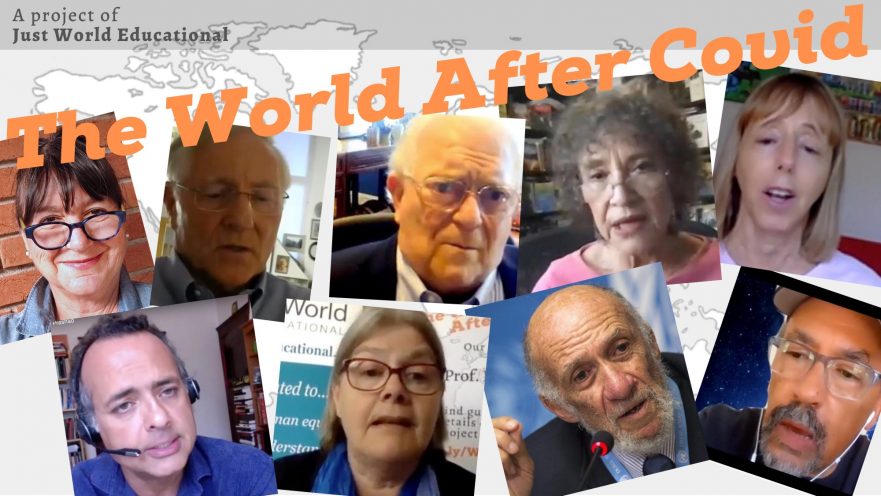 Back at the beginning of May, I started to look seriously on my personal Just World News blog at some of the ways in which the eruption of the Covid pandemic has been changing the dynamics of the global balance. I grouped the 13 blog posts that I wrote on the topic into the “Covid chronicles” collection. Along the way, I started some discussions on the topic with my valued colleague on the JWE board, Richard Falk; and on June 10 we launched JWE’s “World After Covid” project with an initial series of eight weekly webinars that explored different aspects of the way that Covid’s eruption had started to shift the global balance.

As we conducted each of these webinars, we posted an archived video of it– along with a transcript– onto the new “World After Covid” resource page on our website. That page now offers a rich record of the discussions I had with thinkers like Medea Benjamin, Bill Fletcher, Jr., Vijay Prashad, Chas W. Freeman, Hans von Sponeck– and of course, Richard Falk.

At our most recent JWE board meeting, we had a good discussion of the project, including of the name that I had– perhaps with too much haste?–put onto it. A couple of our colleagues (like some members of the public) pointed out quite rightly that we are not “After” Covid yet. Others also noted that some of the phenomena we discussed during the webinar sessions– such as the decline in the United States’ global power and the emergence of deep social/political fissures within U.S. society– had also antedated the eruption of Covid. All good points! I think we all agreed, though, that although Covid and its terrible, lethal effects are far from over, it has already been clear, since the early weeks of the pandemic’s emergence, that its effects have served to considerably exacerbate and accelerate some of those pre-existing trends in global politics and thus to significantly shift the global balance.

So for now, we’ll keep the existing name for this project… and over the coming couple of weeks I’ll be able to reveal the exciting plans we’re working on for its next phase, which will be launching soon.

In the interim, though, I’ve been going back to listen again to some of the conversations I was able to have with my guests during the first phase, which ran in June and July.

In our very first session, Richard Falk ably explained how he saw the importance of the changes wrought by the outbreak of Covid:

I do think that it has underscored the precariousness of life in a planet on a planetary scale. We became instantly vulnerable, without really much anticipation of the threat. And we were vulnerable as a species as well as individual nations, communities and the like.

So it is a reminder of the broader spectrum of vulnerabilities that have been very characteristic of this period, including the  whole nuclear arms race during the  Cold War, the 9-11 terrorist attacks. The pandemic in a sense was just one more reminder. Climate change had been very much on the public consciousness prior to the pandemic – just one more reminder that we need a much more globally co-operative system of world order if we have any realistic hope of coping with these challenges that exceed the capabilities of individual States.

In my response, I noted that the population of the United States is only four or 4.5 percent of the totality of humankind… and then, I shared a few charts on the early effects of Covid that I had previously used in my own blogging. One of those was the then-current report card on “deaths per hundred thousand people” in different countries in the world. I noted that (at that time),

all those countries that have a deaths per hundred thousand people that is 20 or higher to this date, all except Ecuador are advanced capitalist countries. So is there, what is there about capitalism as a model? That means that its people die. We die, you know?

… So people are asking a lot of questions, not just about the United States’ role in the world, but also about the way we have been organizing economic and social life for the last 400 years. I don’t know whether this is something that it’s too soon to talk about, but I’m sure you’ve thought about it a lot, Richard, over the years. What could we do that is better than capitalism?

the critique of capitalism without a sense of how to restore some kind of humanistically oriented socialism is very difficult.

China points to a very dynamic, resilient economic configuration that has had remarkable results from a perspective of growth and lifting its poor out of deep poverty. It’s been a very authoritarian model, but it’s shown that the relation between state and the private sector is quite key in managing a viable kind of economic set of policies. China is a soft power superpower, which is the first in world history.

And the U.S. is mired with the heavy burden of being a failing militarist, hard power, superpower. And I think part of its decline is this interaction between what I’ve been calling predatory capitalism and a militarism that no longer works in the sense of prevailing politically in the ongoing struggles around the world. Because of the militarization of the state, we’re unable to absorb the lessons of recent history going back to the Vietnam War, that military superiority very rarely results in political outcomes that can be called victories.

Most recently, Afghanistan and Iraq are examples where the U.S. has wasted trillions without even mentioning the human costs for Iraq – and the U.S. – and the results are less satisfactory than what would have existed had nothing been attempted. So I think you can’t separate a critique of militarism from an understanding of American economic decline.

So I hope you can get a sense of the quality of the discussion we had… If you go back to our “World After Covid” resource page, you can listen to the whole session there…

By the way, the numbers for “deaths per 100,000” of population that I used there were the figures from early May. I looked at the latest figures today, and they are all considerably higher. The figure for the United States is currently 59 deaths per 100K. Here are the countries at the “top” of the deaths-per-100K league:

Of note here now is the fact that all the countries with a rate of higher than 35 are either “Western” countries or countries/territories in Latin America and the Caribbean that are part of Washington’s longstanding “Monroe Doctrine.” Yes, there are are several countries that fit one or the other of those characteristics that have deaths-per-100k rates that are considerably lower than 35. But still, this record is one that should be extremely thought-provoking for citizens of “Western” countries.

One final note here: We launched the first phase of our “World After Covid” project back in early June, and by the end of July we had created and presented a considerable body of useful and accessible educational material on this topic, on our website at no cost to the public.

I saw that two days ago, the extremely well-funded “Carnegie Endowment for International Peace” finally managed to get a collection of materials up onto their website, under the rubric “The Day After: Navigating a Post-Pandemic World” that look at the same kinds of issues. The Carnegie Endowment has assets of $340.67 million and last year spent $39.05 million on their programing. Their President, Bill Burns, pulled in compensation of $544,722.

By contrast, JWE has annual budgets of under $50,000. Like all the other board members, I perform my service to the organization completely pro-bono. This does enable us to be very agile, wide-ranging, and beholden to no “big” donors or backers. However, if we had a stronger financial base, imagine what more we could do!

If you support our programing, please consider making a one-time or recurring donation to help boost our work. Information on how to do so is at the “Donate” tab at the top of our website.