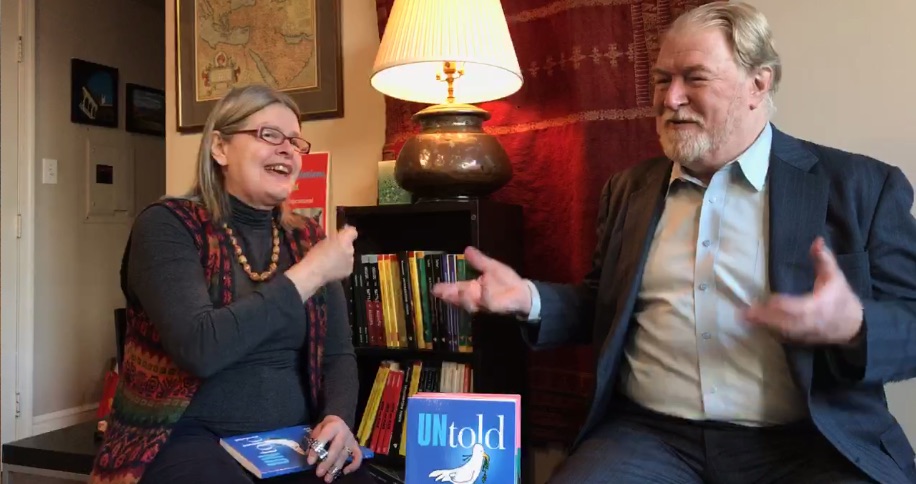 In late January, Just World Educational brought veteran UN watcher Ian Williams to Washington DC, to discuss US-UN ties (in general) with members of the city’s World Affairs Council. We also took the opportunity to record a 37-minute “Facebook Live” discussion he held with JWE President Helena Cobban on the more specific topic of the impact this relationship has on current developments in the Middle East. (See a screengrab from this discussion, above.) 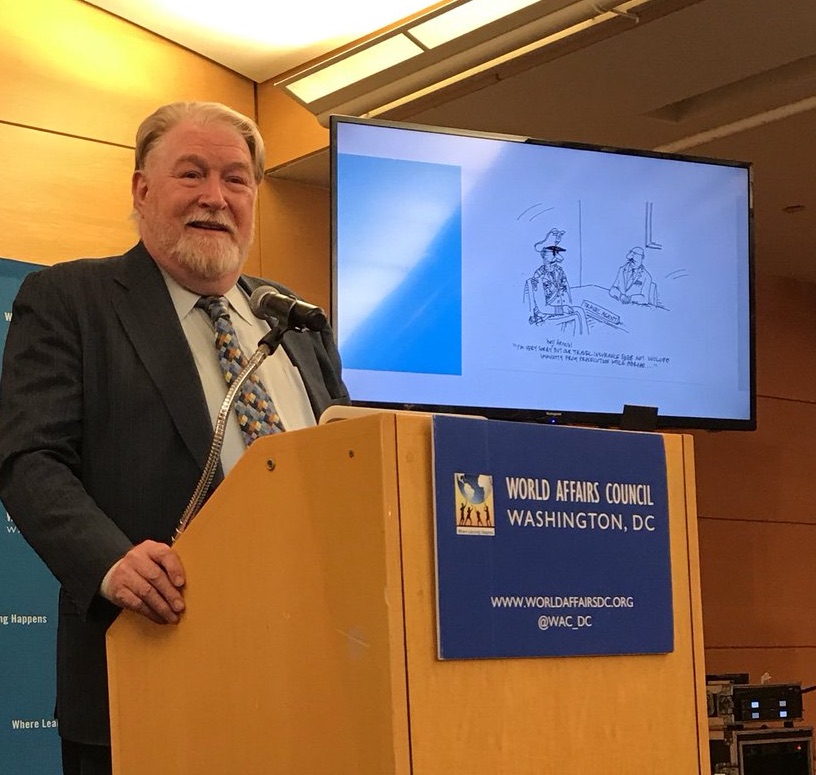 Williams talking, with some of the cartoons from his book shown on the screen behind him.

These events were part of our continuing speaker series on “The US, the United Nations, and the World”, which we have designed along with Mr. Williams in order to spur discussion and understanding of the role of the United Nations at this crucial point in the history of the United States’ relationship with it.

Mr. Williams is a well-regarded journalist who has covered the United Nations for nearly 30 years for outlets from around the world, including The Guardian. He is also the author of a super-engaging new illustrated primer, UNtold: The Real Story of the United Nations in Peace and War.

The World Affairs Council session was strongly attended, and the audience engaged deeply with the issues Williams raised, asking many great questions during the Q&A period.

In his main presentation, Williams provided a brief survey of the history of the United Nations, noting that shortly after its inception in 1945 it was the key sponsor of the seminal document, the “Universal Declaration of Human Rights.” He noted that the UN has a “unique legitimizing power”, pointing in particular to the fact that only the United Nations that can grant any meaningful recognition of Israel’s claim that Jerusalem is its capital. 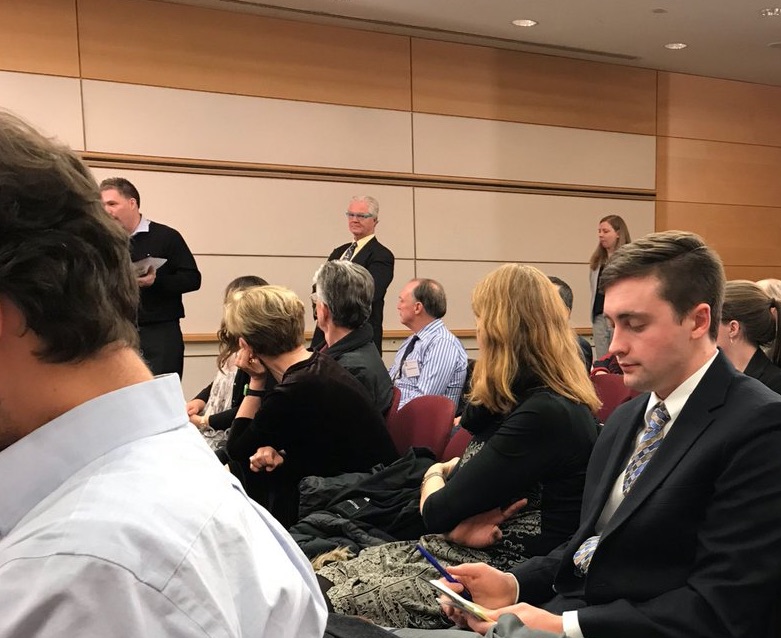 Questioners lining up, as audience members listen to their questions.

He called on citizens of all countries to stay well informed about the policies that “their” representatives at the United Nations are pursuing there. He recalled  that soon after citizens in Britain became aware that the lawyer who had advised Tony Blair that the 2003 invasion of Iraq could be considered legal had been named to the (UN-related) International Court of Justice, they successfully lobbied to have that nomination blocked.

He admitted that there have been instances of fraud, waste, mismanagement by UN officials. But he said that the big fraud allegations launched against the organization in the mid- to late aughts in connection with the alleged “Oil for Food Scandal” were part of an  orchestrated campaign to punish then-Secretary General Kofi Annan for the fact that he had openly judged the 2003 invasion of Iraq to be illegal.

The evaluation forms that we collected after the WAC-DC event were uniformly laudatory. One attendee wrote, “Everything about the UN speaker is absolutely wonderful. Knowledgable, and a great communicator.” Another described the event as, “Very informative and intellectually stimulating.” Everyone who submitted forms said they “would be inclined to recommend JWE programs to friends or colleagues. 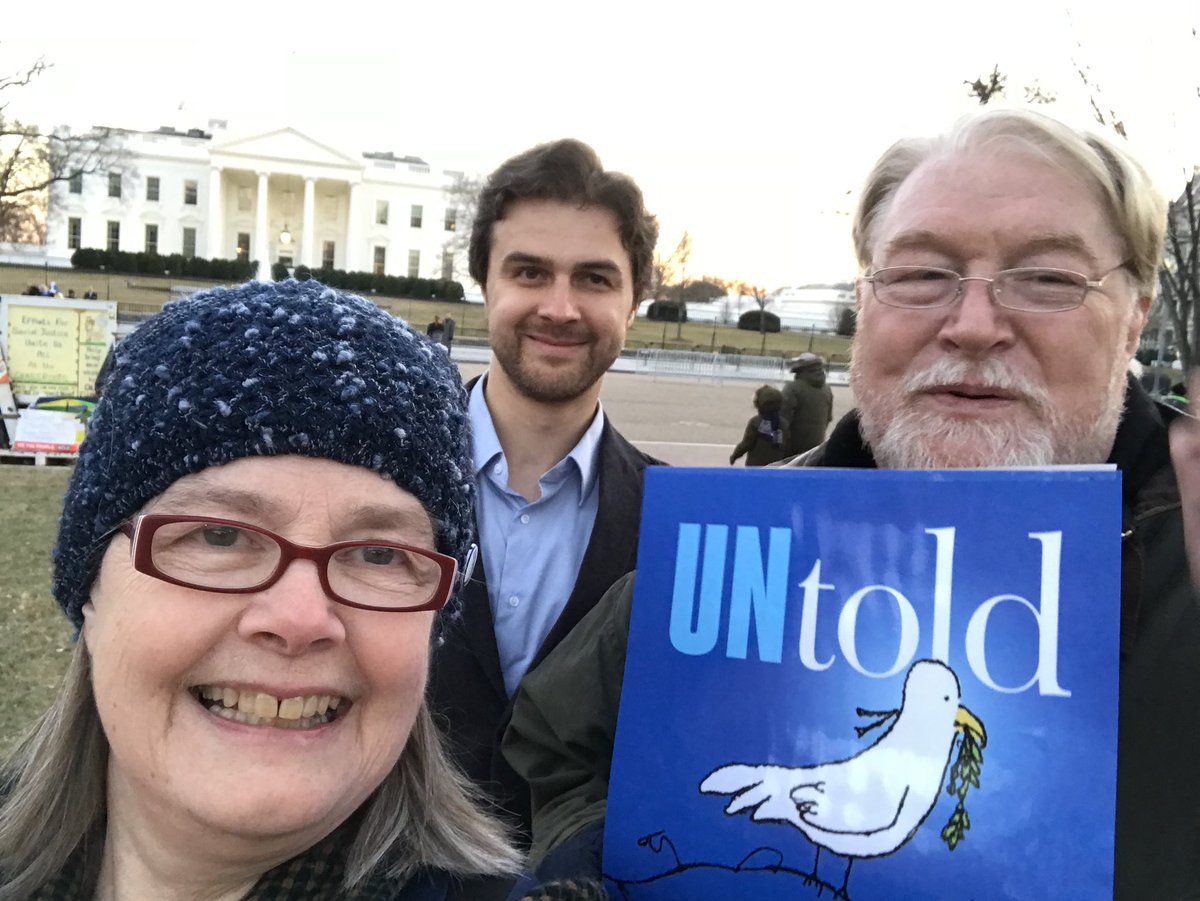 … The following morning, Williams joined JWE President Helena Cobban in the Facebook Live” discussion on the US, the United Nations, and the Middle East. Their lively, 37-minute conversation, which can be viewed here, ranged over topics that included:

Ms. Cobban brings to her position at JWE a long history as a writer and researcher on international and Middle Eastern issues, including 20 years contributing a regular column on global affairs to The Christian Science Monitor, and the publication of seven sole-authored books.

In his consideration of the impact of US-UN relations on the Palestine issue, Williams noted that Palestine has been a core concern of the United Nations since its earliest years; and that throughout the decades since its creation, the organization has held fast to the principle of the inadmissibility of the acquisition of territory by force.

He noted that only the United Nations (not the United States) can confer meaningful recognition of Jerusalem as Israel’s capital– but also that the Jerusalem issue functions as a potent “fundraising tool” for Zionist organizations, especially inside the United States.

He said that at present, both the US and the Israeli ambassadors to the UN are using their grandstanding at the world body to attract donors and support for their even higher political ambitions within their respective countries.

He gave a trenchant analysis of the role of the Middle East “Quartet”, formed under Pres. George W. Bush’s leadership in 2004, saying that under the aegis of the Quartet, “The UN has become a fig-leaf for US policy in the Middle East.” He noted that there was no formal resolution in either the Security Council or the General Assembly by which the UN had agreed to join the arrangement, and he saw a diminishing role for it. “The Quartet will either stay around like a festering zombie,” he said. “…Or, it will fade away.”

Regarding the war in Yemen, he noted how hard it has been for the Secretary General, the Security Council, and other bodies to do anything effective to rein in the bombing of the country by the powerful, Saudi-dominated military alliance that has operated there for nearly three years now, inflicting truly terrible, multi-pronged humanitarian crises on the country’s population. He also noted the role that Saudi Arabia’s de-facto alliance with the pro-Israel lobby has played in protecting Saudi Arabia from UN criticism or sanctions.

As in all of Williams’s public speaking gigs, his Facebook Live discussion was engaging and deeply informed– and he laced it with many of his characteristic witticisms. We strongly recommend this short video, as well as Williams’s book, to anyone seeking a deeper understanding of the UN’s role in the Middle East and how Washington’s tangled relationship with the United Nations impacts the region– and also, indeed, the whole of the rest of the world.

If a community group or educational institution that you’re affiliated with would like to invite Ian Williams to come and speak about “The US, the United Nations, and the World,” please contact our Outreach Director, Steve Fake.

We would be very grateful for any financial contribution you can make to JWE, that can help make this project and others like it as successful as possible.

You will find directions for donating by check, Paypal, or credit card at this page on our website.