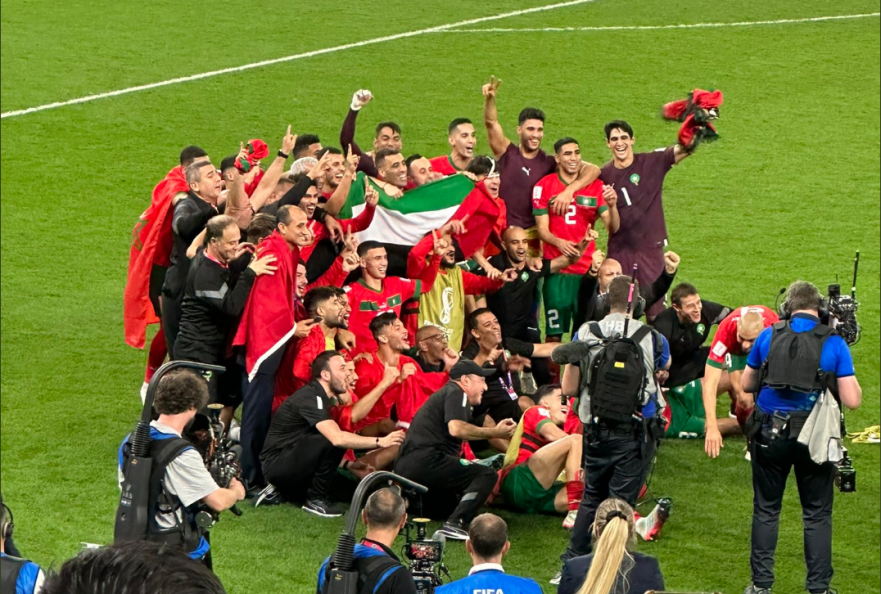 As the FIFA 2022 World Cup in Qatar kicked off on November 20, 2022, and with hundreds of thousands of football fans across the globe making their way to the Gulf country to attend the significant sports event, Israel seems to be the only loser of the tournament. Here is how Israel lost the battle of public opinion at the FIFA 2022 World Cup in Qatar.

Four Arab teams had qualified for the World Cup, namely Qatar, Saudi Arabia, Morocco, and Tunisia, and the solidarity with Palestine expressed through the waving of Palestinian flags or wearing the traditional Palestinian keffiyeh was very visible not only at the matches of the Arab teams but at matches of other teams as well as in the streets. Football fans who came from all over the world persistently expressed solidarity with Palestine.

Israeli media coverage of the World Cup has shown that fans from Japan to England have expressed solidarity with the Palestinian people by either chanting “Free Palestine” or refusing to speak to Israeli media about their experience during the World Cup.

Should we be surprised?

The truth is that many Palestinians are astonished that Israeli media crews were surprised by the treatment they received at the World Cup. There is no explanation for the Israelis’ surprise other than the general feeling of isolation many Israelis experience today as a result of being out of touch with reality and their inability to see the implications of 74 years of occupation and displacement, and what these years have meant for the Palestinian people.

In contrast, Palestinians are not surprised by this wave of solidarity, which was especially remarkable this year as it coincided with the International Day of Solidarity with the Palestinian People on November 29.

Israeli successive governments have historically normalized ties with certain Arab governments, but not with the Arab peoples. The Israeli government, and some people in Israel, were always aware of this fact, but they tried to sell a different narrative to the Israelis, namely that the publics in the region are also fond of having ties with their state in its current form. The World Cup in Qatar has just proved the exact opposite.

In the span of one week from November 28 to December 3, Israel has killed 10 Palestinians. The latest of Israel’s victims was Omar Manaa, 22, who was killed near the West Bank city of Bethlehem. This year, Israel has killed around 150 Palestinians and its forces continue to break into Palestinian towns and cities every day, leaving behind more wounds that time cannot heal.

On the contrary, in fact, he might have felt that he would be rewarded for his action. Itamar Ben Gvir tweeted that he supports the soldier’s “heroic act.” This is the current state of Israeli politics: Palestinians have to choose between right-wing politics and extreme right-wing politics. Ben Gvir, who was once banned from practicing law for his radical views and later defended settlers who assault Palestinians when the ban was lifted, is most likely to serve as Israel’s next national security minister with unlimited powers.

On December 4, Palestinians woke up again to the sounds of Israeli airstrikes in Gaza, targeting the coastal enclave, which has been under a tight Israeli siege since 2007. The discourse of Israeli politicians today resembles that of the founders of Israel who were more open about their Zionist ideology that was based on the removal of the Palestinian people by force in order for the Zionist dream to come true. Today, we are back in the era of the iron wall, where Israel brags about the use of force to get Palestinians to surrender.

Solidarity with Palestine and the way forward

The FIFA World Cup in Qatar has shown once again that the issues of Palestine and the injustice its people have been and are still suffering are alive in the hearts of many people across the globe. The World Cup in Qatar sent the message to Israeli leaders that lasting justice will only be realized when Palestinians are given their rights back and the wrongdoings of the Nakba are reversed without further delay.

Football fans in today’s world can’t be separated from politics. In fact, stadiums have always been used to express political messages and the message from the stadiums in Qatar was loud and clear: the Palestinian people will eventually be victorious and have equal rights on their land.

Palestinians were not surprised by this transnational wave of solidarity, as this has always been the case. Israeli leaders have to finally wake up from their Zionist dream, give up its exclusive ideology that denies the Palestinian people their rights, and confront the reality on the ground.

That reality ascertains that much of the world is fed up with Israeli practices and policies which are exposed to the rest of the world via social media on a daily basis, and defending killing Palestinians for no reason has become increasingly transparent and unsustainable.

Even Israel’s close allies can no longer explain its behavior. As the tide is changing, it is high time to end the exclusive system Israel has created and allow Palestinians to enjoy their full rights. Most likely, Israeli leaders will continue to lecture the world from their ivory towers.

However, as the global solidarity with Palestine at the FIFA World Cup in Qatar has shown us, this approach has grown old, and Palestinians might in fact enjoy their full rights sooner rather than later despite the wishes of right-wing politicians in Israel.