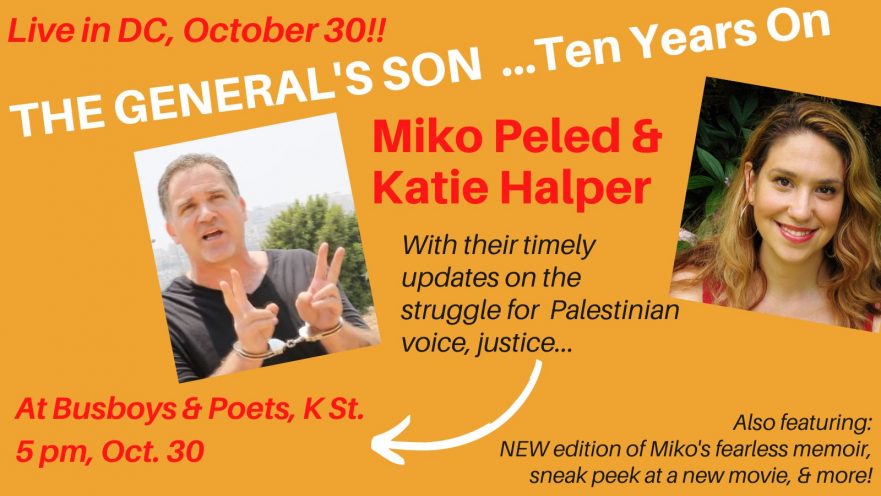 The fearless Katie Halper will be joining Miko Peled at the live event in DC on October 30 at which he’ll be launching the new, improved Tenth Anniversary Edition of his 2012 memoir The General’s Son: Journey of an Israeli in Palestine. (The event will also include a sneak preview of clips from the upcoming feauture-length film that film-maker Jordan Karr-Morse has been making, based on the book.)

Katie Halper was the gutsy online commentator and analyst who was abruptly fired in late September from her three-year gig as a commentator for The Hill because she came out swinging in defense of U.S. Rep. Rashida Tlaib and Tlaib’s (very well-authenticated) claims about Israel being an Apartheid state.

But Halper’s online presence has only grown since then! Her YouTube channel had more than 83,000 subscribers the last time we looked. Last week, she had Miko on as a guest, along with Palestinian community leader and legal analyst Noura Erakat. (Miko’s portion started 40 minutes in.) … Now, both Miko and Halper are delighted that our October 30 event will give them the chance to get together in person to discuss the many ways in which everyone– including people like the two of them who happen to be Jewish– can organize together to end the structurally racist and exclusivist project of Zionism and the destructive grip it still has on so much of American discourse, society, and decisionmaking.

We regret we won’t be able to livestream the Oct. 30 event. But Miko and Katie will be appearing live together in New York City on November 15 (6:30 pm at the People’s Forum, 320 W. 37th St, Manhattan)… and that appearance will be livestreamed at “The Katie Halper Show”.

Plans are also underway to organize Miko Peled events based on General’s Son’s  new edition in Southern California, and other spots in the United States (and globally?) Stay tuned for those, too!