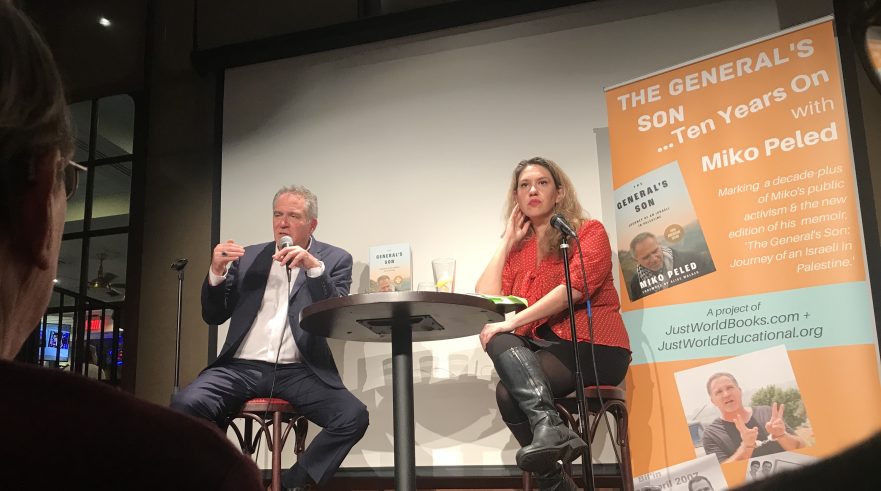 The courageous and insightful commentator Katie Halper came to Washington DC October 30 to help author and activist Miko Peled launch the new edition of his memoir The General’s Son: Journey of an Israeli in Palestine. This new edition marks ten years since the first edition of the book came out. The Oct. 30 event with Katie Halper at Washington DC’s famed Busboys & Poets performance space gave Peled the chance to reflect on the events that had led him to write the book and on some of the adventures it has led him into since its initial publication in 2012. The two activists also discussed current issues in Palestine and elsewhere.

(Halper and Peled will be appearing in person together again on November 15, in New York– at 6:30 pm, at the People’s Forum, 320 W. 37th St. That event will also be livestreamed on “The Katie Halper Show”. Mark your calendars now!)

The attendees who crowded the Busboys space on October 30 were welcomed by Busboys owner Andy Shallal, and then by Helena Cobban, the founder and CEO of Just World Books. There were then two notable happenings before the Halper-Peled conversation got underway. First, Martha Leslie Allen of the Women’s Institute for Freedom of the Press presented Halper with an award for courage, for her insistence on speaking openly about Israel’s status as an Apartheid state and in defense of remarks Rep. Rashida Tlaib had made on this matter.

Then, attendees were treated to an exclusive nine-minute clip from the feature-length movie that film-maker Jordan Karr-Morse has been making about Miko’s journey into pro-Palestinian activism. Here are a couple of great stills from the clip:

After the movie, Halper led Peled in a searching hour-long conversation that, along with the lively Q&A session that followed, plumbed numerous serious topics including these:

We note that Peled had dealt with some of those topics at some length in The General’s Son… So do please buy and read the book! But it was fascinating to hear Halper draw him out even further on all these issues.

As the evening drew to an end, Shelley Cohen Fudge, an organizer with the DMV Chapter of Jewish Voice for Peace, took the stage to describe actions the chapter is taking to try to persuade the leaders of Montgomery County, Maryland, not to adopt the controversial “IHRA” definition of anti-Semitism, which defines most forms of criticism of the Israeli government as ipso facto constituting anti-Semitism.

. ..The October 30 event was the first in-person event Just World Ed has presented for roughly three years. We are delighted with the way it went, and deeply grateful not only to the two headliners but also to all the partners who made it so memorable!

We are hoping to provide a fuller account of the evening’s discussion, if possible. However, the upcoming Halper-Peled discussion in NYC, November 15, will be livestreamed and also recorded. So we hope that everyone interested in what these two gutsy justice activists have to say on matters Palestinian can either come to that event in person, or catch it on “The Katie Halper Show”!