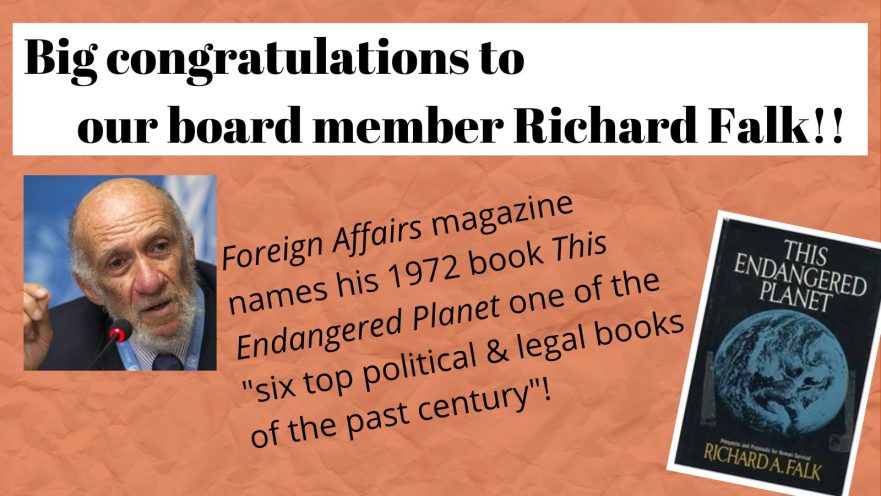 We all send our deep congratulations to our board member (and friend), the distinguished international jurist Richard Falk, for having his 1971/1972 book This Endangered Planet named by Foreign Affairs magazine as one of the six top books of the past century in the “political and legal” category.

This designation was made as part of an effort to mark the 100 years of publication of Foreign Affairs, a leading journal in the field, which is published by the New York-based Council on Foreign relations. In announcing it, Foreign Affairs editor G. John Ikenberry wrote:

In the early 1970s, a variety of thinkers began to offer warnings of the planetary-scale dangers generated by human activity, introducing terms such as “limits to growth” and “spaceship earth.” Falk’s evocative and illuminating 1971 book sounded the alarm and triggered a debate over the reform of the global political order. He argued that the threats to humanity were coming from a set of interlocking features of late-twentieth-century modernity, such as environmental degradation, militarization, population growth, and resource depletion—factors that were driven by the industrial state, military competition, and materialist ideologies of progress. For Falk, the world of sovereign states, with its nationalist impulses and short-termism, was the deep source of the global predicament. He called for a revolution in consciousness that would reimagine how peoples and societies could organize themselves for sustainable life. Falk hoped for a profound transformation in political organization beyond the constraints of nation-states and multilateral bodies, one driven by social movements and a global civil society in the service of “ecological humanism.”

We are all thrilled by the designation! Prof. Falk’s work over the past 65-plus years has covered many different aspects of the current international situation, as a glance at his bibliography will indicate.

Speaking personally, I’ll note that I have always found it both a great pleasure and a source of continual inspiration to have worked closely with him on several projects over the past dozen years. When we founded Just World Educational in late 2015, he was one of the first to accept my invitation to serve on our board, where he continues to serve with creativity and distinction. (You can find many of Falk’s recent writings posted here in the Just World Ed blog.)

In late February of this year, he and I jointly planned and then co-hosted a series of eight webinars on the crisis in Ukraine that we offered to the public throughout March. The multimedia records of those consultations can be found here. We also prepared a 32-page printed report of the consultations, to which we appended a list of eight policy recommendations jointly agreed by the JWE board, the most notable of which were our call for a “Ukraine-wide ceasefire now!” and the start of negotiations on lasting peace arrangements for Ukraine.

With Falk’s great encouragement, we then undertook an important follow-on project on “The Urgency of a Nuclear Weapons Ban”.

Last year, Falk published a fascinating memoir, Public Intellectual: The Life of a Citizen Pilgrim. I hope that in the near future we can organize a good discussion with him on many aspects of the rich series of contributions he has made to building a more just and peaceful world!