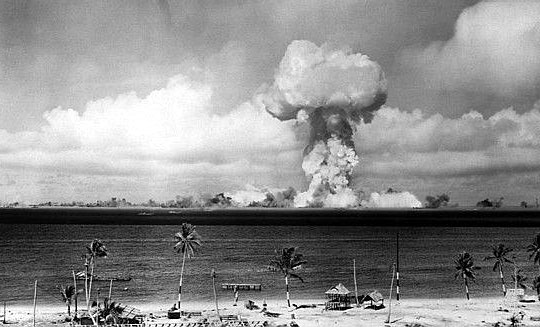 On August 6, 1945, the U.S. Air Force dropped a single atomic bomb over the Japanese city of Hiroshima. The bomb had the explosive power of some 15,000 tons of TNT. It ignited a fire- and wind-storm that destroyed everything in the city except a few unusually sturdy structures and released plumes of radiation that lodged in the earth and water, lingering there for many years.

That single bomb resulted in around 200,000 deaths. Three days later, the U.S. used a different design of atom bomb against the city of Nagasaki, with similar results.

The use of those two bombs against cities whose residents were overwhelmingly civilians ushered in the era of nuclear terror in which we still live. In this era, the leaders of a handful of nations each commands the power to– with the click of a button or a swipe on a computer screen– wipe out all human life on earth while permanently deforming the rest of this planet’s ecosphere.

This state of affairs is beyond serious. But for many years now, few people in the west have given it much thought. Indeed, many citizens of “Western” nations who came of age after the “Cold War” against the Soviet Union was ended in 1990-91 never felt the need to learn much about the nuclear-war risks that continued– and continue to this day– to undergird the whole world’s (in-)security system. In popular culture, when the possibility of nuclear conflict was addressed at all, this too often happened in a dangerously trivialized way.

Have you ever conducted an online search for “nuclear videogames”? There are scores of them out there, all pulling in, one assumes, great riches for their creators while increasingly numbing their players to the real and continuing dangers of a planet-wide nuclear holocaust that could be sparked by intention, or even quite “accidentally”.

I want to write here about another example of nuclear trivialization that is far more deeply embedded in Western culture than any of those nauseating videogames. That is, the use of what I like to call “the B-word” to refer to two-piece swimsuits.

This use of the term “Bikini” dates back to July 1946, just four days after the U.S. military used the Bikini Atoll in the South Pacific’s Marshall Islands chain, to conduct the first of a series of tests of a new generation of nuclear weapons that were (are) significantly more destructive than those used in Hiroshima or Nagasaki. These are the “thermonuclear” or fusion-type bombs.

The Marshall Islands chain lies between Australia and Hawai’i. The Bikini Atoll lies near the western end of the chain and is itself a roughly oval collection of islands and just-underwater reefs some 22 miles by 12 miles. (They are the remains of the rim of a massive, long-ago volcano, now nearly all submerged.)

Bikini Atoll’s Indigenous people had been the target of intermittent colonial “exploration” visits and raids since 1788 CE. For a while, German colonialists controlled the area as part of the colony known as German New Guinea. It was the Germans who gave the name “Bikini” to both the atoll itself and the largest island within it. (They had modified this name from the Indigenous name for the island, Pikinni, which means a “surface of coconuts.” A place of natural plenty, it seems.)

During the Second World War, at first the Japanese occupied the atoll, then the U.S. Navy seized it. The United States has retained over-all control of the atoll, the rest of the Marshall Islands, and many other island chains in the South Pacific ever since. In 1979 Washington granted a degree of self-rule to the “Republic of the Marshall Islands”, but the republic remains heavily dependent on the U.S. in many ways.

In 1945, in the lead-up to the Americans’ use of the Hiroshima and Nagasaki bombs, the country’s weapons developers had conducted just one test of their infernal new device. They did that on July 16, 1945 in the mainland United States, near Alamogordo, NM. Then, after the war ended, the U.S. military decided it also wanted to test some of its new, much more dangerous designs– and to do so far away from the homeland. They chose two sites in the Marshall Islands for this honor: Bikini Atoll and Enewetak Atoll, and carried out many tests there between 1946 and 1958.

The first of those test detonations, “Able”, was conducted over Bikini Atoll on July 1, 1946. The effects of that test and the many that followed there were devastating.

In early 1946, 167 Indigenous people still lived in Bikini Atoll, supporting themselves with fishing and cultivation. This page on Wikipedia tells us that in February, the U.S. Governor of the Marshall Islands ordered them all to leave, “for the good of mankind and to end all world wars.” The next day, the U.S. Navy moved all the islanders and whatever they could carry with them 128 miles (206 km) east to the uninhabited Rongerik Atoll, where they began an exile that turned out to be permanent.

In 1974, three Bikini families returned to the atoll, but after four years of eating the radiation-contaminated food available there they had to be evacuated again. Today, 76 years after the first of those atomic tests and 64 years after the last of them, the atoll remains uninhabitable.

It seems that back in July 1946, the U.S. military was pretty eager to publicize the effects of the first test in the Bikini Atoll. Within days after the test, the name of the atoll was picked up by a clothing designer in France called Louis Réard and applied to the revealing new two-piece swimsuit he was launching.

His swimsuit was an immediate, smash hit. Wikipedia tells us that, “Réard hoped that his swimsuit’s revealing style would create an ‘explosive commercial and cultural reaction’ similar in intensity to the social reaction to 1946 nuclear explosion at Bikini Atoll.” One fashion historian later wrote that Vogue editor Diana Vreeland called the creation “the atom bomb of fashion.” (He also wrote that one Paris fashion writer bizarrely suggested that this design recalled “the image of a woman emerging tattered from the blast.”)

And the name stuck. Most people (including me, until recently) had no idea of its disgusting, weapons-glorifying origins. The “bi” part of it seemed almost a natural or logical way to refer to a “two-piece” item of clothing, and the “kini” part of it became an instantly comprehensible reference for other forms of swimwear: the monokini, the tankini, the burkini…

The gender politics misogyny of what happened in Paris in 1946 is also clear. A male fashion designer (with a background in mechanical engineering, fwiw) designed a piece of swimwear for women that showed the maximum amount of female flesh then acceptable to the community standards in that part of Europe… and he marketed it by using a term clearly understood at that time to refer to an “explosion”…

I propose we should launch a campaign to raise awareness of the odious origins of the “B-word” that is so commonly used in Western (global?) culture to refer to a two-piece swimsuit– and to all its derivatives, like tankini, burkini, etc. What is wrong with simply talking about a two-piece swimsuit, anyway, if that is what you want to wear, or to sell?

This campaign should definitely include efforts to understand and publicize the terrible harms that American nuclear-weapons tests caused to the people of the Marshall Islands– and to the “down-winders” of the tests carried out in New Mexico– as well as the outright obscenity of the whole concept of “nuclear deterrence” itself.

So, please, swimwear manufacturers and promoters of the world, can you tell us: Are you happy to be marketing a product that bears the name of an infamous series of nuclear tests?

Down with the B-word! And yes to building a nuclear weapons-free world!