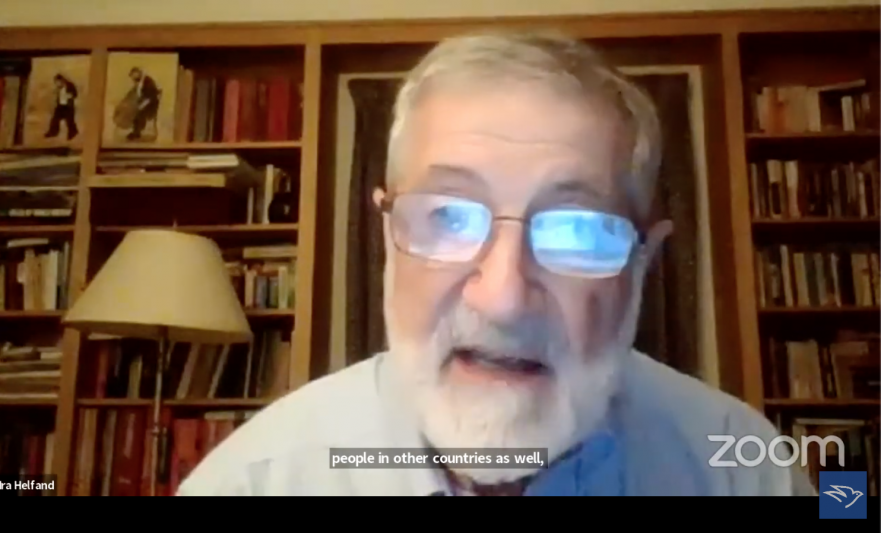 Last week, the Massachusetts Peace Action (MAPA) hosted a two-part Nuclear Disarmament Speaker Training Workshop. Both meetings were led by activist Ira Helfand, a member of the International Campaign to Abolish Nuclear Weapons (ICAN) steering committee and former president of the International Physicians for the Prevention of Nuclear War (IPPNW). He is also the co-founder and past president of Physicians for Social Responsibility, the US affiliate of the IPPNW.

These online training sessions were designed to support activists in effectively communicating to groups about the dangers of nuclear war and to address the education gap that stands in the way of a strong movement to eliminate nuclear weapons.

It was acknowledged by the organizers that, largely, young people have not been exposed to the denuclearization movement, and that even some of those who were active in the 80’s may have fallen into denial since the end of the Cold War. As such, these highly valuable sessions were designed to give concerned citizens, regardless of their familiarity with the issue, the information and resources they need to present to groups about nuclear danger.

Ira Helfand kicked off the first meeting with his own sample presentation, framed as “a refresher course on what’s at stake here.” In this he clearly laid out statistics on the issue of nuclear war by comparing nuclear weapon arsenals and by using models to describe the potential devastation of a nuclear strike, including the scale of the human health disaster and the global impact on climate that would ensue. To end on a hopeful note, Ira concluded the presentation by bringing up the ICAN’s work on the Treaty for the Prohibition of Nuclear Weapons and its success.

Drawing from his own experience as a prolific speaker on the issue, Ira then invited participants to brainstorm answers to frequently asked questions on controversial topics. Then, the meeting turned to discussing different ways of presenting the material. One of the concerns that came out of the conversation was that data-driven presentations or those relying too heavily on models and powerpoint slides could alienate some audiences by being inaccessible and too academic. Throughout, Ira stressed the need to adapt each presentation to its intended audience.

The latter of the training sessions, which ran for a little over 90 minutes, took place on Monday, July 24th, and was designed to get participants more comfortable with public speaking, writing op-eds and testifying at hearings and meetings.

Participants, which included educators, veterans, scientists and concerned citizens, gave original five-minute presentations that were directed at a variety of audiences. After, the presenters fielded commonly asked and sometimes challenging questions from the audience and were given the opportunity to receive feedback.

While some of the presenters were first time public speakers on the topic of nuclear abolition, others were educators and activists who, for decades, had been working to increase awareness. Presenters drew on different themes including, the myth of deterrence, the environmental impact, the risk of accidental strike and moral arguments against nuclear weapons.

The sessions were well attended, with the first training drawing 60 participants and the second around 90 and with the recordings of both trainings available on Youtube (Part 1 and Part 2), it is sure that these useful sessions will have significant reach.

Ira Helfand did an excellent job of sorting through the many presentations and helping members of MAPA create authentic and personalized presentations. This two-part workshop was also an important moment of community building as it was inspiring to hear many concerned activists emerging from different contexts. This powerful series of presentations works to strengthen our sense that the need to abolish nuclear weapons is more critical today than ever before.