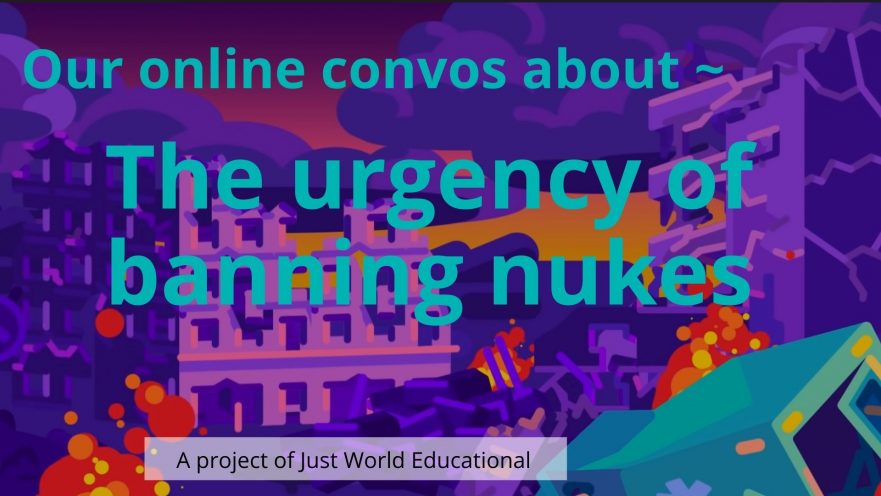 In the first, audio-only session of Just World Ed’s ongoing project on “The urgency of banning nukes”, nuclear physicist Ted Postol warned about the extreme fragility of the current nuclear “balance” and reminded listeners that just the land-based missile portion of Russia’s nuclear forces is capable of delivering between 4,000 and 6,000 “Hiroshima equivalents” to cities around the world. (The United States has nuclear forces of roughly similar destructive power.)

Postol is an expert in many aspects of designing nuclear weapons who worked at that task in high positions in the Pentagon before becoming a prof at, first Stanford University and then MIT.

You can find the entire 80 minutes of the conversation that JWE President Helena Cobban had with him on June 4, here. Be aware that the early parts of it contained quite a bit of technical fussing around as we were trying out a new platform for the event. (There was even a brief, unplanned interruption by the ghost of Tom Lehrer.) But from around Minute 14:00 on, the conversation was extremely serious and informative. For example, Postol noted that, “The nuclear forces of the United States are now unambiguously capable of destroying all of the land based missiles in underground silos that Russia has. The Russians know this…  And at the same time, the Russians have had some serious problems developing technologies they need for a, a modestly capable strategic early warning system.”

Cobban asked him, “Could you take a couple of steps back and tell us why it is that if the Russians are unable to survive an American nuclear strike, or if the Russians don’t have the early warning capability, why is that a problem for the rest of us?”

Postol’s reply: “Well if the Russians are worried that they will lose their entire land-based force there are other forces that they would have that would be able to respond to us. So they have submarine forces, they have bombers that may or may not be able to get off their runways, and they also have these underwater torpedoes, they call them Poseidons, that could basically sneak into our harbors and deliver nuclear weapons of gigantic yield. So it’s not as if they cannot respond.”

Soon after that, they discussed the comparison between the capabilities of the arsenals that Russia (and the United States) both command today and that of the single nuclear weapon the U.S. dropped on Hiroshima in 1945.

Cobban recalled that, “I have been to Hiroshima, where the United States launched a, a nuclear warhead of 12 Kilotons and they had it detonate, I think about 600 feet above ground level. And it was a test really, because they didn’t know the effects. But as anybody who’s been to Hiroshima or read about Hiroshima will know, the effects of that one 12-kiloton bomb were devastating throughout the whole of this large industrial city, to the extent that there was just that one structure that has a sort of dome on the top that was left. And the radiation effect continued. This was, I want to say, in year 2000 or maybe 2004, I can’t remember, but I met some of the aging survivors of that nuclear weapon. They call themselves Hibakusha and just to hear the stories of destruction of a 12 kiloton weapon was devastating.”

Postol said, “So let’s take a single 800 kiloton nuclear weapon from a Russian ICBM [Inter-Continental Ballistic Missile], an 800-kiloton weapon should set fires maybe to a range of up to five or six miles. It depends on some variables. So that means it, it could set an area of say 75 miles square miles on fire and the 12 and a half kiloton weapon [in Hiroshima] set an area of roughly four square miles on fire. So it means that maybe 20 times, 18, 17 times. So one of the bigger weapons from an ICBM is about, let’s for the sake of simplicity, say 20 times the number of of Hiroshima size weapons… Now if you carry five, let’s say you carry 10, warheads on an ICBM…That means a single, a single Russian ICBM can carry the equivalent of the destructive capability of 200 Hiroshima nuclear weapons. And if you say there are 300 of these weapons, this is all rounded. So… we’re talking about 5,000 or, or four to 6,000 Hiroshima equivalents on the Russian land based ICBMs. So that’s just the ICBMs. That’s not the other weapons… “

… Anyway, the conversation continued from there. It is definitely worth listening to the whole thing!