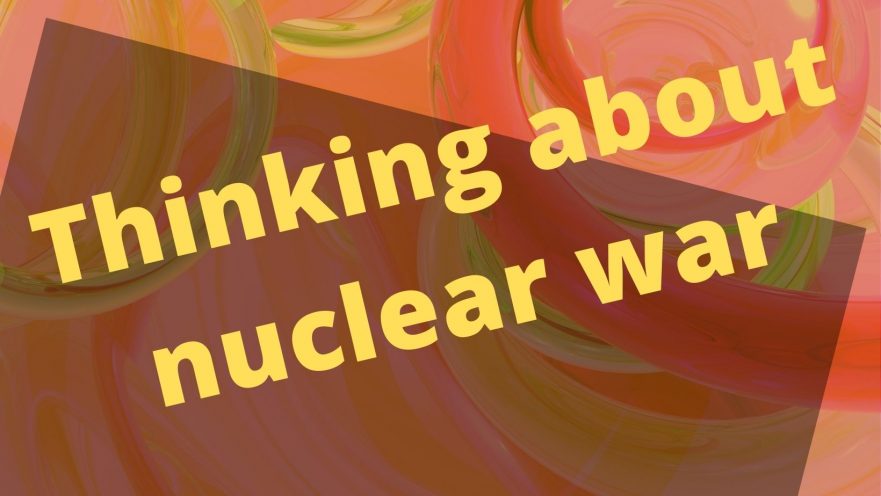 In the webinar series Just World Ed did on the Ukraine Crisis in March, one of the eight webinars (Session 8) started to address the nuclear risks associated with it. In the weeks since we had that discussion, the nuclear risks have not diminished. Indeed, Russia’s Pres. Putin went as far as issuing a couple of thinly veiled threats to the effect that if Russia’s “Red Lines” in the conflict were breached, then the world should remember that it could use certain “well-known capabilities”, and so on. Those reminders/threats were very analogous to the declarations that U.S. presidents have made periodically over the past 25 years to the effect that under certain circumstances “all options were on the table.”

The stark fact is that, 30 years after the largely peaceable end of “old” Cold War” the whole of humanity is still perched on the knife-edge of a possible nuclear exchange between the world’s two most heavily nuclear-armed powers, the United States and Russia. For many citizens of the United States, especially those under, say, 45 years old, this is a very unfamiliar situation. For the fact of Russia’s nuclear capabilities mean that our government today– and necessarily has to be– “deterred” from taking some military actions that, if the potential adversary were in or regarding Ukraine nuclear armed, it might consider taking.

After we wrapped up our Ukraine webinar series, two U.S. think-tanks held extremely informative, 90-minute webinars that looked in detail at the nuts and bolts of how nuclear deterrence (aka nuclear terror) is actually operating between Russia and the United States today. These were:

** “Will the Invasion of Ukraine Lead to Nuclear War?”, a discussion hosted by Brown University’s Watson Institute for International and Public Affairs involving military-affairs specialist Michael Klare and Dr. Ira Helfand, MD, the co-head of International Physicians for the Preventiuon of Nuclear War, that was moderated by military specialist Lyle Goldstein.

** “Threat of Use of Nuclear Weapons & Russia’s War on Ukraine: Meeting the Legal & Political Challenge”. This discussion was co-hosted by the Arms Control Association and a number of other organizations and featured:

If you have three hours to spare and can watch both of these recordings, then you should do so! If you can’t allot that amount of time right now, then I would recommend that you listen to these three presentations:

By the way, it’s very important to note that the first Meeting of States Parties to the Treaty on the Prohibition of Nuclear Weapons (TPNW), which entered into force only last year, will be held in Vienna, Austria June 21-23, preceded by an NGO/citizen conference running June 18-19 and a Conference on the Humanitarian Impact of Nuclear Weapons, June 20. Amb. Kmentt will be chairing first and third of those gatherings. Find more information about them here.