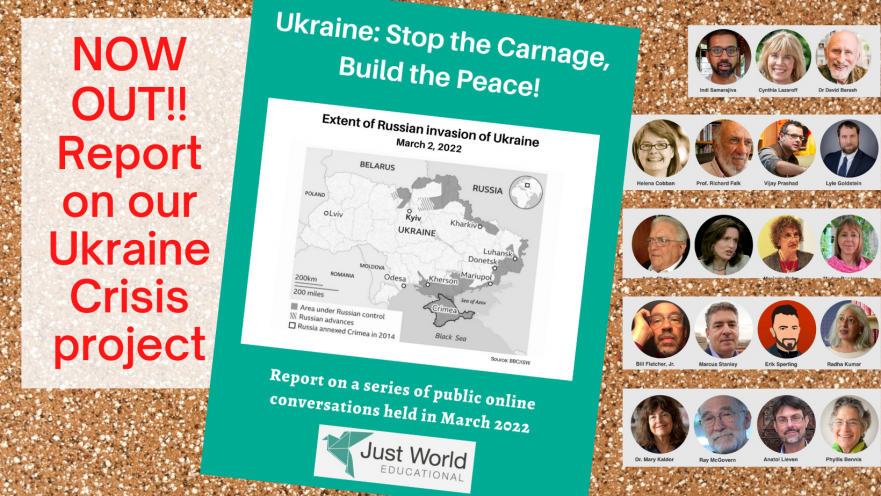 Just World Educational today releases copies of its new 32-page Report, “Ukraine: Stop the Carnage, Build the Peace!” This Report builds on the records of the eight webinars we held on the Ukraine Crisis back in March, in which JWE Board member Richard Falk and President Helena Cobban held probing conversations on different aspects of the Ukraine Crisis with 17 thoughtful and well-informed invited guests.

Click HERE to download a PDF of the full Report (1.2 MB), that you can read online or print at home. (Alternatively, you can buy copies of the printed report from Amazon for $5 each, HERE.)

At 2:30 pm ET on Tuesday, April 19, we’re holding a webinar in which Falk and Cobban will, along with several friends and colleagues, be giving our Report a formal launch. Please register in advance if you’d like to attend this webinar, which is free of charge to the learning public: Click HERE to do so.

Our new Report contains digests of the eight webinars that we held in March, along with a list of eight Policy Recommendations that members of the JWE Board felt grew out of those deliberations– though we realize that not all the participants in the webinar series will agree with all of them.

The first three of the Recommendations included in the Report are:

We are delighted that three other organizations have joined JWE to endorse our whole list of Policy Recommendations and have agreed to co-sponsor the Report. These organizations are:

Just World Ed has already, earlier, released an Online Learning Hub that contains the full digital records (videos, audio, transcripts) of the March webinar series. Those records and this new Report are complementary: between them, they provide a rich fund of resources for discussions and education that we hope you’ll find useful in your community group, classroom, or congregation.

Among the distinctive features of the webinar series, and of this Report, are the following: