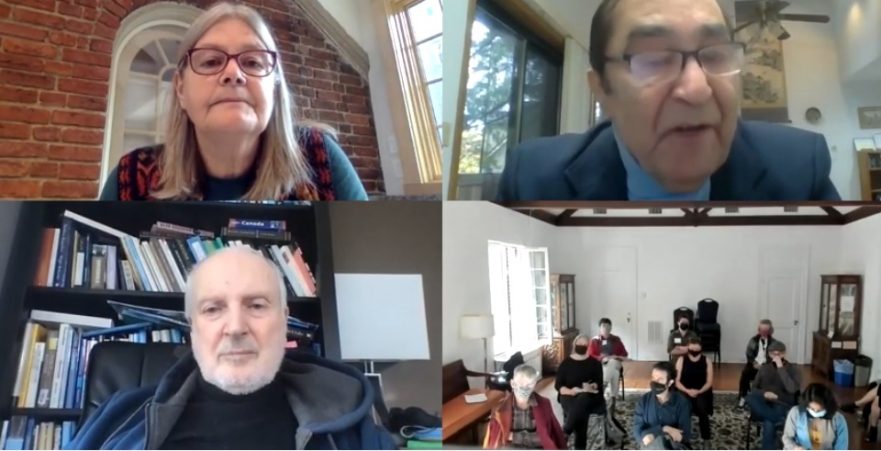 “The U.S. government urgently needs to release to Afghan authorities or U.N. bodies the billions of dollars of the country’s funds that are currently held in U.S. banks or the depositories of U.S.-dominated bodies like the World Bank or the IMF.”

~ That was the central plea voiced at a timely public conversation on Afghanistan that Just World Ed co-sponsored on October 31. The event’s primary presenter was the Peace and Social Concerns Committee of the Friends Meeting of Washington (FMW).

At this page on our website you’ll find both the hour-long video of the event and a transcript of what was said there. Our resource people were Afghan-American educator Dr. Zaher Wahab and Graham Fuller, a retired American intelligence officer with long experience of U.S. policies in Afghanistan. Dr. Wahab’s bio is here. And Mr. Fuller’s personal website is here. The conversation was moderated by JWE President Helena Cobban, a Quaker who worships with FMW.

Dr. Wahab launched the program with a searing description of the multiple humanitarian crises now unfolding in Afghanistan, concluding thus:

“Hundreds of thousands have been maimed. Millions have been displaced, four million have been internally displaced. People are hungry. They’re cold. Children are dying. The situation is desperate. As Antonio Gutierrez said, unless we do something fast, we’re on the verge to the biggest disaster in human history.”

Mr. Fuller looked back at the origins of the U.S. military’s presence in Afghanistan, dating back to the full-scale invasion of the country that Pres. George W. Bush ordered in response to the Al-Qaeda attacks of September 11, 2001. He recalled that, in the aftermath of those attacks, the Taliban rulers in Afghanistan seemed ready to negotiate the expulsion of Al-Qaeda from their country.

“Washington did not want to have any negotiations. I think Washington very much wanted its war, and furthermore, it [made] a good public case to state that we are going after Bin Laden. But I would suggest that there were much deeper reasons involved here, and that was to establish and maintain American global power…on the doorstep of Russia and China in Central Asia from which US could dominate as a hegemonic power that entire region.”

Later in the program, Dr. Wahab proposed a powerful eight-point program that concerned Americans should pursue in order to minimize the continuing harms being suffered by Afghanistan’s people in the wake of the United States’ 20-year military occupation of the country:

The panelists also discussed the situation of women in Afghanistan and the extent to which the U.S. presence brought improvements to their lives.

At the end of the program, Ms. Cobban informed attendees about a project that FMW’s Peace and Social Concerns Committee had launched, to help boost the emergency feeding projects the World Food Program is now urgently pursuing throughout Afghanistan. The Committee would, she said, match any donations attendees would make to these projects via FMW’s website. (That donation-matching project has now been fully met. But, she noted, people could also choose to give directly to the World Food Program.)

As Ms. Cobban noted during the webinar:

“Feeding people in the aftermath of war is a long Quaker tradition that goes back to the First World War. It probably goes back to the Civil War here in the United States. And it’s always been something that we wanted to do because we know that wars hurt women, children, [and] the most vulnerable members of society, including by inflicting starvation and hunger on them.”

We invite you to explore and share not just the video of the October 31 event and its transcript (both available here) but all the background resources we have put onto the Just World Ed website on the topic of post-U.S. Afghanistan, which you can access here.