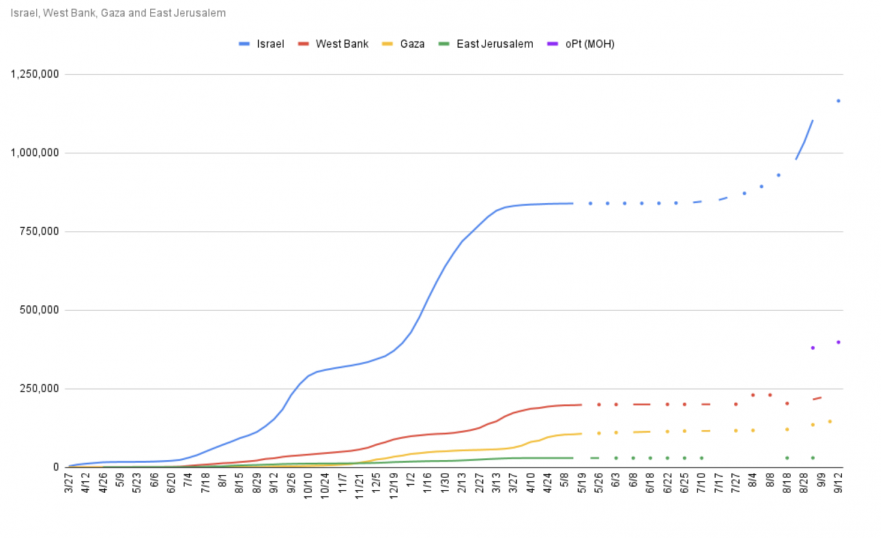 We’re pleased to repost this weekly report by JWE board member Alice Rothchild, MD, which was earlier posted by the Jewish Voice for Peace Health Advisory Council (JVP-HAC)

September 5 Israel
The wave of coronavirus infections is showing signs of slowing down, but the mass gatherings expected during Rosh Hashanah could reverse that trend, say experts. “We are definitely seeing the effects of the booster shot, and the question is which trend will be stronger, the booster or the spread of the virus,” said Dr. Sharon Alroy-Preis, the head of public health services at the Israeli Health Ministry, to Haaretz. “We’re succeeding in slowly but consistently reducing the number of Israelis who are refusing to get vaccinated, which currently stands at 940,000.”
Haaretz

September 8 Israel
Israel’s R number – the average number of people each coronavirus carrier infects – hit a three-month low at 0.95, according to Health Ministry data. The last time the R number dropped below 1 was in early June, before the Delta variant started spreading, leading to Israel’s fourth wave of the coronavirus. It then stood at 0.89, indicating a declining rate of infection.
A decline in the rate of positive tests was also recorded. Out of the approximately 40,000 COVID tests conducted September 8 in Israel, 6.28% returned positive, while 8.4% of about 140,000 tests came back positive last week. Israel recorded 2,473 new cases on the 8th.
New daily infections have been going up over the last few weeks, but the last few days showed a reversal. Currently, 678 coronavirus patients were hospitalized. Out of the new 69 serious patients recorded 7th, 49 had not been vaccinated against the virus and 29 were younger than 60.
Haaretz

Graphics and info from UN and WHO. Active cases of COVID-19 infections continue to rise across the oPt, with the significant majority still occurring in Gaza (60%) where deaths have trebled in one week
A dedicated vaccination drive in the Gaza Strip has seen more vaccine uptake in the last two weeks than in the entire six-month period before that when vaccinations first started
COVAX delivered yet more vaccines to oPt in the month of August: 500,000 Moderna and 100,000 Pfizer, bringing the total number of vaccines in oPt to just under three million.
UN

September 9 Israel
Over a week after Israeli children returned to classes, and as they came back from Rosh Hashanah break, 144,454 Israeli students were currently in quarantine after contracting COVID or being exposed to the disease, the Health Ministry reported. On September 2, prior to Rosh Hashanah and a day after the school year began, that number stood at 97,304.
So far, nearly 2.7 million Israelis have received the COVID vaccine booster shot. Among the 680 critically ill patients, 413 were not vaccinated at all, 179 got two doses and 64 received their third.
Haaretz

The Israeli Health Ministry has released dozens of files containing the data it has shared with the coronavirus vaccine maker Pfizer. The data was given to the Movement for Freedom of Information, which had submitted a request to receive it back in January.
Nevertheless, the parts of the ministry’s agreement with Pfizer that weren’t made public in January were not included in the data. In a cover letter that accompanied the files, the ministry said these sections – which include all the clauses relating to how much Israel paid for the vaccines – must remain confidential. Information released was identical to data previously made public to assess effectiveness of the vaccine, including incidence of the virus, number of serious cases, hospitalizations, people on ventilators, deaths, and vaccination rates, all segmented by various demographic factors like age and gender. The ministry’s relationship with Pfizer is unusually close, and sources in the health system said this relationship isn’t unidirectional because Pizer has also been unofficially sharing data from its clinical trial.
Haaretz

September 9 International
A discussion of vaccine passports: Although travel eligibility has been the primary focus to date, some use of passports to regulate access to social and recreational gatherings, workplaces, or schools appears imminent; Israel’s green passes, for instance, permit entry to otherwise restricted sites such as hotels, gyms, restaurants, theaters, and music venues. The core rationale of these programs is that public health restrictions that limit freedoms and socially valuable activities should be tailored to verifiable risk.
Issue include:

Two features of this landscape are particularly important for evaluating the appropriateness of policy moves: the nature of privileged activities and the identity of the regulator.
New England Journal of Medicine

September 10 Occupied territories
Reuters graphics depict increasing COVID-19 infections in the Palestinian territories, with 2,350 new infections reported on average each day. That’s 93% of the peak – the highest daily average reported on April 8. There have been 396,088 infections and 4,053 coronavirus-related deaths reported since the pandemic began. The territories have administered at least 1,673,806 doses of COVID vaccines so far, about enough to have fully vaccinated 17.9% of the population. During the last week reported, Palestinian territories averaged 35,211 doses each day. At that rate, it will take a further 27 days to administer enough doses for another 10% of the population.
Reuters

Graphics and data from WHO.
WHO

Over the last week, COVID-19 has continued to rip its way across Palestinian cities and towns, with new confirmed cases steadily rising while the number of lab tests remains low, relative to what it was in early spring.
As a result of this depressed testing (due to lack of supply), the data from the Palestinian Ministry of Health isn’t showing a surge like we are seeing in other regions, but a closer look reveals the coronavirus is likely peaking at its highest rate of transmission yet.
Mondoweiss

September 10 Israel
The number of school-age Israeli children and teens in quarantine because they were exposed to a confirmed case of the coronavirus went up 85% to 102,000 since the school year opened, according to data published on the 9th by the Health Ministry. Although the school year officially began 10 days ago, there have only been four or five days of school because of the Rosh Hashanah holiday. “The health and educational systems aren’t synchronized,” said the principal of a Tel Aviv school, as complaints mounted about the Education Ministry’s COVID unit.
Haaretz

The number of serious COVID cases in Israel continued to decline, according to the latest data from the Health Ministry, as did the R number, representing the average number of people each carrier infects. The number of seriously ill patients also dropped to 672, down from 680 on the day before. Of those, 173 are on respirators. The Health Ministry meanwhile registered 7,813 new cases, compared to 3,299 the day before, a relatively low number due to fewer people being tested over the Jewish New Year holiday; 59.48% of the new cases registered on the 9th were vaccinated.
Haaretz

September 11 Occupied territories
Fourteen people have died in Palestine in the last 24 hours of COVID-19 as 1485 new cases were recorded, today said Minister of Health Mai Alkaila.
She said in her daily report on the pandemic in Palestine that nine deaths were confirmed in the Gaza Strip while 1007 new cases were recorded and 900 patients recovered.
The West Bank had five deaths, 478 new cases and 1069 recoveries.
WAFA

September 11 Israel
The number of Israeli coronavirus patients in serious condition has risen slightly to 696, including 186 on ventilators, according to figures released by the Health Ministry on. In total, 9,725 new cases were diagnosed on the 10th.
The number of people who have received a third dose of the coronavirus vaccine has now reached 2.81 million, with over six million people having received at least one dose.
Haaretz