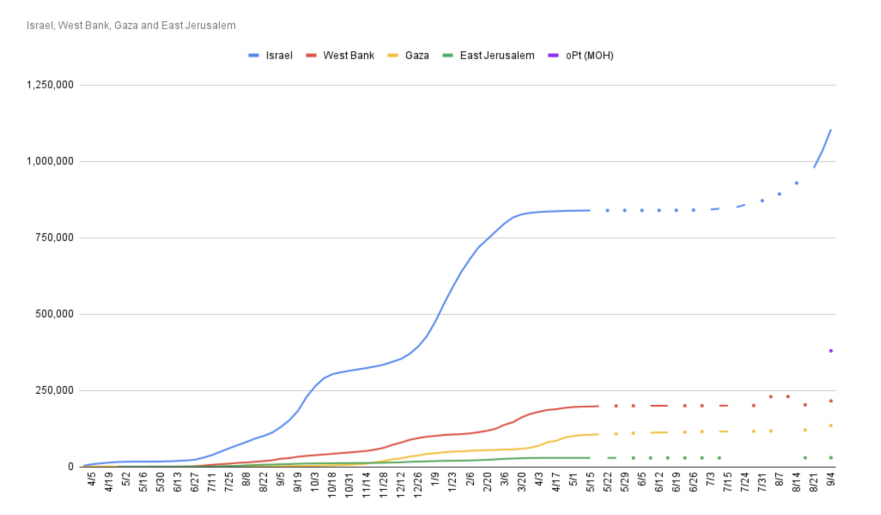 August 29, Occupied territories
The number of new cases of the coronavirus in the West Bank and Gaza jumped significantly over the past week, reaching 868 in the West Bank on September 2 and 1,021 in Gaza on September 3, the highest single-day figures in months. The number of hospitalizations in both territories roughly tripled in the last two weeks. But only 37% of eligible West Bank residents have received at least one dose of vaccine, and about 18% in Gaza, according to health officials in the two territories.
“We’ve got vaccines, but we urgently need people to get vaccinated,” said Shadi al-Liham, the top Health Ministry official in the Bethlehem district of the West Bank. “They are critical to helping us get through the pandemic.” Disinformation and conspiracy theories, along with more well-founded concerns about waning vaccine efficacy, have contributed to widespread hesitancy about getting inoculated, according to Abdulsalam al-Khayyat, director of the public health department at An Najah University’s medical school in Nablus, in the West Bank. “Many people simply are not receiving reliable information about the vaccines,” he said.
This past week, the Palestinian Authority and Hamas both ordered government employees to get vaccinated in an effort to increase compliance.
New York Times

Up to date numbers from the Ministry of Health. Comparing the total of new confirmed cases, there are significant increases.
We For Gaza

August 29 Israel
As Israel prepared to reopen schools, the country’s coronavirus czar, Prof. Salman Zarka, called to limit gatherings to avoid a surge in serious cases. Zarka, speaking on Kan Bet radio, noted that hospitals are being “stretched to their limits,” with 1,175 COVID patients currently hospitalized.
According to data released by the Health Ministry on, August 29, there were currently 726 COVID patients in serious condition – the highest such figure since early March – with 149 on ventilators – the highest number since early April.
Haaretz

Israel expanded its booster shot campaign to everyone aged 12 and up, the Health Ministry announced, after an expert panel attributed Israel’s ability to curb its renewed wave of coronavirus to the booster rollout.
In addition, the Health Ministry announced that those who have received their third shot of the coronavirus vaccine, or who have received their second dose within the past six months, will be exempted from quarantine upon return to Israel from international travel starting this weekend.
Haaretz

August 30 Israel
The coronavirus cabinet approved new restrictions to halt the spread of the Delta variant, including a plan to limit the number of worshipers to 8,000 at the Western Wall for selihot penitential prayers in the run-up to the Jewish New Year next week. Prime Minister Naftali Bennett’s plan calls for selihot worshipers to be divided into pods and to wear masks, including outdoors.
Israel recorded on the 29th its highest positive coronavirus test rate since February. According to data published by the Health Ministry, 7.81% of tests conducted on the 29th returned positive and Israel Identified 6,576 new cases. There are currently 731 patients in serious condition with 160 of them on ventilators.
Haaretz
Haaretz

August 31 Israel
As the Israeli school year was set to open, nearly 115,000 Israelis got their third COVID vaccine shot. The number of new cases approached a record 11,000, but other statistics suggest boosters were having a positive effect. The R number, representing the average number of people a COVID-19 patient will go on to infect, continued its downward trend, reaching 1.09. The rate of positive tests also dipped slightly to 7.65%, compared to 7.8% on the 29th. Twenty-five people died of the illness on the 30th, bringing the total death toll to 7,043.
Haaretz

The government’s response to the COVID-19 pandemic has been ridden with failures, according to a report by the state comptroller.
According to the report issued by State Comptroller Matanyahu Englman, officials acted without authority, and specialized bodies were not established to deal with the pandemic. Additionally, many meetings by the coronavirus cabinet ended without any decisions being made, despite rising infection rates.
Haaretz

Schools across the country were set to reopen September 1, with Israel gambling that its COVID booster campaign will be enough to offset increased infection rates caused by the return of millions of students to classrooms.
Haaretz

September 1 occupied Palestinian territories
Palestine today confirmed 2,675 new Covid-19 cases and eight death cases, according to Health Minister Mai al-Kaileh. She announced that 2,675 Palestinians tested positive for the highly contagious virus and eight others died of it in the occupied territories.
As part of the 2,675 new cases, 1,262 cases were registered in the West Bank and 1,413 others in the Gaza Strip. She pointed that 50 Covid-19 patients are getting treatment in intensive care units and 135 others are currently receiving treatment at hospitals and Covid-19 dispensaries, including eight who are intubated.
She said that the recovery rate in Palestine has so far reached 93% and the active cases account for 6%. The death toll stood at 1% of total infections.
Regarding the Covid-19 vaccination rollout, al-Kaileh said that 991,613 people have received their first jab of the vaccine in the West Bank and the Gaza Strip, including 459,128 people who received the second dose of the vaccine.
WAFA

September 1 Israel
Under a host of regulations dictated by the coronavirus pandemic, about 2.3 million children and 220,000 teaching staff began the new school year as the number of Israeli coronavirus patients in serious condition declined for the third day in a row.
Also, the government approved a proposal to provide grants worth 55 million shekels (about $17 million) to medical workers and health-sector employees who have directly dealt with the pandemic. Each employee is to receive a one-time grant of 1,000 shekels ($312) to spend at cultural institutions or on leisure activities in a bid to also assist businesses in sectors that were closed for a significant period of time because of the pandemic.
Haaretz

September 2 Israel
The 2021-22 school year opened with subdued excitement, under the regime of the rapid coronavirus tests, as the question remained about how classes would affect the spread of the coronavirus. Two opposing processes will determine the Israeli reality in the coming weeks: the return to class, which is expected to lead to a rise in the number of infections, and the campaign to administer a third vaccine, which evidence increasingly suggests is effective.
Haaretz

The number of confirmed COVID cases in Israel’s ultra-Orthodox community has surged over the past few weeks following the reopening of schools and other educational institutions, and are now far exceeding national rates. According to Health Ministry figures obtained by Haaretz, some 20% of all those diagnosed with COVID in Israel on August 31 were ultra-Orthodox; that figure was just 10% three weeks ago, and five percent just one month ago.
Haaretz

People who have received a third COVID booster shot – or those who have recovered from the coronavirus or got their first two doses within six months – will be exempt from quarantine when returning from abroad starting on September 3, the Health Ministry announced. This does not apply, though, to countries with particularly high rates of infection.
Haaretz

Israel reported its highest number of daily COVID infections since the pandemic began, though serious cases continued to tail off amid growing momentum with the rollout of the third vaccine dose. The Health Ministry data revealed that there were 11,187 new infections on September 1, an increase of 1,755 from the previous day. The previous record throughout the pandemic was on August 30, with 11,140.
Haaretz

September 3 Occupied territories
Palestine on September 2 recorded the highest daily deaths and infections from the COVID-19, due to the fast spread of Delta variant in the Palestinian territories.  “The number of infections and deaths is on the rise due to the spread of the new variant of the coronavirus, which is the most prevalent among the youths…there is a noticeable increase in the occupancy of beds in the hospitals.”
Minister of Health, Al-Kaila, warned that the rise of numbers of infections in the West Bank and the Gaza Strip also increased the occupancy of intensive care beds and ventilators, adding that “this means we are in a severe danger.”  She called on the Palestinians to immediately receive the necessary vaccine and abide by all the precautionary measures, mainly social distancing and wearing face masks in all public places.
China.org

September 3 Israel
Israel’s coronavirus czar, Salman Zarka, said September 2, that the start of the school year is a “clear message that we can live with COVID,” and added that health officials have not yet determined how many active coronavirus cases would trigger the closure of schools. He urged those aged 12 and under to take a rapid COVID test before joining family gatherings over the High Holidays and for synagogues to conduct open-air prayers.
Haaretz
Haaretz

September 3 Occupied territories
According to Reuters, during the last week reported Palestinian territories averaged about 21,158 doses of COVID-19 vaccine administered each day. At that rate, it will take a further 45 days to administer enough doses for another 10% of the population.
Reuters