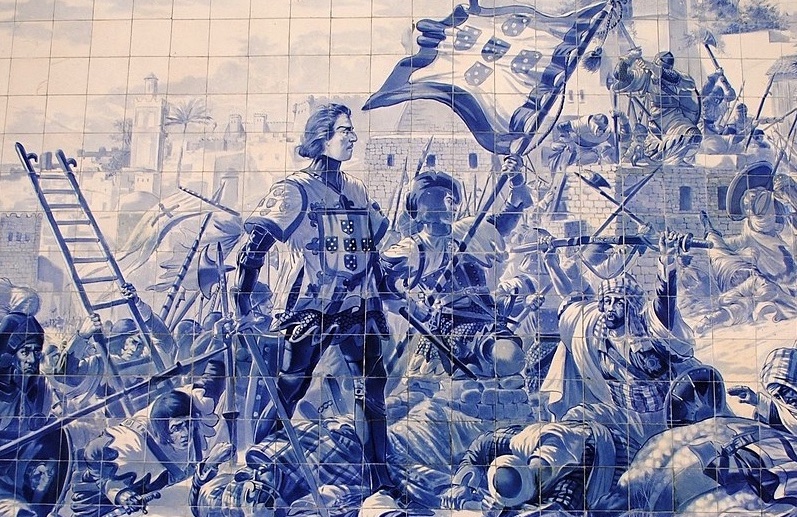 Just World Educational’s Executive President Helena Cobban has been continuing her exploration of the foundations of West Europe’s domination of the world’s trading systems, economies, and political power balance that was previewed earlier on the JWE blog, here.

In the first phase of the project, which she named “Project 500 Years”, she went back to 1520 CE and on January 1 started tracking developments in the building and consolidation of Western Europe’s early maritime empires on a year-by-year basis: one year per day.

However, through that work it became clear to her that she needed to start her exploration not in 1520, and not in 1492, but back in 1415 CE, which was the year in which Portugal’s King John I and his three sons set out from their homeland and captured a city in North Africa called Ceuta. (The banner image above is a tilework representation of Prince Henry, late called “the Navigator”, taking part in the capture of Ceuta.)

After 1415, the Portuguese royals sent out yearly raiding/trading expeditions that crept down the coast of West Africa and succeeded in rounding the “Cape of Good Hope” at Africa’s southern tip in 1488 CE– four years before Columbus’s well-known (and much shorter) first voyage to the Americas.

Now, Ms. Cobban thinks her project should perhaps be named “Project 606 Years”, though she’s currently disinclined to change it.

After completing 175 of the “year-per-day” postings of Phase 1 of the project, over the summer she switched to a new approach, which aims to look more holistically at the foundational decades (and foundational values) of each of the “Big Five” of European imperialisms in the order in which they made their first big moves onto the world scene.

The Big Five are, in order:

On August 30, she published the first of these substantial, per-empire essays, the one on Portugal. You can read it here (or here.) It tracks the history of Portugal’s empire building from 1415 through 1580 CE. 1580 was the year in which a succession struggle in Lisbon led to Spain taking over Portugal and incorporating it into a Spanish-led “Iberian Union” (which lasted only 60 years.) But still, 1580 served as a useful point at which Ms. Cobban could pause and review the first 165 years of Portugal’s truly path-breaking pursuit of a world empire.

You can see her summarization of what Portugal’s empire-builders had “achieved” during those 165 years, copied from that essay, if you scroll down lower, here.

In this essay, Ms. Cobban also notes that from 1405 through 1433 CE, China’s Ming-dynasty admiral Zheng He had led seven–always peaceful–naval expeditions featuring massive vessels called “star rafts”all round the Indian Ocean, including to East Africa. But in 1433 the Ming Emperor decided to focus more on challenges from land-based invaders to the north, and h dismantled his entire blue-seas navy. She concludes her essay thus:

In 1498, when [Portuguse expedition head Vasco] Da Gama arrived in the Indian Ocean in his very much smaller vessels, he met no Chinese star rafts. It is interesting to speculate on how global history might have been different if he had.

On September 6, Ms. Cobban wrote a short supplementary blog-post, “More on Portugal’s use of exemplary terror”, which you can read here, or here.

Then more recently, she published a piece titled “Language, empire, nation, state” that was intended as a bridge between her study of Portugal and of Spain. This piece, which you can read here or here, looks at the emergence and codification of “national” languages in those two polities, and shows how closely the codification of those two (very similar, and both post-Latin) languages was tied to the development by the two monarchies of their respective imperial projects.

Along the way, she takes something of a sideswipe at the theory regarding the centrality of “print capitalism” propounded by the influential theorist of nationalisms, Benedict Anderson.

Anyway, interested readers are warmly invited to explore these and all the other materials on the Medium-based “publication” in which Ms. Cobban is compiling her work on this project.

And here is Ms. Cobban’s summarization of the “achievements” of Portugal’s empire-builders during the first 165 years of their endeavor: