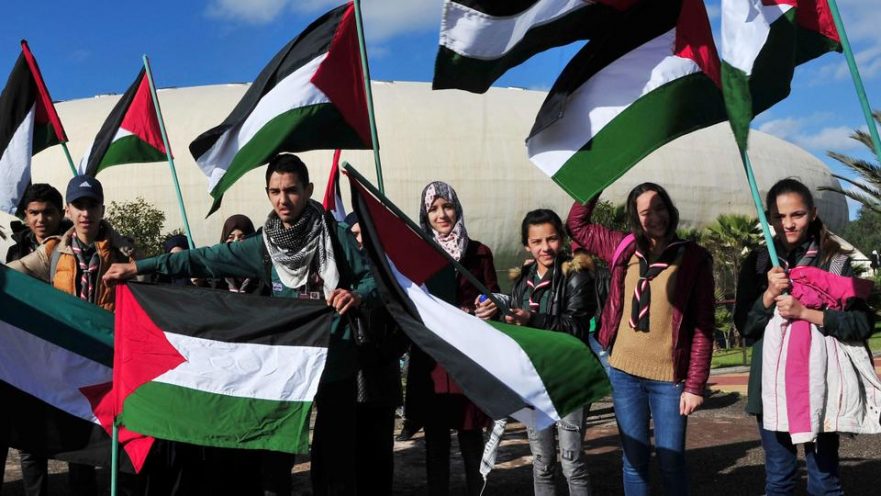 Settler-colonialism is violent in nature and is built on the negation of natives’ basic rights and their very existence. Algeria under French rule and Palestine under Israeli rule are no exception to such colonial violence. In an attempt to push them to surrender to the will of their colonial masters, the use of excessive and brutal violence against settler-colonized people in both countries has been well documented. But history has proven that this tactic does not work, and it backfires at a high human cost.

On May 8, 1945, France killed 45,000 Algerians who took to the streets to demand independence from France following the victory of the Allied Forces over Nazi Germany. Today, the world is watching the ongoing violent displacement of Palestinians in Jerusalem and elsewhere in silence, without doing more than condemning it.

The proven violent nature of settler-colonialism often produces violent reactions from the colonized people. This is true about the National Liberation Front (NLF) in Algeria, and all Palestinian factions and groups such as Fatah, Hamas, and the PFLP. The NLF in Algeria engaged in a campaign of revolutionary violence that was extraordinary in nature and included, among many other methods of torture, cutting the throats of French soldiers captured by the group “like sheep.” The same applies to the Palestinians who have used various violent means including bombings and kidnappings.

In the cases of both Palestine and Algeria, the state violence against colonized people has excessively surpassed the violence used by non-state Algerian and Palestinian actors. To give an example, France’s use of violence against Algerians was remarkably brutal with hundreds of NLF members being killed under torture – in some cases, they were thrown from high places and announced to have committed suicide. In its most recent confrontation with the Palestinians in May 2021, Israel killed more than 250 Palestinians in 11 days compared to 13 Israelis killed by Palestinian fire.

The use of violence by non-state actors in Algeria and Palestine does not negate their attempts to end colonial rule by dialogue. The NLF was ready to engage in dialogue with the French authorities, but France, which called Algeria “French Algeria,” refused any form of dialogue with the NLF. Although many Palestinian factions consider armed resistance central to their struggle with Israel, factions such as Fatah and Hamas have in many instances engaged in non-violent resistance against Israel, which was also met with violence.

This is also true for the protests of the first Palestinian Intifada, which started as non-violent and turned violent as Israel used excessive force against protesters, including breaking their bones. The Great March of Return in the Gaza Strip is another example of how Israel responded to Palestinian engagement in non-violent resistance, with Israeli snipers killing 214 Palestinian, and injuring 36,000 others, while many were intentionally shot in the knee to be maimed. Just like in Palestine, in Algeria, France responded with full force to Algerian non-violent actions, including the 1956 strike, as it viewed any Algerian action against its rule an issue of law and order, negating Algerians’ desire for independence.

As far as violence is concerned, state violence is less debated and discussed in so far as global politics, and international relations and interests govern this process, including the perception of violence. Not only on a state level, such as the case of France in Algeria and of Israel in Palestine, but settler groups have also formed armed groups that have carried out violent acts that resulted in the killing of innocent people in both Palestine and Algeria.

This includes attacks carried out by the Secret Army Organization in Algeria and the price-tag Israeli settler groups, which are accused of burning Palestinian groves, mosques, and houses. Their attacks have claimed the lives of Palestinian teenager Muhammad Abu-Khudair in Jerusalem and the Dawabshe family in Duma, who were all burned to death in 2015.

The refusal of state actors to use violence can’t win moral ground as long as it permits the use of violence against colonized people. Israel’s creation was accompanied by a surge of violence not just against the Palestinians, who were made refugees, but also against the colonial British forces in Palestine.

In addition to dozens of documented massacres against Palestinians, Zionist militias have used car bombings and assassinations both against Palestinian and British targets, forcing some 750,000 Palestinians out of their towns and villages. The same applies to France, which today glorifies the French (violent) resistance to the Nazi occupation of France during World War II. Glorifying the use of arms by states and denying its use by the very people they occupy deprives these states, namely France and Israel, of the moral high ground.

Today, the use of violence is condemned by most world governments, and non-state actors engaged in violence are often isolated and placed under pressure. The anti-colonial movement of the 1950s and 1960s no longer exists. Today, the challenge for the Palestinians is to be committed to their rights and exert all needed efforts to obtain these rights without being internationally isolated because of their use of violence.

Committing to non-violence as a strategy is one way to achieve this and it proved effective during the Civil Rights Movement in the U.S. and the Salt March in India staged by Mahatma Gandhi. However, whether this will be the case in Palestine is debatable. So far, the use of violence and non-violence alike have not led to their liberation.

The morality of the use of violence in (settler-) colonial contexts should not be questioned in isolation from the state violence used against the colonized people. Settler-colonialism is violent in nature – including that of France and Israel – in the same way the response to it is also violent. Violence creates a vicious cycle and the way to end it passes through ending colonial violence, which creates this cycle in the first place by denying people their national and political rights.