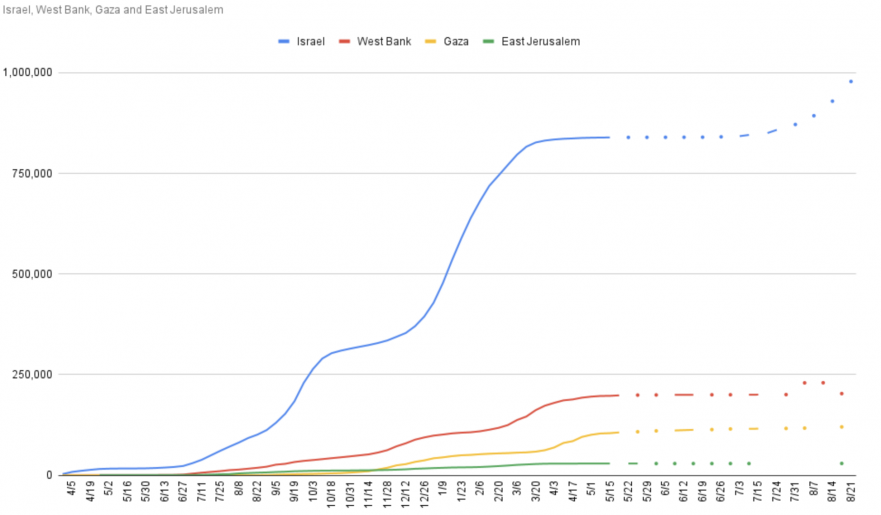 August 15 Israel
The Israeli Health Ministry director-general said he expects Israel’s pioneering COVID booster shot campaign to stop a rise in serious cases, which have been steadily going up since late July amid the spread of the Delta variant, raising concerns the health system may be nearing full capacity.
Meanwhile, according to Health Ministry figures, there are currently 524 patients in serious condition, the highest figure since mid-March. A vast majority, the data shows, are not fully vaccinated. The rate of positive tests is now 5.38%, also the highest figure reported since late February. There are currently 49,608 confirmed active cases in Israel, 4,145 of them reported on August 14.
Haaretz

Following a successful test in Tel Aviv, Israel is set to expand its night vaccination campaign to cities across the country as part of Prime Minister Naftali Bennett’s effort to prevent another national lockdown and curb rising morbidity.
Hundreds of people, ranging in age from 12 to 90, were vaccinated in Dizengoff Square in central Tel Aviv, following the end of Shabbat as part of a joint initiative between the municipality and Magen David Adom emergency service.
Haaretz

Israeli Health Ministry data shows that the number of Covid patients in serious condition rose to 525, of whom 122 are in critical condition and 91 are on ventilators. The number of serious cases has been rising steadily over the past few weeks, and their number today is the highest since March 29.
The Health Ministry announced new COVID-19 regulations that will gradually go into effect over the coming week as Israel struggles to curb the virus. New restrictions at Ben-Gurion Airport will take effect starting August 16. Arrivals from only 10 countries will be exempt from quarantine.
Haaretz

August 16 Israel
As Israel ignores WHO’s plea to stop booster shots, some Israeli experts side with the World Health Organization and claim the current policy is both morally and epidemiologically wrong. The main issues discussed in Israel revolved around the booster shot’s safety and efficacy. One WHO official stressed that the question isn’t only a moral one, because vaccinating the rest of the world also contributes to Israelis’ safety.
Haaretz
Haaretz

August 18 Occupied territories
The West Bank recorded 349 new COVID-19 cases and 68 recoveries in the last 24 hours while the Gaza Strip recorded 404 new cases, two deaths, and 50 recoveries, today said Minister of Health. She said in her daily report on COVID-19 pandemic in Palestine that the number of people getting treatment for the disease in hospitals has jumped to 61 and 22 are in intensive care, while three patients are on ventilators.
Alkaila said that while 543,802 people have been vaccinated against coronavirus in the West Bank, only 124,092 people were vaccinated in the Gaza Strip. [NB vaccination rate approx. 6%] Health officials warned today of a possible surge in new coronavirus cases as a result of the Delta variant.
WAFA

The Palestinian Health Ministry warned that the epidemiological situation in Palestine was worsening, amid fears of a 4th wave of COVID-19 pandemic. The official said the ministry has made the necessary preparations to deal with a surge in virus infections, going on to call on the Palestinians to get vaccinated against COVID-19. Palestinian health authorities registered 895 new infections in the West Bank and Gaza Strip in the last 24 hours.
AA

August 18 Israel
The third shot of the coronavirus vaccine is 86% effective in preventing COVID-19 infection among people 60 and older, one of Israel’s leading health care providers announced. A study by the Maccabi health maintenance organization, the first of its kind in the world, surveyed 149,144 people who received the booster shot and a control group of 675,630 people received the second shot in January or February. Of the former, only 37 tested positive, compared with 1,064 of the latter. The first group was surveyed a week after receiving the third dose.
Haaretz

New COVID-19 related restrictions came into with all children over the age of three being required to show proof of vaccination or a negative COVID test result before entering indoor spaces, except for malls and stores. In addition, stores and malls will be required to limit capacity to one person per seven square meters. Additionally, a limit will be set on crowd sizes at large events.
Haaretz

The rate of new coronavirus cases in Israel after the arrival of the Delta variant was lower in the ultra-Orthodox community than in the general public – until the Haredi schools reopened earlier this month, Health Ministry data shows. The Delta variant was first detected in Israel in early July. Before its arrival, the daily number of new cases in the general public had fallen to single digits, even zero on some days. But after the highly contagious new strain arrived, new cases began to rise again in late July.
Haaretz

Director General of Israel’s Health Ministry Nachman Ash signed a directive that will allow schools to administer vaccinations during school hours, circumventing Education Minister Yifat Shasha-Biton who had previously voiced concern over in-school vaccinations. The directive is based on the Public Health Ordinance from the British Mandate period, whose Clause 20 authorizes the health minister to declare an infectious disease a threat to public health, thus giving the government broad powers to combat it.
Haaretz

Groups of vaccine opponents have begun organizing to set up private schools and home study groups in a number of locations in Israel to evade the regulations intended to impede the spread of COVID-19, including virus testing, quarantines, and masks inside schools. Thousands of vaccine opponents have also declared that they will not send their children to school on September 1, in protest over the restrictions.
Haaretz

With infections and serious cases still on the rise, Israel is in a rather unique moment of epidemiological doubt. The prime minister is gambling his political future on the third vaccine shot being able to avert another lockdown.
Haaretz

The pandemic has pushed local Israeli family doctors, who treat 98% of coronavirus patients, to the brink of crisis.  Calls from patients, some stemming from simple anxiety, have soared. Patient violence, mainly but not exclusively verbal, has also risen. In addition, doctors fear catching the virus themselves.
Haaretz

Scientists are still assessing how Israel’s pandemic response plunged from shining example to cautionary tale, and the stunning reversal has provided a crucial test for Israel’s new prime minister, Naftali Bennett, who staked a claim for leadership partly on the strength of his manifesto, “How to Beat a Pandemic.” But some experts fear that Israel’s high rate of infections among early vaccine recipients may indicate a waning of the vaccine’s protections over time, a finding that contributed to a U.S. decision to begin offering booster shots to Americans starting next month.
New York Times

Adalah published “The Israeli Supreme Court and the COVID-19 Emergency,” a comprehensive report that analyzes Court decisions in 88 cases brought during the first wave of the crisis. The report provides essential background and analysis for lawyers, jurists, and decision-makers working globally. The report is especially timely given the current resurgence of the virus and possible reinstitution by governments of myriad restrictions on our daily lives and freedoms.
Adalah

August 19 Occupied territories & Israel
In Israel, all children over the age of three will now be required either to provide proof of a double Covid-19 vaccination or a daily negative test in order to enter the majority of public venues, according to new government regulations. The expansion of the “Green Pass” regulations in Israel caused anger and confusion as they were rapidly introduced with little information effectively distributed on what the new rules would be. In recent weeks, the state has begun administering booster shots to Israelis aged 50 and over, while urging the vaccination of children as young as 12.
About one million Israelis have not been vaccinated, even though they are eligible. Prime Minister Naftali Bennett has warned that if inoculation numbers don’t increase, Israel could be facing another lockdown during the High Holiday season, which begins with New Year celebrations on 6 September.
Cases are also rising among Palestinians in the occupied West Bank and the Israeli-blockaded Gaza Strip. Official figures show that infection rates have risen seven-fold since 1 August, with several hundred cases a day reported in recent days, after weeks of two-digit tallies.
Middle East Eye

August 19 Israel
Israel’s Health Ministry worked up to the last minute to arrange the rapid COVID testing required for children between 3 and 11 to enter public venues, but in the end, there were long waits and no clear information.
Haaretz

Israel’s top coronavirus expert says infection rates among Israelis 60 and over are “slowing down,” as a renewed COVID outbreak has triggered soaring infection rates. “In fact, over the past two days we see a curb in the number of new cases in 60-year-olds and over, who are mostly inoculated with a third dose,” Prof. Ran Balicer told Ynet news site. “We can say that today booster shots for 60-year-olds and now even people over 50 are doing their job in the sense that they reduce infection rates.”
Prime Minister Bennett also said that he issued an order for hundreds more vaccination complexes to be opened and noted he anticipates that in the future everyone will be eligible to receive the third booster shot.
Haaretz

Israel’s vaccination committee recommended the administration of the third COVID booster shot to Israelis aged 40 and up, lowering it from the current 50, as a renewed COVID outbreak has triggered soaring infection rates. The Health Ministry is expected to accept the recommendation, but no schedule for expanding the vaccination drive has been announced yet.
Haaretz

August 21 Occupied territories
Nablus Governor Ibrahim Ramadan warned today that the number of daily coronavirus cases is rising significantly and hospital occupancy is also worryingly increasing, pointing to the fact that most of those infected with the disease have not been inoculated against the COVID-19 disease. The Palestinian Health Ministry has warned of a surge in coronavirus cases in Palestine in recent days as a result of the Delta variant of COVID-19 as the number of new cases and hospitalized patients have multiplied while only 33% of people in the West Bank have been vaccinated compared to only 10% in the Gaza Strip.
WAFA

August 21 Israel
Israel logged 645 COVID patients in serious condition, with 155 in critical condition according to health ministry data released on Saturday night. 7,761 new COVID cases were recorded on Friday, according to the data. Over the weekend, tens of thousands of Israelis aged 40 to 49 received their third coronavirus vaccine, with the total number of Israelis who have received their third shot reaching 1.3 million.
Haaretz