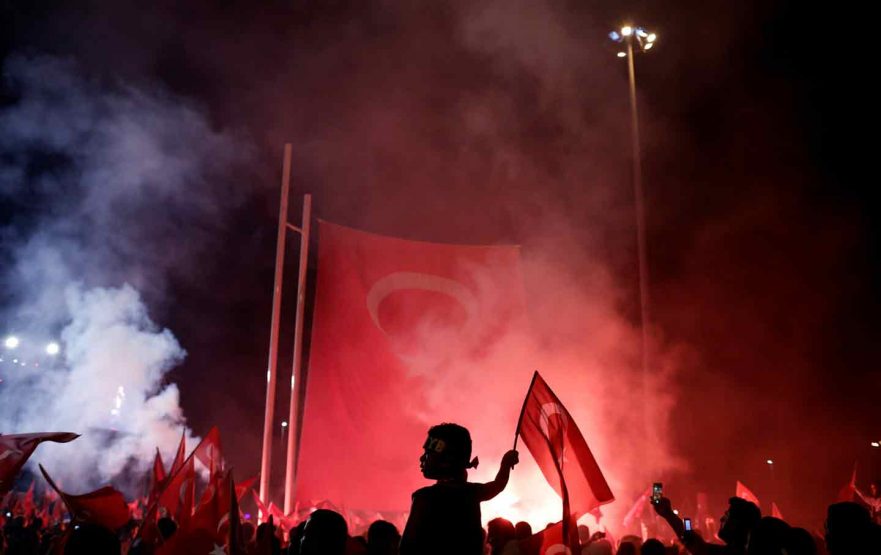 We are delighted to crosspost this interview from Global Justice in the 21st Century, the blog of JWE Board Member Richard Falk.

The following is a modified text of Richard Falk’s responses to the interview questions of Murat Sofuoglu, a Turkish Journalist associated with TRT World, “On the July 15th Coup Attempt Five Years Later” (July 8, 2021):

Five years ago my Turkish wife and I were strolling in the Karakoy neighborhood of Istanbul amid the crowded cafes on a typical summer night. It was our only day in Istanbul during the entire summer, occasioned by a conference at Koç University scheduled for the next day devoted to refugee policy with special attention to problems of massive human displacement caused by the regional conflicts, particularly Syria and Iraq. We stopped for dinner at a Greek restaurant, encountering unexpectedly Turkish friends who asked to join us. As the meal neared its end, the manager came to our table, speaking in almost a whisper he said that the Bosphorus Bridge, subsequently renamed 15th of July Martyr’s Bridge, was occupied by troops and the scene of violence, and that it seemed a coup was underway. It was a bit eerie as the atmosphere in the restaurant was vibrant and utterly without any sense that a national crisis was in the process of erupting. We paid our bill, and walked slowly back to a nearby hotel where we were staying for the night. Soon jets were flying low over this part of the city fast enough to cause the terrifying explosive sound of sonic booms, obviously with the intention of causing panic on the ground. We cautiously looked out of our hotel window to see police cars blocking the street below. For the rest of the night we were glued to the TV coverage of the rapidly unfolding events climaxed by Recep Tayyip Erdoğan’s dramatic appearance at the Istanbul Airport, greeted by a supportive crowd that walked the streets to greet the President and reaffirm their loyalty to the elected legitimate government. This reassurance by the people of Turkey and all of the political parties that made clear their rejection of the coup attempt contrasted with the silence of NATO governments, the longtime allies of the Ankara government. An impression was created among close observers of the political scene that leading Western governments would have greeted a successful coup with open arms. This impression was undoubtedly shared by leadership circles in Turkey, and has had profound effects on Turkish foreign policy, and particularly with the United States. These effects were initially associated with the Obama and Trump presidencies, but have continued in the early months of the Biden presidency.

1. How has the July 15 coup attempt affected Turkey’s foreign policy?

I believe the principal impact of the failed coup five years ago on Turkish foreign policy has been to cast lingering doubts on the loyalty of Turkey’s NATO partners. There was not only a display on the fateful night of July 15th of ‘wait and see’ attitudes in the principal capitals of Western Europe and of Washington as the coup unfolded, but there was no show of support for the legitimate elected government of Turkey from its longtime, and supposedly closest, allies. This Western diplomacy sent a message to Ankara that for the sake of its future security the government would be well advised to proceed rapidly to diversify its relations with other countries, and in particular, seek to deepen friendly relations with important other countries, including Russia and China.

These impressions were reinforced by the refusal by Washington to give serious consideration to the extradition request of the Turkish Government after the coup to enable the criminal prosecution of Fetullah Gulen, the presumed leader of FETO, the presumed forces behind the coup. Furthermore, in the period after the coup the various anti-Turkish international actors that were situated in various countries, including FETO, Kurdish groups aligned with the PKK, hard-core Kemalists living in the West, and Israel mounted an anti-Turkish international campaign alleging that Turkey was an unreliable ally, and was guilty of undermining Western policy with regard to Iran and the Kurdish presence in the Syrian civil strife.

A final factor for some was a clear indications that the coup attempt had been given a green light to proceed by Washington even if it not receive active, material support. There were several independent reports of CIA involvement and collaboration with FETO, and although never definitively confirmed, it naturally contributed to Turkish attitudes of wariness and some distrust with respect to ongoing relations with the United States, which had already been strained by a vigorous anti-Turkish international campaign.

2. Did the coup attempt make negative effects on US-Turkey relations? If so, how?

My response to the prior question supplies part of the answer. Turkey acted in a manner that stressed its political independence, especially on matters of national security and in relation to regional issues. It made no secret of its support for the Palestinian struggle for basic rights including the right of self-determination and its consistent opposition to Israeli longtime policies and practices. As well, Turkey purchased a defensive missile system—S-400—from Russia, which angered Washington, and was treated as a threat to NATO coherence and a breach of an unwritten NATO code of conduct. .

To an extent difficult to measure the coup attempt intensified preexisting trends in both Ankara and Washington. It has led to a downward trajectory in relations between the two countries. Ever since the AKP was elected to govern in 2002, its leadership made clear that Turkey was no longer a passive ally within the NATO framework as it had been throughout the Cold War. Already in 2003. the Turkish Parliament turned down the U.S. request to invade Iraq from Turkish territory, and in 2010 Turkey, together with Brazil, made efforts to negotiate an agreement on Iran’s Nuclear Program, which although earlier encouraged by the U.S., created tensions with the U.S. when Iran turned out to be receptive to such an initiative with its promise of reduced regional tensions. The coup attempt in 2016 hardened Turkish perceptions that hostile forces were receiving help from governments supposedly friendly with Turkey. In the background was a steady drum-beat of anti-Turkish propaganda on right-wing Western websites such as the Gatestone Institute and Middle East Watch, which are geopolitical propagandists for post-colonial U.S. imperialism, which include unabashed support for Israeli expansionism and denigration of legitimate Palestinian aspirations for an end to apartheid and the attainment of self-determination in their own country.

3. Will the coup attempt’s effects on the Turkish foreign policy have a lasting legacy?

This is hard to predict. It depends, in part, on whether Turkish/Israel relations remain strained, and possible leadership shifts in both countries. If normal diplomatic relations with Israel are restored, a process now mutually pursued, then I would suspect that leading Western governments will not back away from their anti-Turkish policies without offering an explanation. The American president Biden, together with the UK, France, and Germany, seem eager to focus their foreign policy in relation to meeting the multiple challenges posed by China’s rise, and secondarily by Russian territorial ambitions on its borders, and want as few secondary distractions in other regions as possible.

At the same time Turkey is likely for the foreseeable future to continue to hedge its policies, as well as seize its opportunities, by further developing a wide range of positive contacts within the Middle East and beyond, and this seems prudent even if Washington/Tel Aviv back off. Because Turkey is polarized in relation to the governing AKP, which has now held the reins of power since 2002, the originality of the Turkish reality is rarely comprehended as perceptions oscillate between embittered critics of the government and its leadership and its base of ardent supporters.