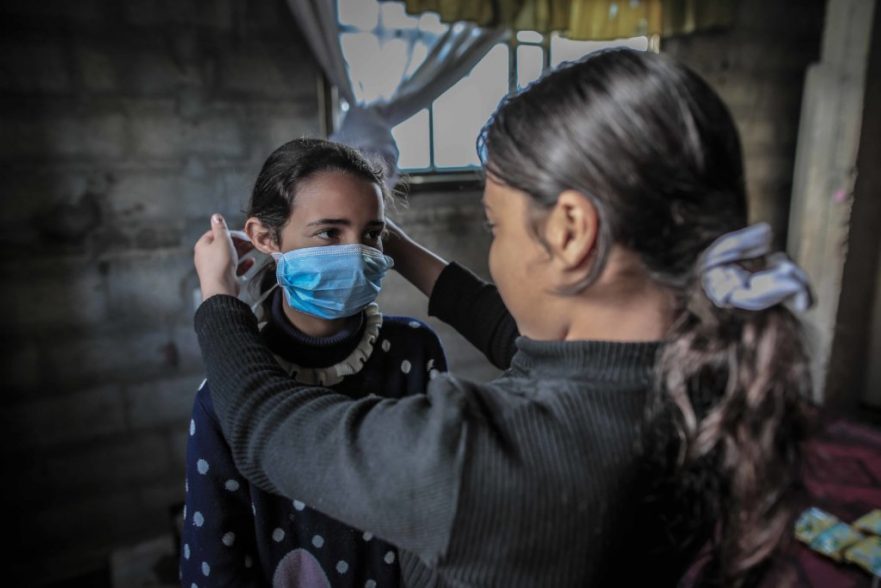 As of July 10 the numbers of Coronavirus cases:
Israel 845,379
West Bank 228,792 (includes 28,841 in East Jerusalem* unchanged since 4/24)
*One theory: because of the high vaccination rate in Israel, (before the Delta variant), most clinics are not testing for Covid and East Jerusalemites have access to sick funds which are not doing a lot of testing – it is still unclear if East Jerusalem is being counted by Israel AND again by the Palestinian Ministry of Health and or WHO…still trying to figure that out)
Gaza 115,156

July 11 Israel
Israel recorded a slight downward trend in the number of new daily confirmed coronavirus cases over the weekend, according to the Health Ministry. Also on the 11th, Health Minister Nitzan Horowitz said that effective immediately, adults with impaired immune systems who had received two doses of the Pfizer vaccine could get a booster. On the 12th, the panel of coronavirus experts advising the Health Ministry is examining the possibility of beginning to vaccinate children under the age of 12 with preexisting medical conditions, or children living in a household where at least one person is at increased risk of serious illness.
Haaretz
Haaretz

Israel reached an agreement with Pfizer on the 10th to expedite the company’s next shipment of COVID-19 vaccines, which will be delivered on August 1, Prime Minister Naftali Bennett told a cabinet meeting. The new deliveries will be used as second injections for those who already received their first shot, allowing for vaccine administration in a continuous fashion.
Haaretz

July 12 Israel
New measures installed at Israel’s Ben-Gurion International Airport aim to bolster protection against the coronavirus for incoming travelers, Israeli Health Minister Nitzan Horowitz said. Authorities also announced closing the loophole which allowed Israelis to fly to countries with a dangerously high coronavirus infection rate, though Israelis are technically forbidden to enter them. “Fines will be issued to anyone who enters these countries, and inspectors will be enforcing this,” Horowitz said.
Haaretz

Israel’s coronavirus czar Nachman Ash admitted that the number of confirmed coronavirus cases released by the Health Ministry in recent weeks was false, adding that the number of negative COVID-19 tests conducted at Ben-Gurion Airport had been mistakenly counted twice. Ash said that the Health Ministry intends to correct the data in the upcoming weeks, and stressed that “The rate of positive COVID tests isn’t surging, there’s a gradual increase in recent days.”
Haaretz

The number of homeless people in Israel receiving help from the government rose by 27% in 2020 as the coronavirus caused a rise in joblessness and economic distress, data from Israel’s Labor, Social Affairs and Social Services Ministry reveal. According to the report, 450 of the 733 new homeless cases reported last year are receiving support from the Social Services Ministry, with 283 others receiving aid by other government departments.
Haaretz

Israel is partnering with U.S.-based NRx Pharmaceuticals to complete trials and commercialize the Israeli-developed COVID-19 vaccine BriLife. NRx and the Israel Institute for Biological Research announced a memorandum of understanding that includes the worldwide development, manufacturing, and marketing rights of the vaccine, which in recent months has been undergoing early clinical trials in Israel. The vaccine was developed by the Israel Institute for Biological Research, which is overseen by the Defense Ministry.
Haaretz

July 15 West Bank
Palestinians are suffering through severe water shortages in the searing summer, while illegal Israeli settlers nearby enjoy unlimited quantities not only for drinking but to fill swimming pools, irrigate crops, and wash their vehicles. The Israeli authorities refuse to grant the necessary licenses to the Palestinian water authorities to operate freely in the areas classified as C and under complete Israeli security and administrative control; Israel controls 85% of the water resources, impacting the greater need during the pandemic for hygiene and sterilization.
Aljazeera

July 15 Occupied territories & Israel
The rights of Palestinian workers in Israel and illegal Israeli settlements in the West Bank have been the subject of increasing violations since the outbreak of the COVID-19 pandemic. On  March 17, 2020, former Israeli Security Minister Naftali Bennett announced a series of special provisions to regulate the labor and accommodations of Palestinian workers from the West Bank in an effort to curb rising COVID-19 cases among the Israeli population. While the provisions have allowed those with work permits and those under the age of 50 to enter and exit Israeli territories, they require that workers coordinate their work and accommodation with their Israeli employers, and prohibit them from returning to the West Bank during the period of their work contracts
This policy brief highlights the Israeli regime’s violations of Palestinian workers’ rights in Israel and the settlements prior to and throughout the COVID-19 pandemic, arguing that these violations have become more pronounced since the outbreak. It concludes with recommendations to protect Palestinian workers.
Al-Shabaka

July 15 Israel
Israel recorded yet another four-month high in daily coronavirus infections, with 765 new confirmed COVID-19 cases, Health Ministry data shows, as the Delta variant continues to spread across the country. The number of serious cases slightly increased in Israel, but still remained low and currently stands at 54, of whom 17 are in critical condition and 16 on ventilators. Israel has 5,372 active cases and 6,443 people have died from the virus so far.
Speaking in a press conference, Prime Minister Naftali Bennettsaid that Israel can beat the Delta variant within five weeks without mass lockdowns.
Haaretz

The Israeli government announced July 15 a proposal that would let Israelis who have been vaccinated against COVID-19, have recovered, or have received a recent negative test result attend large indoor events. The plan, which still requires approval by the ministerial committee on the coronavirus crisis, would go into effect the 21st.
Haaretz

July 16 Gaza
This week journalist Ahmed Al-Sammak reported from Gaza how patients with COVID-19 were sent home from the hospital in May, during the most severe military escalation with Israel in years. He spoke to one couple who contracted symptoms in the middle of Israel’s assault, and navigated airstrikes and blown out highways to get to the ER.
Once at the hospital, Imad Alhour and Imran Namroti were first told they weren’t sick enough to get a COVID-19 test. Al-Sammak reports: “He refused to take any swabs from me and my wife and told us that they had only done this for extremely serious cases,” Alhour said. “I called my friend who works in the hospital and he helped us and took swabs.” Although the results were positive, after six hours the couple was released and sent home. The hospital was overwhelmed with injuries and critical COVID-19 patients and did not have the capacity to treat them.
Mondoweiss

“The war badly affected the situation of the pandemic in Gaza,” said Dr. Majdy Dahir, the director of the preventive medicine department at the ministry of health in Gaza. His agency’s headquarters were hit in an airstrike and the debris from the impact caused severe damage to the main COVID-19 laboratory in the next building over, shutting it down for nine days. There are only two labs in Gaza that process PCR tests. Rapid tests are run out of four governmental satellite locations and 22 UNRWA health centers.
Mondoweiss

July 16 Israel
Israel recorded yet another four-month high in daily coronavirus infections, with 855 new confirmed COVID-19 cases on the 15th, but Health Ministry data shows that serious cases have begun stabilizing over recent days. Although the Delta variant continues to make headway, the number of serious cases has slightly declined and currently stands at 52, of whom 18 are in critical condition and 17 on ventilators.
Prime Minster Naftali Bennett’s Office announced on the 16th morning that it will convene an inter-ministerial meeting, as Delta variant spreads across the world. Officials from the Health, Defense, Interior, Finance and Transportation Ministries will participate in the meeting.
Haaretz