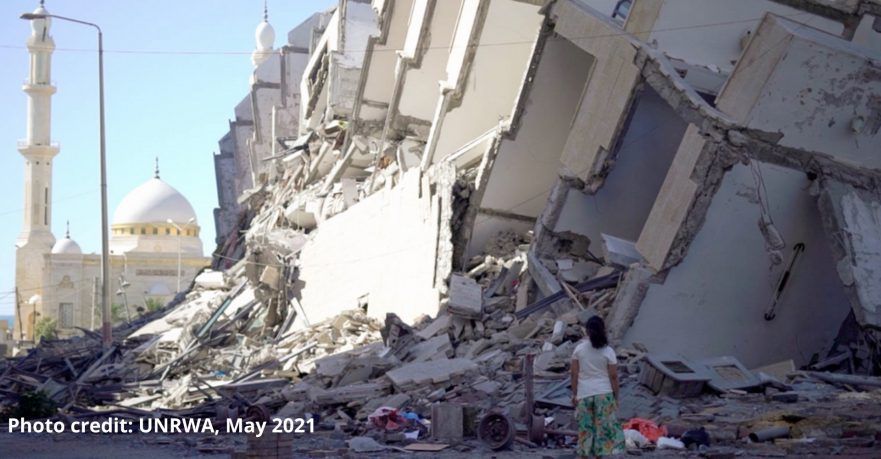 Laila El-Haddad is a Palestinian-American author and journalist from Gaza City. She currently lives in Clarksville, MD with her family. The Third Edition of the acclaimed cookbook she co-authored, The Gaza Kitchen: A Palestinian Culinary Journey, will be released June 15.

On Thursday, May 13, my children and I woke up bright and early after a marathon kaak baking session the day before in anticipation of Eid al-Fitr, the Islamic holiday that marks the end of holiest month in the Muslim calendar, Ramadan.  We gathered with hundreds of other families, and later, met my siblings and cousins for a muted celebration. Across the Atlantic, in my parent’s birthplace and my hometown of Gaza City, my uncle and millions of other Palestinians like him woke up to a very different reality.

There was no annual Eid prayer for them, no going out to celebrate.  Instead, my uncle told me, he huddled together with 12 members of his family in one room under the cover of darkness.  His voice over What’s App was drowned out by a haunting and horrifying cacophony of Israeli explosions that ultimately leveled multi-story buildings like Keva blocks, eviscerating entire families in one fell swoop (including the Abu Hatab family and their 8 children), and ripping apart city streets.

“This is not bombing, this is not self-defense this is sheer insanity” my uncle, Omar H., declared.  Yet, he tried to reassure us they were safe, even though for him and for millions of other Palestinian in the Gaza Strip there is no place to seek refuge and no “Iron Dome” to protect them.

Over the preceding days, the East Jerusalem Palestinian neighborhood of Sheikh Jarrah became a flashpoint of Palestinian struggle after dozens of families there were threatened with forced removal by Israel from the place they’ve called home for decades. This was part of a long-continuing pattern of Israeli dispossession of Palestinians, seizure of their land, and brutal breaking up of Palestinian communities. Palestinians in Gaza and elsewhere were outraged at Israel’s violence in Sheikh Jarrah and its brutal assault on worshippers in Jerusalem’s Al Aqsa Mosque, the third holiest site in Islam– during Ramadan no less. That outrage sparked the conflagration in Gaza.

Like Sheikh Jarrah, Gaza has been a place of refuge for Palestinians displaced 73 years ago, when they were ethnically cleansed from their towns and villages by invading Zionist militias during Israel’s establishment in what we call the Nakba (“Catastrophe”). Those refugees have been prevented from returning to their homes and properties ever since. In Gaza, refugees from 1948 make up three-fourths of the current population of 2.1 million.

Israel’s wildly disproportionate attacks against Gaza are neither new nor are they, as the mainstream media would have us believe, in any shape, fashion or form an act of self-defense.  There is nothing “defensive” about killing innocent children, leveling media buildings, destroying farmland, and depriving millions of their basic freedoms to fish, farm, learn, travel, live, and create.

In fact, Israeli decision-makers have their own cruel and dehumanizing name for these actions: “mowing the lawn”. Last week, the rightwing Israeli pundit David Weinberg told the Jerusalem Post that, “If you fail to do so, weeds grow wild and snakes begin to slither around in the brush.” Palestinian lives, according to this perverse logic, are expendable, and episodic attacks against Gaza inevitable.

In reality, these attacks are the violent, wanton, and willful destruction of a people and its homes, farms and institutions led by a desperate far-right politician, shamefully supported by our tax dollars, using many U.S. military technologies, and greenlighted by the Biden administration. Israel is pummeling an already besieged, stateless population in a sealed-off zone roughly twice the size of Washington DC.

Gaza is the birthplace of my parents, and the city in which I would spend my summers as a child, the place where I raised my firstborn as a new mother and worked as a journalist, until 2007. I returned multiple times since, whilst conducting research for The Gaza Kitchen, while filming an episode of Parts Unknown with the late Anthony Bourdain, and as a consultant with the World Food Programme just over a year ago.  The realities and changes I saw as a direct result of deliberate Israeli policies over the preceding 12 years were stark: stunted growth in children, skyrocketing rates of iron deficiency anemia, widespread unemployment and trauma, but most importantly, a never-ending assault on people’s humanity, dignity, and freedoms.

In 2005, Israeli PM Ariel Sharon claimed he was “withdrawing completely” from Gaza. But all he did was withdraw Israel’s ground forces from the interior of the Strip and dismantle and relocate the settlements, all while maintaining its tight control over Gaza’s borders, its people, its airspace, sea access, taxation system, and population registry.  On top of this, Israel has tried to absolve itself from any of the responsibility that international humanitarian law requires of all occupying powers for the well-being and normal life of Gaza’s residents.

Consider that young people in Gaza have already lived through four massive Israeli assaults since 2008, and have likely never seen the world outside of the fenced-in territory of their tiny Strip. Also: Palestinians in cities as close to Jerusalem as Bethlehem or Ramallah–let alone Gaza–are not permitted by Israel to visit or pray in Jerusalem’s holy sites; nor are Palestinians residents of those various cities allowed to visit each other. Palestinian refugees languishing in camps outside of Palestine and within it of course continue to be denied their right of return to their native lands.

The latest Israeli assault on Gaza, horrific as it is, is simply another blip on the radar of the past 73 years of Palestinian history. The violence Israel has inflicted on us did not start with Sheikh Jarah and its displaced residents, and nor will it end in Gaza. It is part of a long-running Israeli pattern of settler-colonial domination that has divided and isolated Palestinians from one another and their land. It’s not complicated.  It’s Apartheid.

The Biden administration and every person of conscience needs to pressure Israel with all tools at our disposal to immediately end its assault and decades-long closure and blockade on Gaza– and more importantly, address the root cause underlying it: Israel’s decades-long occupation of Palestinian lands.

Israel’s leaders are so far acting with Washington-granted impunity. They act as if Palestinians, be they in Gaza, the West Bank, Lydd, or Jerusalem, have only the right to remain silent in the face of brutal subjugation and to be willing participants in their own imprisonment. To accept, in the words of the late Palestinian poet Mahmoud Darwish, “a harmless slavery, but in total ‘freedom’.”