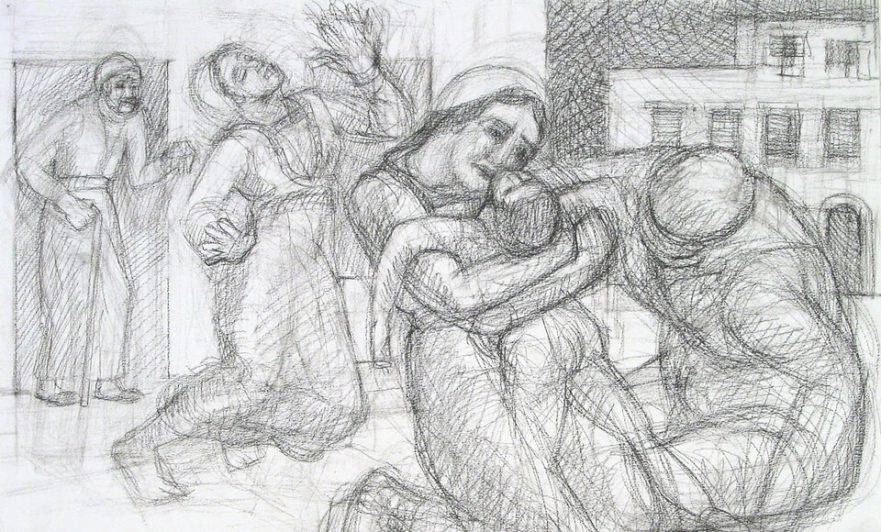 We’re pleased to re-post this essay by our board member Alice Rothchild, which was originally published at Mondoweiss.

This past year, the isolated loneliness of being a writer has been magnified by the cruelties of the pandemic. Spending five intense virtual days at the Palestine Writes Literature Festival with over 3,000 people from 75 different countries was an exhilarating and welcome relief, even though it came with the expected Zoom toxicity levels and occasional snafus. First, (once I figured out how to negotiate the snazzy and tech spectacular website – being an elder does not come with that kind of wisdom), there was such a display of creativity and brilliance from poets, novelists, historians, artists, cooks, and musicians. This warmed my weary, cynical little heart, hunkered down between the Trumpian universe, intense threats to the academy and to activists, Israel’s overtures to Arab dictators, and the general level of rejection from publishers when it comes to the P word. I also learned much more than I expected both intellectually and emotionally; my inbox is filled with the tracking numbers for so many books I have ordered and am eager to read. And any conference that ends with a fierce and poignant letter from a political prisoner, Khalida Jarrar, read by her two daughters, and a conversation between Susan Abulhawa, Hanan Ashrawi and Angela Davis has got to sparkle and inspire.

Writers spoke of indigeneity, dispossession, erasure, settler colonialism, oral history, collective memory, the right of return, Palestinian queerness, radical feminism, and the burning need to explore and document all of this in art, film, and writing. To refuse to be invisible or silenced. To write as an act of resistance. We saw this through the drawings of Samia Halaby on the 1956 Kafr Qassem Massacre and the scholarly works of Salman Abu Sitta, deliberately walking us through the horrific details of the 1948 massacre at Burayr.

Writers living both in Palestine and the diaspora, like Ibtisam Azem, Naomi Shihab Nye, Ibtisam Barakat, Sahar Mustafah, Susan Muaddi Darraj, Hala Alyan, Ghada Karmi, (forgive me for not including everyone, the list is long), talked about identity, how “our mutiny is our remembrance.” I learned that women in particular feel a responsibility to keep the culture and homeland alive. The Palestinian diaspora is different from other diasporas because of the difficulties in accessing home and the invisibility of the historical narrative in the public sphere. Women are raising children simultaneously in two places, often with a nostalgic wistfulness for life before expulsion, learning the code switching that minority communities do to survive.

Maysam Ghani talked of writing “to understand the unspeakable,” “a human response to a history of injury,” writing as a comfort to pain, “writing for the sake of collective survival,” ethically, unromantically, and filled with vulnerability.

We were reminded over and over again by writers and scholars that Palestinians are not unique; they share their own set of circumstances but are subject to the system that created the same misery in Latin America, Africa, Asia, and the United States. In this analysis, we can understand that the Israeli occupation is part of a global system, sustained by neoliberal capitalism and an international military industrial complex which oppresses all people.

One of the most fascinating presentations, particularly in view of the embrace by Black Lives Matter of the Palestinian struggle, was: “The Parallel Lives of Ghassan Kanafani and James Baldwin” with Huzama Habayeb, Rami Abushehab, Robin Kelley, and Bill Mullen. Kanafani was a Palestinian refugee, a revolutionary intellectual who embraced Palestinian identity within the context third world radical nationalism. He was the editor of a journal published by the PFLP (Popular Front for the Liberation of Palestine), an author, artist, and activist, assassinated by the Mossad in Beirut at the age of 36. (The Mossad has a long history of doing this kind of thing, FYI.)

In 1948 12-year-old Kanafani fled the Nakba. That was the same year Baldwin moved to Paris to escape Jim Crow and racism at home. They both became iconic novelists sharing a similar discourse, developing strategies to confront and undermine racism, militants with a pen searching for salvation through resistance.

I was stunned to learn that after the 1967 War, some Black Panthers trained with the PFLP, embracing a global anti-imperialist movement. This reflected a deepening split within Black solidarity for Israel and the Black liberal defense of Zionism.  The PLFP actually reached out to African Americans. The 1960s uprisings in the US and the suppression by police confirmed the idea that African-Americans also live under occupation and as Huey Newton said, national self-determination is impossible under US empire. James Baldwin encountered Arab liberation, Algerian struggles, jailed Algerians and Moroccans, and this brought him in parallel with the politics of Kanafani. In 1961 he visited Israel and was tortured by the reality, he perceived the parallels. As Mullen quoted Baldwin, “I have been in America, the Arab at the hands of the Jews.” In 1967 the Student Non-Violent Coordinating Committee (SNCC) published a manifesto stating that Zionism is settler colonialism.

There is clearly a cost to activism and solidarity. In another session Steven Salaita talked of losing his tenured position at the University of Illinois Urbana-Champaign and Marc Lamont Hill reflected on being fired from CNN after ending a speech at the UN with, “Free Palestine from the River to the Sea.” He was then threatened with the loss of his tenure at Temple University and formally censured for having “blackened the name of Temple.”

I write this essay with a bit of anxiety and much humility as I am a Jewish-American activist/writer working in solidarity with Palestinians. I am well aware that I cannot speak for people that I am not, but only as ally, I can report on what I see and understand. I was fascinated that some of the diaspora writers in exile, also worried whether they were “Palestinian enough,” to be writing their stories.

At the same time, when I hear over and over again the accounts of the genocidal behavior of Zionist forces from the 1940s to the present (see Gaza), I experience such shame and a profound sense of betrayal because I grew up on the post Holocaust redemptive creation myths around the founding of the State of Israel and its subsequent policies. I can only hope that my historical memory, which encompasses anti-Semitism, racism, mass murder, trauma, and loss will make me a better ally in this ongoing act of co-resistance.

The real beauty of this literary conference was that for the first time in history, Palestinians (and their allies) from all over the world, on every continent and in every time zone, were able to come together, tell stories, share music, chat, network, strategize on culture jamming and boycott, and feel each other’s international embrace.