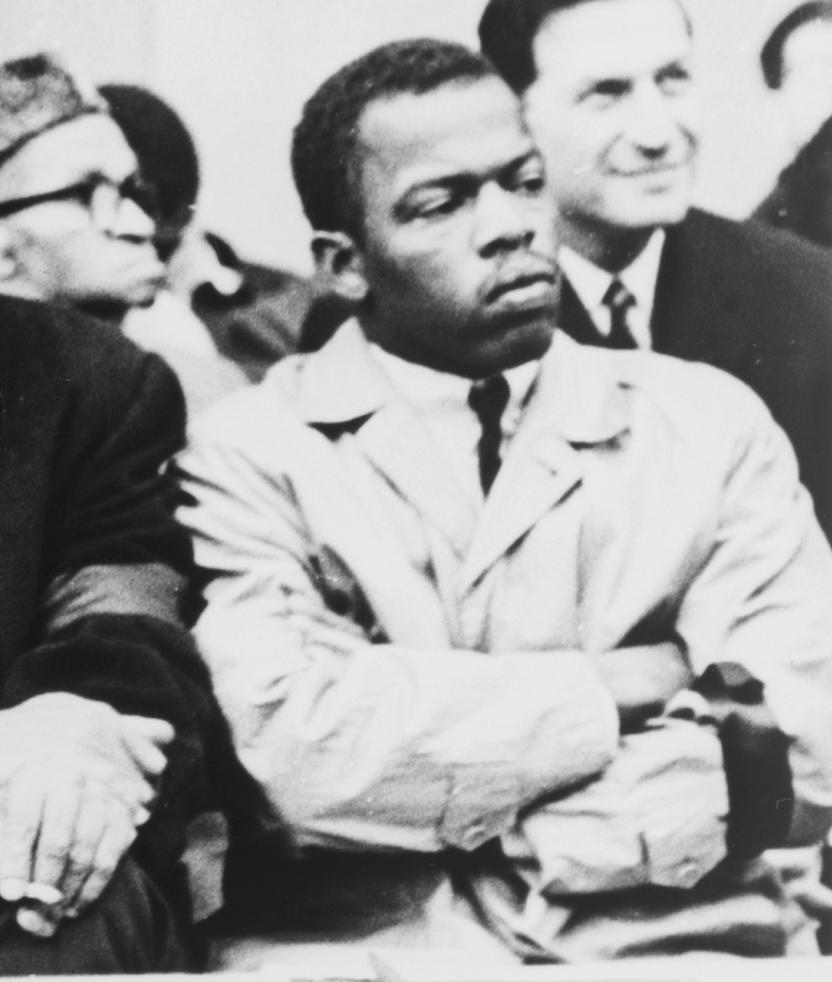 The following piece is crossposted from Global Justice in the 21st Century, the blog of JWE Board Member, Prof. Richard Falk:

Moved by the iconic recognition of John Lewis’ exceptional courage and perseverance on behalf of human rights, non-violence, and opposition to American militarism, I recall a weekend spent together in Stockholm. We were the two invited American speakers at a conference opposing the American War in Vietnam. Although I spoke at many events devoted to these themes this may have been my most memorable occasion because Lewis made such an indelible impression. We shared meals together, and were hosted at the same hotel.

It was the very late 1960s not long after the assassination of Martin Luther King, Jr. and Robert F. Kennedy, a time when these bloody events, including the Selma march and many others, brought success to the Civil Rights Movement, but far from a decisive victory that finally banished systemic racism from the American political and societal landscape. Lewis was the most radical figure in the movement against racial injustice I had encountered. At the time he was the activist leader of the Southern Nonviolent Coordinating Committee, better known as SNCC, which was seen as both dedicated to nonviolent struggle but more confrontational than the sort of national leadership provided by King.

I found Lewis engaging, brash, funny, charming, and above all, projecting a kind of radical aura that in the course of his life caused him, despite his lifelong adherence to principled nonviolence, to be the victim of repeated violent assaults by white supremacists, KKK members, and law enforcement as well as enduring 45 arrests and frequent jail time. I only learned later to appreciate his unswerving dedication to challenging racist moves to sustain the cruelties of white privilege throughout the South in every sphere of human existence, flagrantly trampling on both the rule of law and the U.S. Constitution.

In my experience of Lewis, he was as passionate about opposing American war making in Vietnam as he had been previously celebratory of African liberation struggles. He famously often asked the rhetorical question as to why Lyndon Johnson was willing to send American troops to kill Vietnamese peasants thousands of miles away but unwilling to order Federal troops to protect African Americans seeking to uphold their most basic human rights within their own country. He gave such a talk along this general theme in Stockholm, exhibiting anger about the long-embedded injustices he was devoting his life to struggle against in America, and declaring this commitment as inseparable from his opposition to the unlawful devastation and suffering being visited upon the Vietnamese, a distant people of color.

As much as I enjoyed and learned from John Lewis as he came across in Sweden on that weekend it never occurred to me that he would become a member of Congress, and even less, that he was destined to emerge as the most widely revered African American leader and inspirational figure since MLK. Of course, his death in the midst of the pandemic and in the wake of the eruption of the most sustained protests against systemic racism added a special poignancy to his death, making it a symbolic complement to the police murder of George Floyd weeks earlier. The funeral for John Lewis featured emotional eulogies by Barack Obama, George W. Bush, Bill Clinton, and Nancy Pelosi, whose collective eloquence lived up to this historic occasion, recognizing Lewis’ extraordinary dignity, persistence, and leadership. It could said that of his generation no single person better personified ‘the better angels’ of the American spirit that Lincoln summoned all of us to nurture than did John Lewis.

Thinking back to that weekend in Stockholm I marvel at how John Lewis reinvented himself, and rose to a position of moral preeminence and unsurpassed political wisdom and maturity, a progressive beacon for people like myself yet becoming mindful enough of the mainstream to win respect and exert influence almost across the entire political spectrum. The firebrand I had the precious experience of meeting over 50 years ago kept the fires within him burning brightly throughout his long life, while transforming his style so that all would listen and many would heed.

Unlike the other fallen heroes of the past century John Lewis realized the imminence of his death, and seized the opportunity to write a will and testament of faith and commitment to the American people as a whole, without a shred of bitterness or a trace of ethnic exclusiveness.

The text of his deathbed essay provide the guidance we so desperately need as a people, and an endangered species, to move toward the light despite the darkness of the hour.

I end with quotations from his essay that are so translucent as to make words of commentary or interpretation superfluous:

“Ordinary people with extraordinary vision can redeem the soul of America by getting in what I call good trouble, necessary trouble.”

“Continue to build a broad union between movements stretching across the globe because we must put away our willingness to profit from the exploitation of others.”

“So I say to you walk, walk with the wind, brothers and sisters, and let the spirit of peace and the power of everlasting love be your guide.”