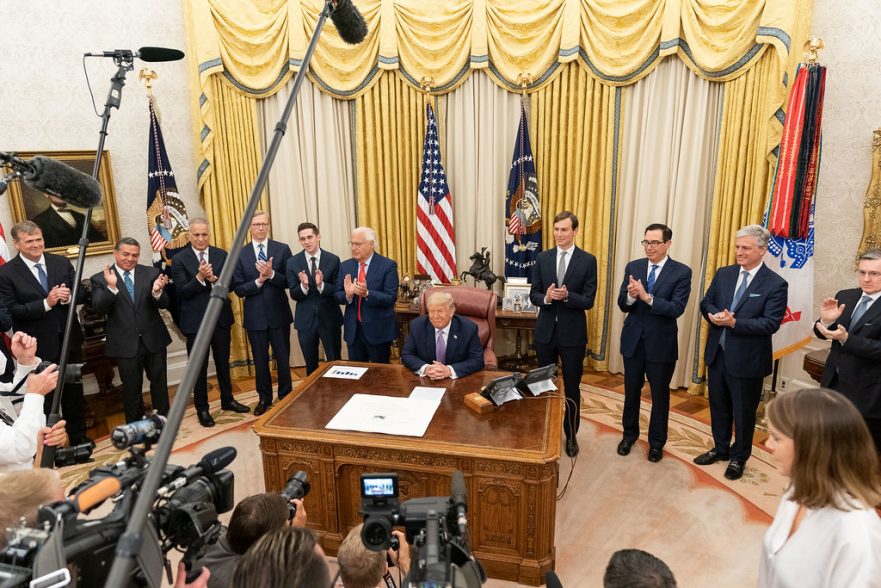 The following piece by JWE Board Member Richard Falk is crossposted from his blog, Global Justice in the 21st Century:

[Prefatory Note: Responses to Interview Questions from Javad Heiran-Nia, an Iranian journalist, on the UAE/Israel Normalization/Annexation Agreement of Aug. 13, 2020.]

Any comment on regional implications of the Agreement is, of course, highly speculative as the real reasons for such an initiative are rarely disclosed by those with the power of decision. In this case the uncertainties are magnified by some central ambiguities in the language of the text, especially the word ‘suspend’ in relation to Israeli plans to annex portions of the West Bank. This territory is considered internationally to be part of Occupied Palestine, and by Israel as ‘disputed territory.’

I would offer the following tentative reactions to the Agreement: Israel was motivated by Netanyahu’s effort to justify a delay in fulfilling his election promise to annex large portions of the occupied West Bank territory belonging to Palestine, and the Agreement provided a basis to claim compensatory benefits. Netanyahu was also under pressure to convince Israelis that he could be an effective leader, and achieve peace and security in the region while under indictment for corruption and without making concessions to the Palestinians. The Agreement can be viewed as a victory for hard line reactionary Israeli politics, and also pleased Trump by allowing him to claim credit for brokering a deal that is being touted as a ‘breakthrough’ for ‘peace.’ In this usage, peace refers to Israel/Arab relations, and ignores the unresolved conflict with the Palestinian people and their leadership.

It is less clear what motivated the UAE to act at this time. There is speculation that once ‘peace’ with Israel is achieved, the UAE will be eligible to buy advanced weapons systems from the U.S., including the latest military drones. The UAE may have also wanted to strengthen the anti-Iran coalition while Trump remains the American president, fearing that if Biden wins the November election, he might restore the agreement on Iran’s Nuclear Program negotiated during the Obama presidency but repudiated by Trump. It is also plausible that the UAE is making a move to establish its leadership among Gulf countries, and getting out from beneath Saudi Arabia’s shadow.

It is possible in order to reach a common understanding the parties agreed not to specify what was meant by the word ‘suspend’ in relation to formal annexation by Israel of West Bank territory. It is also possible that a confidential understanding among the three parties was reached that the annexation freeze would be maintained for at least six months, and that during the next six months could be ended by Israel with U.S. approval, after one year, could be ignored by Israel in moving forward with annexation.

As Trump has already claimed, this will be presented to the American people as a demonstration of the effectiveness of Trump’s deal-making diplomacy, as well as securing a victory for Israel in its efforts to achieving normalization with Arab countries without allowing the formation of an independent sovereign Palestine. The location of the signing ceremony at the White House will be a high-profile photo op for Trump, and will be conveyed to the world as a sign of continued American leadership in the search for stability in the region in ways that preserve the strategic interests of the U.S. and Israel. Whether many Americans will be very impressed by such PR showmanship remains to be seen. Some liberal American anti-Trump voices have joined in celebrating the Agreement, including a feverish puff piece by the influential NY Times opinion writer Thomas Friedman that misleadingly treats the Agreement as a ‘geopolitical earthquake’ with a positive and unifying impact on the entire Middle East. Little attention has so far been devoted in the West to how the agreement harms the Palestinian struggle for basic rights or bears on the efforts to exert pressure on Iran to conform to Western priorities.

It seems that this is an accurate, but not central consideration. These leading Gulf countries had long been cooperating with Israel in a variety of ways, including establishing economic and diplomatic links, cyber-security, and joining forces to exert pressure on Iran and to lend support to anti-government forces in Syria. It is doubtful that the Biden presidency would have challenged these political orientations if he is elected, although a changed leadership would likely review whatever promises or commitments Trump made to induce the UAE to sign the Agreement, and openly break ranks on whether to normalize Arab relations with Israel without the prior commitment by Israel to accept a Palestinian state on the territories occupied in 1967. It remains unclear whether Saudi Arabia was a silent partner to this initiative or feared that it might spark anti-regime activism within its own country, and encouraged UAE to take the lead.

There seems little doubt that the two parties to the August 13th Agreement want to put forward divergent interpretations of what was agreed upon as it bears on the Netanyahu/Trump endorsement of annexing those portions of occupied Palestine on which unlawful Israeli settlements are currently situated. The UAE to hide its abandonment of the Palestinians in their struggle for basic rights seeks to claim that obtaining the Israeli pledge to suspend its annexation plan preserves the hope for a Palestinian state that encompasses the entire West Bank. In contrast, Israel wants to convince especially its settler movement that the suspension is temporary, and when an opportune moment arises, annexation will go forward on the basis of the assertion of Israeli sovereignty. It should be understood that the territory in question has already been annexed by facts on the ground, and what is pledged by Israel is the ambiguous pledge to ‘suspend’ formal annexation for an unspecified time. The shift from de facto to de jure annexation seems to be connected with the readjustment downwards of Palestinian expectations in the event that some kind of negotiations between Israel and Palestine are resumed in the future. It may be relevant to recall that the UN partition resolution (GA Res. 181) looked to confer about 56% of Palestine to Israel after the end of the British Mandate. At the end of the 1948 War Israel increased its territorial scope to 78% of Paleestine, and it was presupposed in diplomacy that Israel would be expected to retain the territory gained by military operation and Palestinians lowered their goals to achieving statehood on the remaining 22%, which was again further eroded by the outcome of the 1967 War, and subsequent developments (including settlements, separation barrier, and other encroachments, all unlawful).

In my judgment this UAE/Israel Agreement should not be regarded as the failure of the deal of the century, but its indirect and partial implementation, which looked to vest Israeli sovereignty in 30% of the West Bank. Although Israel has agreed to suspend annexation, I think the best interpretation is that this is a temporary commitment that will be altered within a year, and then a gradual renewal of annexation will go forward, possibly without needing or seeking U.S. approval. The UAE may object, especially if Netanyahu moves too soon to revive annexation plaans, but is unlikely to undo the Agreement so long as it serves its regional strategic interests. The UAE, together with other major Arab governments, had long ago abandoned meaningful support for the Palestinian struggle and adopted policies that moved by stages toward the sort of cooperation that is now normalized and endorsed openly in the Agreement, which has the blessings of Washington and allows Israel to reassure Israelis that it is enhancing security and lessening its sense of being a regional pariah.

An alternative view of the Israel/UAE Agreement is to view it as a Plan B that is designed to hide the provisional failure of the parties and the world to accept the Trump plan (From Peace to Prosperity). The new approach pretends that the Agreement is a ‘HUGE’ contribution to peace, as Trump claimed in a tweet. The Palestinians, Turks, and Iranians know better! Also, noteworthy, the parties ignored the relevance of international law. Annexation, whether de facto or de jure was in violation of international humanitarian law, and so Israel & Trump are rewarded for agreeing to suspend what amounts to a ‘money laundering’ operation even if no money was involved.