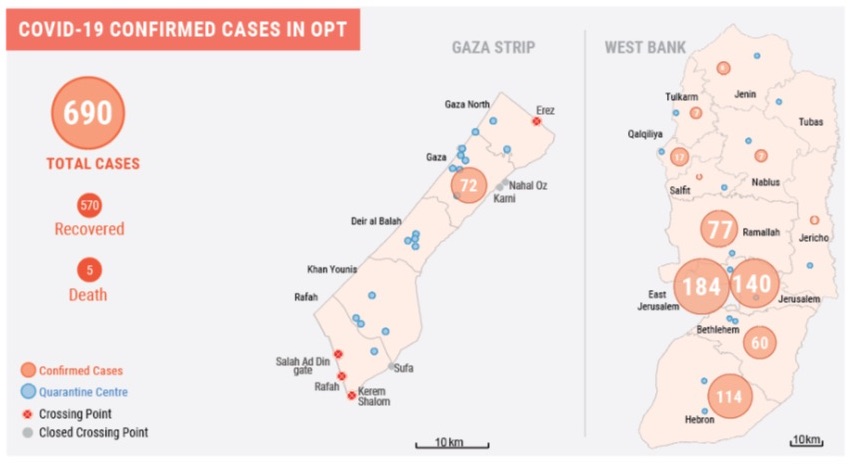 Infographic above from UN-OCHA’s report on Covid-19 in the occupied Palestinian Territories. Available here.

Alice Rothchild, MD, who is both a JWE board member and a member of the steering committee of Jewish Voice for Peace’s Health Advocacy Council, has been posting regular updates on the Covid situation in Palestine/Israel, at this web-page. Her latest figures show that “1948 Israel” had registered 18,876 cases as of June 13, while the West Bank, including E. Jerusalem, had registered 573, and Gaza 70.

Scroll down on that web-page to find not only the earlier figures, recorded weekly since late March, but also abstracts from numerous media reports on related issues. On June 8, for example, she summarized a report from Ha’aretz noting that,

Medical labs in Israel are struggling to keep up with a high volume of coronavirus tests as the number of samples taken each day has almost doubled over the past week. The main reason for the pressure is the spread of the coronavirus in schools, which has prompted mass testing. Staff are physically hurting and exhausted. Israel has a shortage of lab personnel, in part due to the low wages they earn relative to the length of their training…

As of now, it seems that the per-capita incidence of cases in “1948 Israel” is higher than in either the West Bank or Gaza, though as Rothchild notes this could be due in some part to disparities in rates of testing. The extreme vulnerability of the unenfranchised, completely Israeli-dominated Palestinian population of the occupied territories means that the health and social-welfare infrastructure available to them is much, much more fragile and fragmented than that available to Israeli citizens.

Of course, that extensive portion of the Palestinian population whose families have been refugees since 1948 subsists in many other countries, in addition to the the areas of historic Palestine that have been occupied by Israel since 1967. Since 1950, registered Palestinian refugees in Syria, Lebanon, and Jordan have all– along with those in the West Bank and Gaza–received basic relief, health, and educational services from the UN’s Relief and Works Agency (UNRWA), which has separate field offices in each of those areas.

On June 9, UNRWA released a short but information-packed report (downloadable here) on how its health teams had responded to the first 100 days of the Covid crisis in each of the five fields in which it operates. Here’s the graph they provide for the general (society-wide) incidence of Covid in these fields:

Jordan, it seems, is the hardest-hit of the five fields. (Its population of 9.5 million includes a numerical majority of Palestinians, both those registered with UNRWA and those not so registered, along with a very sizeable population of vulnerable Syrian refugees.)

The UNRWA report contains large amounts of otherwise hard-to-access information about the how Palestinian refugees in the five UNRWA fields are dealing with Covid., along with some powerful little vignettes of UNRWA health workers in action. Here is one vignette, from Syria:

The UNRWA study also underlines the extent to which, for these Palestinian refugees as for many populations around the world, preparing for the challenge of Covid has put a big strain on healthcare systems and undermined “normal” preventive medicine.

Here below are some of the charts the study presents, that show how the “Maternal and Child” visits that are a staple of UNRWA’s basic healthcare declined to almost zero in April, especially in Jordan: