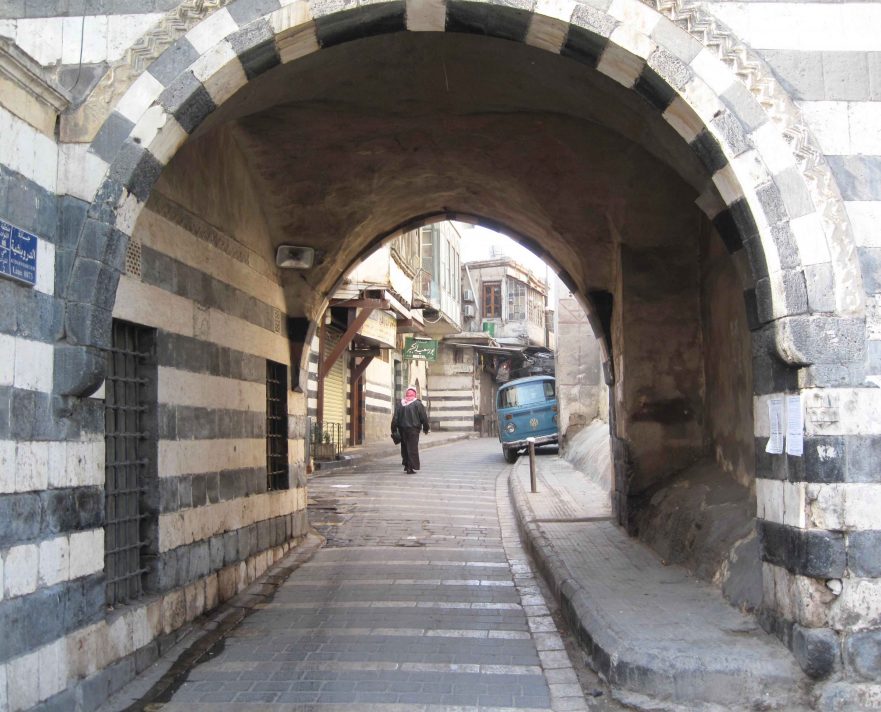 Just World Educational’s Commonsense on Syria project is off to a powerful start, with the first online Zoom webinar taking place on March 25, followed by the second on March 28. Eight more sessions are planned for the 10-session, one-month project, each focusing on different areas of concern and specification in relation to Syria, the ongoing conflict and the role of foreign powers.

To attend the upcoming eight sessions, interested participants only must register once. You can do so at this link: https://zoom.us/webinar/register/WN_WZV_6U1KTjaJSXk71AyWEA

You can also explore the resources collected by Just World Educational for additional background at this link: bit.ly/Syria-resources.

The Commonsense on Syria series has seen an engaged, active audience with high levels of interest in the topic and a significant number of questions about both facts and interpretations. Just World Educational even had to expand its Zoom webinar account in order to accommodate all of the participants interested in taking part in these sessions, indicating the appetite of attendees for critical, open discussion about Syria.

This series was originally envisioned as a series of public talks as well as private meetings with think tanks and U.S. officials. Due to the COVID-19 global pandemic, it has been moved online, providing the opportunity for a broad audience to engage with incisive analysis and important perspectives about Syria and U.S. “regime-change” wars.

Audience members have included a wide range of individuals interested in Syria, including people who are active in the Palestinian rights movement, the anti-war movement and other social justice movements, as well as educators, researchers and academics. While the Zoom webinar platform differs from that of Zoom meetings in that it is set up for presentations rather than discussions with the audience, the Just World Educational team reviews questions that are sent in via the program’s chat function.

After each webinar, we ask participants to complete a survey with their assessment of the program, and during each session, they are offered the opportunity to participate in several polls that appear on each person’s screen.

Session 1: Introduction to Syria and its history

The series launched on March 25 with our first session, “Introduction to Syria, its people, and history pre-2011,” moderated by Just World Educational President Helena Cobban – who has also researched and written widely on Syria – with two speakers, Prof. Joshua Landis and Amb. Peter Ford. This session was framed to provide a historical basis that could prove helpful in understanding current political issues and later developments in Syria over the past decade.

Amb. Peter Ford was the United Kingdom’s ambassador to Syria between 2003-2006. Ford went on from there to be the chief representative of the head of the UN agency UNRWA to the Arab world. In that capacity, he traveled throughout the Arab world, including on a number of occasions to Syria, which is host to more than 500,000 UNRWA-registered Palestinian refugees.

Prof. Joshua Landis is the Sandra Mackey Chair and Director, Center of Middle East Studies and Arabic at the University of Oklahoma. Landis has published widely on Syria and is the publisher of (and a frequent writer at) the “Syria Comment” blog.

This introductory session was attended by 109 people, including 103 who attended using the Zoom app on either desktop or mobile, and six who joined via telephone call-in. Attendees were asked to register in advance for the session and were asked optional questions, including where they were registering from. While 87 of this group answered those questions, 77 indicated they were in the United States, while 10 people said they were attending from four other countries.

During the session, participants were asked several polls before and during the discussion with Amb. Ford and Prof. Landis. JWE President Helena Cobban guided the discussion with introductory remarks and a series of probing questions designed to draw out areas of interest in relation to Syria’s long-term history and provoke meaningful comment and discussion. As she did so, she presented these polls, and their results, to the attendees.

74 participants answered our poll asking if they had ever been to Syria. The numbers reflected a range of experiences. While the majority – 46 – said that they had never been, 14 had visited once or twice, five less than 10 times and nine greater than 10 times.

When asked about how they receive information about Syria and news and developments there, the answers reflected a variety of takes. People were allowed to choose more than one answer, and the largest group – 42- cited “alternative” media sources like Truthout and Common Dreams. 37 said that they relied on mainstream, corporate media like the New York Times and Washington Post, while the same number looked to specialized Syria or Middle East news sites like Syria Comment or Middle East Eye. 22 got their news from Facebook, 14 from Twitter, and 14 from other sources.

Questions from audience members indicated that many were enthusiastic about future sessions, with participants asking for more information about U.S. involvement in Syria historically and at present, the situation of Palestinians in Syria, and the Syrian government’s relationship with Israel, in terms of the latter’s occupation of the Golan and its involvement in regime-change initiatives.

The full video of the session can be viewed online here: bit.ly/COS-1-video

Audience members had a wide range of comments about their interest in the Commonsense on Syria series, including:

“I’m Syrian, so I’m interested how the west hears about us and how they can get a balanced reporting of what’s happening there.”

“We need more of this kind of discussion on Syria and other places that are not in the “News” like Cuba, Iran, Ukraine, Yemen and Venezuela.”

“I want to know more about the geopolitical situation: Who is China and Russia backing? Who is sitting on the fence, the situation in the Turkish/Greek border, and why certain countries are more important.”

This expressed desire for a deeper interpretation of the events often portrayed in the news was also reflected in the Commonsense on Syria program’s second session, “The Syrian Uprising in the context of the Arab Spring.”

Session 2: Syria and the Arab Spring

Convened on March 28, this webinar was hosted by JWE President Helena Cobban and once again featured two speakers, Prof. Richard Falk and Vanessa Beeley. Prof. Falk is a world-renowned expert on international law who spent six years, 2008-14 as the UN’s Special Rapporteur on the Human Rights of the Palestinians of the Occupied Territories. He also serves as a member of the JWE Board.

Vanessa Beeley is a British journalist who has reported from Libya, Syria and elsewhere. Beeley was a finalist for the 2017 Martha Gellhorn Prize for Journalism, and her groundbreaking work from Syria has been endorsed by John Pilger and other leading investigative reporters.

Ms. Beeley joined directly from sanctions-hit Damascus, leading to some technical challenges when her connection cut off partially through the discussion. Amb. Ford, our panelist from the previous session, stepped in for part of the discussion. However, she was later able to rejoin the webinar. Sanctions, and the importance of ending U.S. and other countries’ unilateral coercive measures against Syria, was one area of agreement that stood out for both Prof. Falk and Ms. Beeley.

This session involved a lively exchange of ideas guided by JWE President Cobban, who drew the speakers’ attention to several issues, including the role of foreign intervention in Syria from 2011 forward, the origins of the Syrian conflict, and potential points of positive action for citizens of Western countries.

While the participants expressed areas of sharp disagreement, the exchange was respectful and elucidating throughout.

The full video of the session is available here: bit.ly/COS-2-video

Here, 106 participants joined the webinar using the Zoom app on desktop or mobile. 99 of these attendees answered the question of where they were attending from, with 85 joining from the U.S. and 14 from six other countries.

Once again, polls were deployed throughout the discussion to gather information about audience members’ ideas and thoughts about Syria and the information being presented. When asked if they could name any Syrian opposition movements or leaders they admired, 59 participated in the poll. 30 said they were not familiar enough to name any, 19 said that they knew of them but did not admire them, while 7 each said that they admired the YPG/SDF, or other movements or leaders.

Participants were heavily critical of U.S. and NATO military intervention in Syria. Of the 63 that answered a poll, 51 opposed it in 2014 through the present day, 7 said it was necessary at the time but regrettable, three said it should have ended a while ago, while only 2 said that this intervention was positive and timely.

In the discussion about moving forward for Syria, poll respondents expressed a strong desire for a positive solution. Of the 50 who responded to a poll asking if it was possible to ramp down or end the war in Syria while President Bashar al-Assad remained in power, 43 answered affirmatively, with only seven answering in the negative.

After the session, participants in the evaluation were once again overwhelmingly positive. On a 1 through 5 scale, they rated the informative/educational value of the webinar at 4.3. They indicated a strong likelihood to participate in future sessions, with a 4.5 average rating on a 1-5 scale.

Audience comments were once again illuminating:

“Helped confirm my perception that most of what we hear about Syria is wrong.”

“Reinforced my belief in the confusing complexity of the situation.”

“That the complexity of the situation renders most of the corporate media commentary on the subject consistently inadequate and wrong.”

“I understand better why activists have conflicting views!”

The Commonsense on Syria series will continue on April 1 with session 3, “U.S. policy toward Syria.” The session will feature Ms. Mona Yacoubian, a Senior Advisor to the Vice President for Middle East & Africa at the U.S. Institute of Peace. Her work centers on conflict analysis and prevention in the Middle East, with a specific focus on Syria, Iraq, and Lebanon. In 2019, she served as executive director of the Congressionally-appointed Syria Study Group, which USIP was mandated to facilitate.

Registration for this and all other sessions is available at this link: https://zoom.us/webinar/register/WN_WZV_6U1KTjaJSXk71AyWEA

Read more about the series at this JWE blog post, and learn more at our resource page: https://bit.ly/Syria-resources

We look forward to welcoming you as we continue the conversation about Commonsense on Syria.