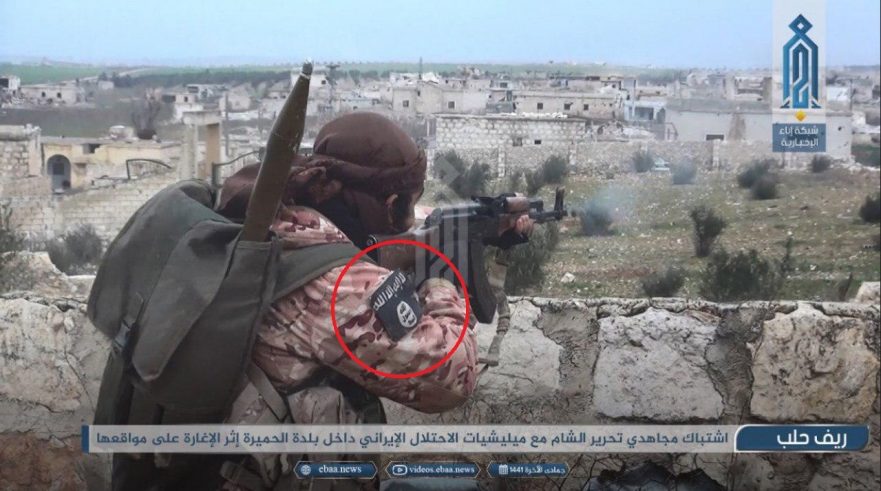 Our President, Helena Cobban, has been writing a lot about Syria recently– primarily at her personal “Just World News” blog, though many of her articles have been crossposted in full elsewhere, including here. (See, for example, these two pieces: 1, 2.) In the past week, she has published three new pieces on Syria at JWN.

In these two (Feb. 17 and Feb. 20) she continued her trenchant criticism of the way much of the US corporate media, but especially the New York TImes, has represented– or misrepresented– the situation in Syria’s northwestern Idlib province. Her principal criticism is that the NYT continues to make no mention of the fact that the three million residents of the war-torn Idlib enclave are existing under the near-total control of the Al-Qaeda-affiliated Hay’at Tahrir al-Sham (HTS) militia and its allies

(The photo above is a screenshot from a recent video produced by a video outfit associated with one such militia, bragging about its members’ participation in the fighting in the Idlib enclave.)

As Ms. Cobban explains in the second of the pieces described above, the decision by the NYT and many other Western media to omit any mention of HTS’s control over Idlib does a grave disservice to readers in a number of ways. One of them is that it leaves readers quite ignorant about the challenges (and the possibilities) of achieving a negotiated peace in the province.

By the way, do note that the spokesperson for the US military’s Operation Inherent Resolve (anti-ISIS) forces in Syria and Iraq, Col. Myles Caggins II, definitely agrees that Idlib is under the control of (and a magnet for) dangerous terrorists who are holding the local population hostage. Check out what he said on the subject in this recent TV clip.

In the third of her recent pieces about Idlib, Ms. Cobban took an in-depth look at the moral and legal challenges aid groups face as they try to find ways to deliver aid to very needy communities in the Idlib enclave without letting that aid fall into the hands of HTS or HTS-auxiliary organizations. In the past, these latter organizations have shown their willingness to use aid goods to increase their leverage over the local populations that are essentially held hostage by them.

Ms. Cobban has been writing about– and reporting from– Syria since 1976. But she also has considerable experience in other conflict zones to draw on. In the early 2000s, she researched and wrote a book about post-conflict justice issues in Rwanda, South Africa, and Mozambique; and as part of that research she became very familiar with the sharp challenges international aid organizations faced in 1994-96 as they tried to serve displaced populations of Rwandan Hutus who were being completely controlled in eastern Zaire by the genocidal “Interahamwe” militia.

In her February 20 blog post, Idlib and the ‘Interahamwe aid trap’, she explored the many parallels– and the differences– between the two situations.

In the fast-moving– and extremely crisis-riven– situation that is unfolding in Idlib, it is good to have as many well-reasoned information resources as possible to draw on. Another resource we’d like to note is this recent report by the Crisis Group on an in-depth interview that one of their staffers and the Geneva-based Center for Humanitarian Dialogue conducted recently in Idlib with HTS leader Abu Muhammad al-Jolani.