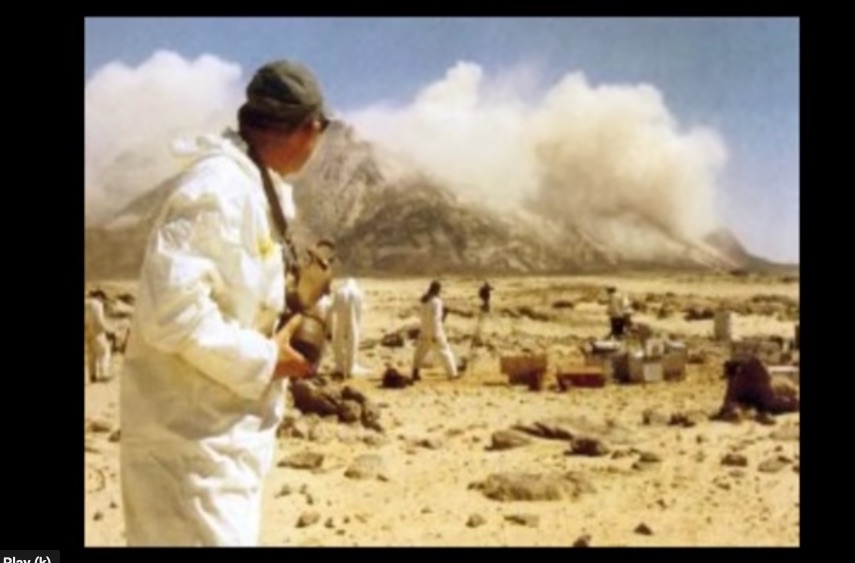 Sixty years ago today, the French military launched its first nuclear test in Reggane, in the south of Algeria– at a time when the French government still considered that the whole of Algeria was “a part of France.”

The test at Reggane was the first of 13 nuclear tests that a specialized unit of the French military launched in Algeria. That one, like all but one of the tests that followed, was extremely “dirty”, spewing out a cloud of radiation that affected much of Africa north of the Equator– and even reaching the Spanish coast and part of Sicily– but not mainland France itself. (The image above is a still from this video, that shows a very dirty later test, at an area called “Beryl.”)

In 1962, the Algerians achieved their independence after a lengthy and very difficult liberation struggle. As part of the “Evian Accords” through which they achieved this, they were forced to allow France to continue to use the nuclear test-sites in southern Algeria for a number of additional years.

Today, two informative articles in the Algerian media mark this somber 60th anniversary. This one, “60 years after the 1st French nuclear test in the Sahara, called ‘Gerboise Bleue’ / Neither recognition nor reparation on the part of the French State” is by Nadjia Bouzeghrane, in El Watan. A translation into English can be found below. This one, “60 years ago, France carried out the first nuclear test at Reggane”, is on the Algerie 360 news site.

(It should be remembered that the French government worked closely with Israel to help Israel also develop its own nuclear-weapons capability, as detailed in Pierre Pean’s excellent book Les deux bombes. The main proponent and negotiator of those arrangements on the Israeli side was the country’s “Mr. Peace”, Shimon Peres.)

Some good information about France’s nuclear program in Algeria can be found on Youtube, including here, and in Wikipedia.

Here in solidarity with our friends and colleagues in Algeria on this sad day, is my translation of Nadjia Bouzeghrane’s fine article:

60 years after the 1st French nuclear test in the Sahara, called “Gerboise bleue”

Neither recognition nor reparation on the part of the French State

On February 13, 1960, the French state tested its first nuclear test, “Gerboise bleue”, at Reggane, in southern Algeria. Its fallout affected much of Africa, north of the equator. Thirteen days later, it reached the Spanish coast and covered half of Sicily! Of the thirteen shots fired between 1961 and 1966, twelve were the subject of radioactive leaks.

The day after the explosion of “Gerboise bleue”, the first atomic bomb dropped in the Reggane desert, the radioactive cloud arrived in Libya, crossed part of Niger to reach the surroundings of N’Djamena, capital of Chad. At D + 4, the fallout covered thousands of square kilometers to reach Nigeria, Ghana, Côte d’Ivoire and Mali. Nine days after the drop, the cloud covered all of southern Algeria and sub-Saharan Africa.

Similarly, 12 days after the explosion, the radioactive fallout reached Algiers via Western Sahara and Morocco. And the next day, the cloud crossed the Mediterranean Sea and approached the Spanish coast and Sicily, according to a document revealed by the Armaments Observatory / Center for Documentation and Research on Peace and Conflict (CDRPC) in 2009. The 1996 report was titled “The genesis of organization and experiments in the Sahara (CSEM and CEMO)” and made public by the French press.

According to the Armaments Observatory, the overall number of documents classified as “defense secret” relating to French nuclear tests in the Sahara and in Polynesia (1960-1996) declassified by the French Ministry of Defense is paltry: less than 5%. And this declassification results from the legal proceedings initiated in 2004 by associations of victims of French nuclear tests in Algeria and Polynesia, Aven and Moruroa and tattooed at the Paris Prosecutor’s Office.

Of the 154 documents declassified in March 2013 relating to Algeria – recovered by the French associations of victims of nuclear tests in November 2013, around thirty are of interest, according to the late Bruno Barrillot, co-founder with Patrice Bouveret of the Armaments Observatory / Documentation and Research Center for Peace and Conflict (CDRPC), which analyzed them.

In addition, underlines the expert, the ” Gerboise bleue” card which was one of these declassified documents,

contradicts the map of radioactive fallout published by the French Ministry of Defense in 2007 in a document on the French tests in the Sahara, presented as a pledge of transparency when the Algerian government organized an international conference in Algiers on the environmental and health consequences of nuclear tests.

The demarcation of the ‘Gerboise bleue’ fallout from the 2007 document had been seriously modified compared to what actually happened in 1960 and indicated only a tiny ’angular sector’ covering an uninhabited area east of Hamoudia’s zero point.

And to indicate that, comes this map of 2007 [Not presented ~JWEd.] which served to delimit the Saharan geographical area where civil and military personnel and populations should be located to benefit from the law of compensation for the victims of the French nuclear tests of January 5 2010, known as the Morin Law, named after the Minister of Defense who had him voted.

While the 1996 report titled “The genesis of organization and experiments in the Sahara (CSEM and CEMO)” was not part of the declassified documents of the Saharan series when it had been widely disseminated and commented on in the press in 2010. Its disclosure in 2009 by Damocles (Observatory review, No. 128-129) highlighted that the French nuclear tests in the Sahara were not “clean”.

Even if it provides information previously unknown, it is indeed an ‘official rereading’ of the French nuclear test period. The editors had to sort through the source documents, which explains the inconsistencies and especially the silences and omissions… This is clearly the case for the “failed” tests in the Sahara, in particular “Green Gerboise” or the Beryl shooting accident .

We learn that out of the thirteen shots fired between 1961 and 1966, twelve were the subject of radioactive leaks. Only the “Turquoise” shot of November 28, 1964 did not cause radioactivity outside. “The consequences of this radiation did not stop with the end of the tests and the administrative closure of the sites, but still persist today, both given the very long lifespan of certain radioactive elements and the fact that France left a lot of nuclear waste buried in the desert ”.

Sixty years after the first A-bomb was dropped at Reggane, the French government should finally take into account requests for information and access to the nuclear test archives from Algerian authorities and victims’ associations.

Because ensuring transparency on nuclear tests by declassifying significant files and reports—and there are thousands left– would help advance the truth and do justice to direct victims and future generations. And also because the communication of the cartography of the landfills is essential to secure them and possibly group the waste according to standards in accordance with international regulations.

This is what made the late Bruno Barrillot say (El Watan of February 13, 2014) that

Franco-Algerian cooperation actions, in particular on the decontamination and securing of the old test sites of the Sahara would allow, in addition to the necessary rehabilitation, to train actors and experts from both countries in these high-tech fields .

Actions of this type, by multinational teams, exist for the elimination of anti-personnel mines around the world, including, I believe, in Algeria. Why not do the same to manage the effects of nuclear tests?