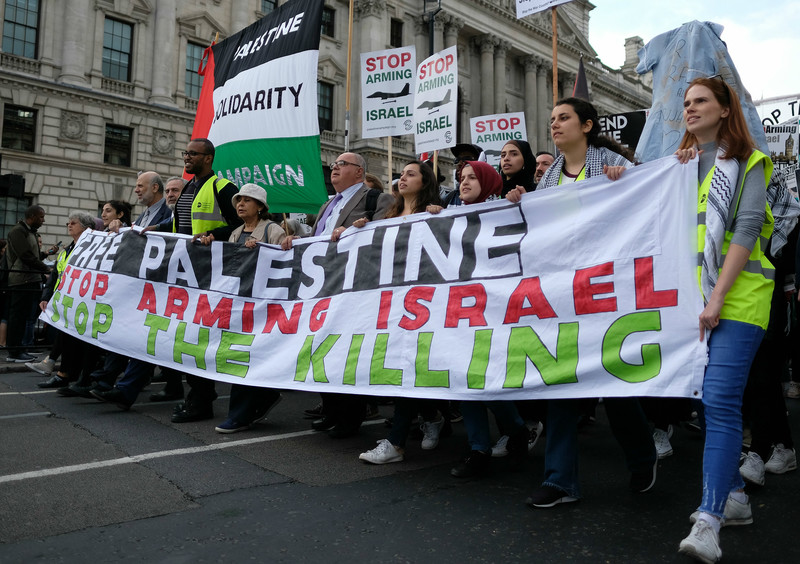 For years, many Palestine solidarity advocates have been hesitant to call for US sanctions on Israel because it has been considered too “unrealistic.” Instead, most have been calling for consumer boycotts and corporate divestments, and those who lobby the US government have mainly focused on challenging it to re-think the massive foreign military assistance it provides to Israel.

Using US-based legal frameworks, activists have been trying to pressure the US government to exercise responsible oversight of that aid. Although this oversight has never actually been applied to Israel, it is important for activists to understand what these mechanisms are, what they have the potential to achieve, and what additional new mechanisms can be explored and utilized.

Since 1961, the Foreign Assistance Act (FAA) has explicitly barred the United States from providing assistance to any country that engages in gross violations of human rights. In the mid-1990s, Congress added a small but extremely important amendment to the FAA: Amendment 620M, also named the Leahy Law, after Sen. Pat Leahy (D-VT), who worked tirelessly for its passage.

The Leahy Law bars the US Department of State from providing foreign aid to security force units that have committed gross violations of human rights and mandates a vetting procedure to ensure that units have not committed such violations. A parallel, though slightly different, provision is included in the annual funding legislation that governs the Department of Defense’s portion of foreign military assistance. Nearly 100 countries around the world receive Foreign Military Finance (FMF) assistance from the US. Of the total sum allocated, Israel gets more than half– currently, $3.3 billion/year.

A 2014 report found that between 2011 and 2013 the US government implemented Leahy Law vetting on 530,000 foreign units, ultimately finding that 2,516 of these units were credibly linked to gross violations of human rights in those years. Not one of those units was in Israel. Even more astounding is that unlike every other country in the world, the US government has no mechanism to track or vet US military aid to Israel.

US government spokespeople claim that Washington complies with the requirements pertaining to training programs the US runs for Israeli units – which might be true — but the cost of these training programs is a drop in the ocean compared to the overall $3.3 billion of FMF spending. For example, in 2018, the US government spent $885,459 (using FMF) to train 66 Israelis – that is %0.02 of the FMF aid, leaving %99.98 unaccounted for.

In February 2016, Sen. Leahy and ten other members of the US Congress wrote to Secretary of State John Kerry asking the State Department to implement the Leahy Law for units receiving US military aid in both Egypt and Israel. The letter was met with swift pushback, including from Israeli Prime Minister Netanyahu himself, and the issue was never fully addressed by the US government.

Some members of Congress, meanwhile, have been trying to draft and enact new laws to increase Israel’s accountability. One of them is Rep. Betty McCollum (D-MN) who introduced H.R. 2407, also known as the Promoting Human Rights for Palestinian Children Living Under Israeli Military Occupation Act. The bill seeks to stop one small but important subset of Israeli abuses by prohibiting any US military aid from being used “to support the military detention, interrogation, abuse, or ill-treatment of children in violation of international humanitarian law.” Realistically, however, there is little prospect that H.R. 2407 will become law any time soon.

What can we do to hold the US government accountable if it is failing to hold itself accountable?

The answer to this question might be a combination of continuing to pressure the US government through all the tools that have been previously utilized, and adding new options to our toolbox. This would include other mechanisms that could be employed under international law, rather than US law, by invoking nation-states’ responsibility to impose sanctions on Israel (or on the US for failing to hold Israel accountable).

There are binding requirements under international law for the US and all other states to not recognize as lawful any “illegal situations,” such as Israel’s settlements outside the Green Line. This obligation prohibits not only explicit recognition of illegal settlements, but extends also to actions that would imply recognition — such as trading with these settlements. The international community and expert bodies, including the International Court of Justice (ICJ) and United Nations Human Rights Council, have long considered Israel’s settlement building outside the Green Line as unlawful, mostly because it is a clear violation of the Geneva Conventions.

All parties to the Fourth Geneva Convention are obligated to “ensure respect” for the Convention. As a signatory to the 1949 Fourth Geneva Convention, which refers to the Protection of Civilian Persons in Time of War and defines humanitarian protections for civilians in a war zone, the US government has an obligation to “ensure respect” for the Convention which defines Israel’s settlement-building as unlawful. Other governments have an obligation to hold the Israeli government accountable, as well as the US government for its role in supporting an “illegal situation.”

Putting this into practice

It will take an orchestrated effort by US-based activists and organizations to work with international and regional bodies, or even with other governments taking unilateral or multilateral steps, to compel the US and Israel to abide by international law.

Most US-based supporters of the Boycott, Divestment, and Sanctions (BDS) campaign for Palestinian rights have focused their energies so far on the “B” (boycott) and “D” (divestment) prongs of the campaign. Pursuing the “S” has seemed like a difficult stretch if we were to define it as “Sanctions,” such as the ones that were enacted against pre-1992 South Africa for its commission of the crime of apartheid.

If we reconfigure the “S” to mean compelling the US government to fulfill its State Responsibility while dealing with Israel – or ask other governments to step in and compel the US – then we already have some of the tools needed, in both national legislation and international commitments, to push this campaign forward. In this way, adding “State Responsibility” to the movement’s toolbox can be an important asset in the campaign for Palestinian human rights.

Raed Jarrar (@raedjarrar) is a Palestinian-American political analyst and advocate.