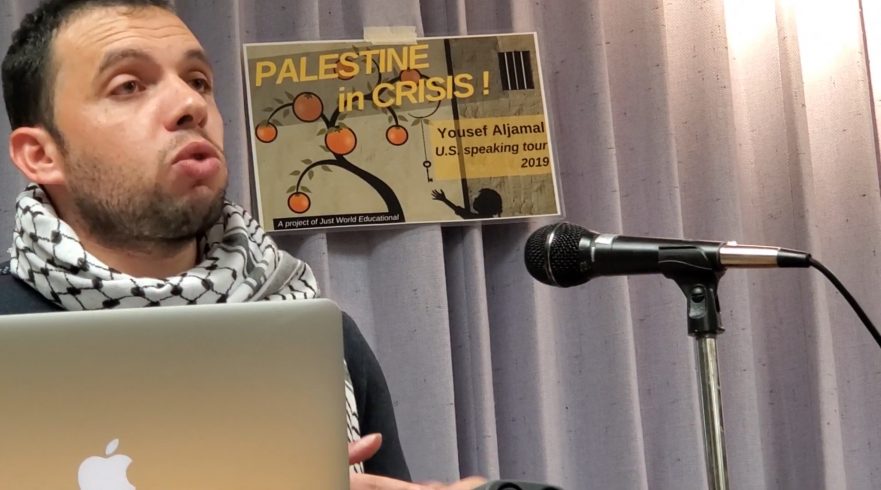 At the end of October, our star speaker from Gaza, Palestine, Yousef Aljamal, wrapped up his hectic speaking tour of the mainland USA. Now, he is Hawai’i– where he also has a full speaking schedule.

Yousef spoke to audiences and classrooms across the continent, focusing on two main issues: the plight of Gaza’s two million residents after suffering 13 years of tight Israeli siege and the plight of Palestinian children caught up in the harsh detention system that the Israeli military has run in the occupied West Bank for the past 52 years.

In an earlier post on this blog we reported on some of his early activities on the tour, including the very valuable visits he made to various Congressional offices– including face-to-face meetings he had with four Members of Congress.

We have put a photo album of the tour up onto our Facebook page, containing photos the numerous event hosts and attendees sent us from around the country. In case you’re not on Facebook, we’ll put some of the best of those photos in a gallery here. Scroll on down to see it.

A few of the events Yousef spoke at were videotaped. So if you were not able to get to any of his events, do make a point of watching this excellent 33-minute video that we received from our friends in Portland OR. It contains the basic presentation that Yousef gave, in different versions, throughout the tour.

We want to thank the many organizations and individuals around the country whose commitment and dedication made this tour possible.We were particularly pleased that Yousef was able to speak to a number of college classrooms and even, in Madison WI, a high-school class. We are all deeply committed to expanding the discourse in the United States on the Question of Palestine as effectively as we can!

Yousef spoke to a dozen sizeable live audiences on the US mainland, from White Plains NY through Washington DC, Richmond and Williamsburg VA, Atlanta GA, Milwaukee and Madison WI, and Portland OR. Now, in Hawai’i, he has been able to connect with the indigenous activists resisting plans for “White” encroachment on the sacred mountain at Maunakea. He will also be speaking on a panel on Palestine to be held at the American Studies Association’s annual conference, due to be held in Honolulu November 7.

So now, here is the short version of our photo gallery: