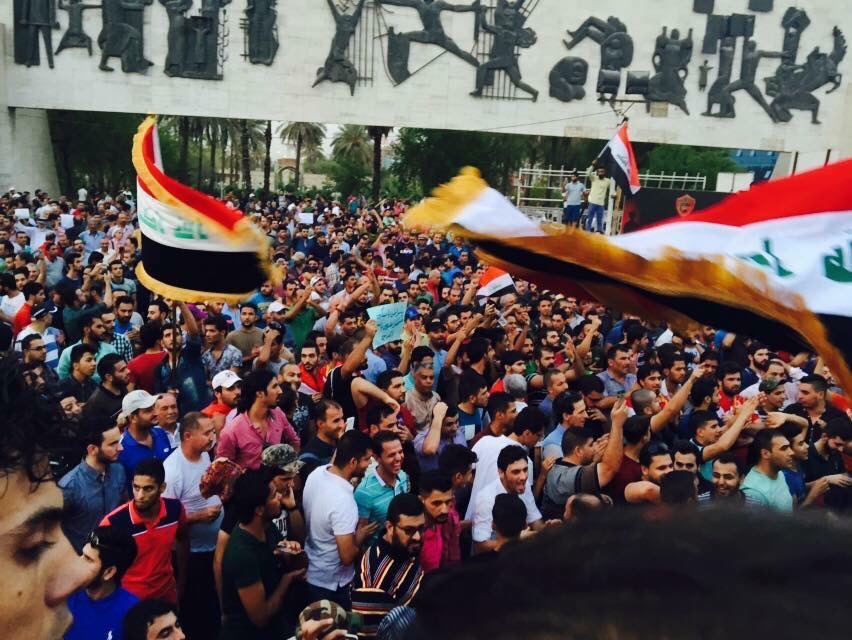 During the last 6 weeks, over 300 Iraqis have been killed and over 15,000 injured in a bloody uprising that has been absent from US headlines.

Inspired by the uprising in Lebanon and demonstrations in Egypt, in October Iraqis took to the streets to protest their own government. Most of the protesters are a new generation of young Iraqis who came to age after the US-led invasion of Baghdad in 2003.

After the invasion, the new Iraqi regime adopted a narrative that justified its flaws by comparing them to Saddam Hussein’s authoritarian government. But for the Iraqi youth who never lived under Saddam’s reign, that narrative hasn’t held any weight and certainly hasn’t excused the corruption and dysfunctionality of the current government. Fed up, the youth have shocked the political class by sparking a new wave of protests that is challenging the foundation of the political process.

The protests were initially sparked by everyday frustrations: widespread unemployment, lack of access to public services, and rampant government corruption. Iraqi protesters know these issues cannot be resolved without system-wide change — and as a result, their demands have focused on two main themes: ending foreign interventions, and abolishing ethno-sectarian governance.

These demands pose an existential threat to the entirety of the political class in Iraq installed after the 2003 invasion, and more importantly, they are also a threat to foreign powers that are invested in the current regime — mainly the United States and Iran.

An End to Foreign Interventions

Unlike how the US and Iran have typically had proxy wars in the Middle East where they are on opposing “sides,” Iraq has curiously been an exception to that. Iran and the United States have supported the exact same political parties in Iraq since 2003. It just so happens that, for geopolitical reasons, dividing Iraq into sectarian and ethnic enclaves and supporting those Sunni, Shia, Kurdish and other ethnic-based parties was aligned with both the interests of the US and Iran.

Both countries have been supporting the current regime in Iraq politically, but more importantly, supporting it by supplying it with all the weapons, training, and personnel it needs to survive. The US has sent over $2 billion to the Iraqi regime since 2012 as a part of the annual Foreign Military Financing package. The US has also sold the Iraq regime over $23 billion worth of weapons since 2003. To protect the Iraqi regime from its own people, Iranian-backed militias have participated in killing demonstrators. Amnesty International recently reported that Iran is the main supplier of tear gas canisters that are being used to kill Iraqi protesters every day.

The Iraqi regime’s corruption and dysfunctionality are symptoms of it being reliant upon foreign powers like the US and Iran. Iraqi government officials don’t care if Iraqis approve of their performance, nor do they care about the fact that the majority of Iraqis lack basic services, because that’s not the foundation of their existence.

Iraqi protesters – regardless of their sectarian or ethnic background — are fed up with living in a client state that has no sovereignty and is one of the most corrupt, dysfunctional governments in the world. They’re calling for all interventions to end, whether it be from the US, Iran, Saudi Arabia, Turkey, or Israel. Iraqis want to live in a country that is ruled by a government that is reliant on its people, not foreign powers.

In 2003 the US set up a political governance structure in Iraq which was based on ethno-sectarian quotas (the president is Kurdish, the Prime Minister is Shia, the President of Parliament is Sunni, etc.). This imposed system has only created and entrenched divisions within the country (which were minimal before the US-led invasion), and led to the creation of ethno-sectarian militias and destruction of a unified national armed force. Within this structure, politicians are appointed not based on qualification, but rather their ethnic and sectarian background. As a result, Iraqis have been displaced to ethnic and sectarian enclaves, and the country is led by ethnic and sectarian armed militias and warlords (ISIS was one example of this). The current political class has only ever operated in this way, and the youth have organized and risen up all across sectarian backgrounds to demand an end to it.

Iraqi protesters want to live in a unified country that is ruled by a functional government where officials are elected based on their qualifications– not their affiliation with a sectarian political party. Furthermore, the way the electoral system in Iraq works now is that Iraqis mostly vote for parties, not for individual members of Parliament. Most parties are divided along sectarian lines. Iraqis want to change the system to voting for individuals who are held accountable for ruling the country.

What can US Americans do?

In a way, what Iraqi youth are revolting against now is a regime that was built by the US and blessed by Iran in 2003. This is a revolution against the US legacy in Iraq that continues to kill Iraqis and destroy their country.

The US has an awful record in Iraq. US crimes that started with the first Gulf War in 1991 and intensified during the 2003 invasion and occupation continue today through the military and political support given to the Iraqi regime. There are many ways to stand in solidarity and support Iraqis today – but for those of us who are US taxpayers, we should start by holding the US government accountable. The US government is using our tax dollars to subsidize a brutal and dysfunctional regime in Iraq that could not stand on its own — so while Iraqis are revolting against this foreign-subsidized regime in their country, the least we can do is call upon our government to cut its aid to the Iraqi regime, and to stop sponsoring the murder of Iraqis.

Raed Jarrar (@raedjarrar) is an Arab-American political analyst and human rights activist based in Washington, DC.