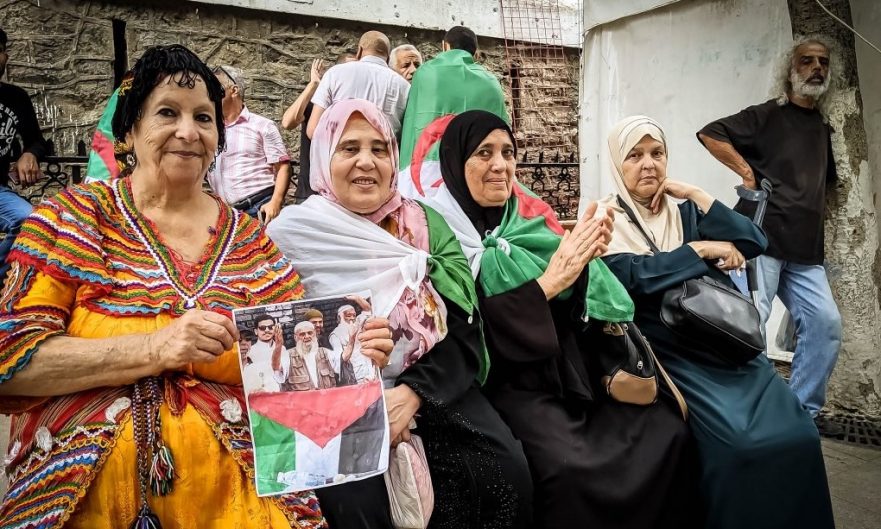 We’ve been following Algeria’s popular-democracy movement almost since its weekly Friday mass demonstrations– known collectively as “the Hirak”– erupted onto the streets of the country’s numerous cities and towns back in late February. So we were delighted to learn that the latest round of demonstrations, Sept. 20, were some of the largest and most spirited the country had seen for a while.

This, despite the fact that the country’s interim (and de-facto) ruler, Army Chief of Staff Ahmed Gaïd Salah had decreed just days before that no non-residents of the capital, Algiers, could enter the city on Friday.

There are two good French-language news sites from Algeria that we’ve been following. One is TSA-Algerie, which had this great (reverse-chrono) roundup of many of the demonstrations that happened, all around the country, along with handheld video from some of them. The other is Algerie360, which had this informative short article (and great photo spread) from just Algiers, of different parts of the demonstrations that erupted there as a strong popular answer to Gaïd Salah’s ban.

The photo above, showing some the Hirak’s staunch supporters– one in traditional Amazigh dress and carrying a Palestinian flag– comes from the Algerie360 photo spread.

Here’s our best quick translation into English of the Algerie360 article:

The power embodied by the chief of staff, Ahmed Gaïd Salah, has suffered a new setback. He lost the “Battle of Algiers”–the city that he had wanted to close to protesters as a first step toward imposing his electoral plan by force.

Algiers, the capital, was closed to the other Algerians but it was full of people. The demonstrators braved all the threats and foiled all the plots of the powers-that-be by keeping the unique character of this Hirak: Silmia, peaceful nonviolence… They took to the streets in all the arteries of Algiers without exception. They came from Bab El-Oued, El Harrach, and the heights of Algiers, to gather between Didouche Mourad, Hassiba Ben Bouali Street and the central post office …

This thirty-first Friday was specially dedicated to the chief of staff, who who was squarely targeted by the action. All the slogans converged against him.

You can relive the demonstration of the 31st Friday, in Algiers, in photos by our dear friend Yacine Aouli, who wants to share these moments of nationalism with his Algerian brothers and sisters.

And now, here’s a small sample of Aouli’s photos: