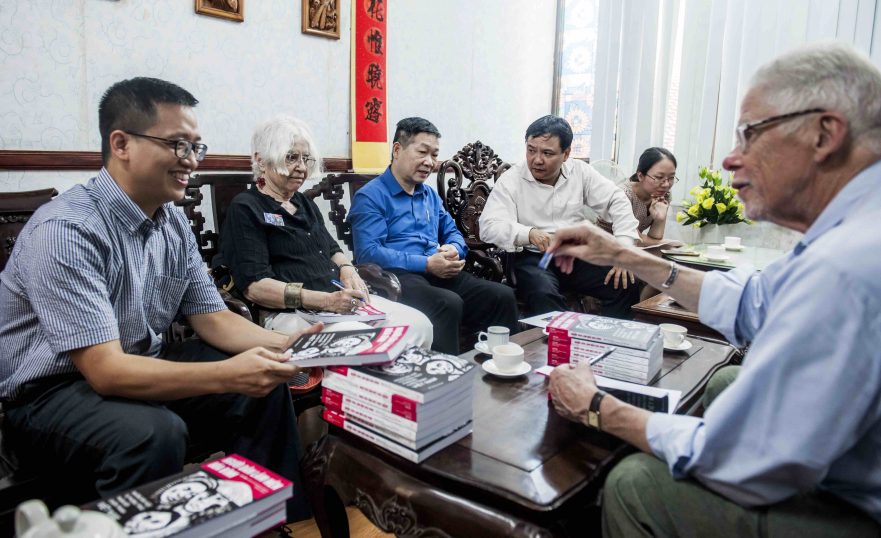 Last month, five longtime peace activists from the United States retraced steps to Vietnam that four of them first trod back during the US-Vietnam War. Led by “Ong” (grandfather) Frank Joyce, shown at right above, the group’s visit marked the launch of the Vietnamese-language edition of The People Make the Peace: Lessons from the Vietnam Antiwar Movement, a volume of memoirs of their activism that Joyce co-edited along with Karín Aguilar-San Juan.

Shortly after his return to Michigan, Joyce reported that:

The launch of the Vietnamese edition of THE PEOPLE MAKE THE PEACE—LESSONS FROM THE VIETNAM ANTIWAR MOVEMENT was a huge success.  The room was packed with students,  dignitaries and more.  They had to send out for more books.  Karin and I participated in a salon-style discussion about the book.  There was extensive media coverage.

Joyce was accompanied on the delegation by his co-editor, Karín Aguilar-San Juan, a professor at Macalester College in Minnesota; his wife Mary Anne Barnet; and book contributors Judy Gumbo Albert from Berkeley, California, and Alex Hing from New York.

On July 11, the five– along with their colleague Doug Hostetter, who was unable to make the trip– were awarded the “For peace and friendship among nations” medal by the Vietnam Union of Friendship Organisations (VUFO) in recognition of their contributions to peace and friendship between the two countries.

Addressing the ceremony, Ambassador Nguyen Tam Chien, Vice Chairman of VUFO and President of the Vietnam-US Society, said the activists had devoted their youth to protesting the war in Vietnam in the 1960s and 1970s: “They participated in and mobilized many others to join demonstrations and activities to show solidarity with Vietnam and demand the withdrawal of US troops from Vietnam. After the end of the war, they continue to work for the friendship and cooperation between the two countries.”

The ambassador stressed that the Vietnamese people always remember with gratitude the U.S. friends who stood side-by-side with Vietnam to struggle for the end of the war and the return of peace in Vietnam.

In response, Joyce said the group would continue to work for the development of bilateral relations between the U.S. and Vietnam.

The little delegation also had several meetings to gather information on some of the lasting physical/physiological legacies of the war, especially the longlasting effects of UXO (unexploded ordinance) and the U.S. military’s very widespread use of Agent Orange. These meetings included:

Joyce reported that at the Defense Ministry, the group viewed Power Point presentation that clearly and concisely explains the history and current situation regarding these outrageous legacies of the war. (You can download the whole of this 2.7 MB file in PDF form, here.)

After the delegation finished its work, Joyce reflected on why it was that its members had received such a warm welcome and strong recognition from the people they met with. He wrote this:

My view is that the movement that opposed the U.S. invasion of Viet Nam has an inferiority complex.  Many—actually most,  I think—of those who participated in the antiwar movement have drunk gallon after gallon of the Kool-Aid served up by Forrest Gump, Ken Burns,  the NYT,  the Pentagon and others that “the movement didn’t really mean much of anything. ”

The Vietnamese know better.  Which is why they continue to honor and uplift the antiwar movement. And why they published THE PEOPLE MAKE THE PEACE LESSONS FROM THE VIETNAM ANITWAR MOVEMENT in Vietnamese.  And why there is an extensive exhibit at the Hoa Lo Prison Museum (known to many as the Hanoi Hilton) about the antiwar movement that is drawing large crowds. And why they want US Americans,  especially those who opposed to the war to come to Viet Nam in 2020 to observe three significant anniversaries. (See below for more on that.)  And why,  in addition to daily news coverage of our delegation,  the TV network followed and interviewed all of us extensively for a documentary that will come later.

The Vietnamese genuinely appreciate the role the antiwar movement played in helping them defend their country and want young Vietnamese to know about it.

The events planned for 2020 that Joyce referred to have been described by one of their Vietnamese hosts in the following terms:

We at VUS/VUFO will organize some grant activities and would like to invite and host many friends/partners as organizations and individuals from the USA to Vietnam, to celebrate and discuss for the current and future activities/programs for enhancing the relations and cooperation between our two people and countries. We will also take the chance to express our thanks to your goodwill, efforts and contribution to Vietnam and the US-Vietnam relations and cooperation in various period of time by many American friends and partners.

We think to invite peace activists during the war, friendship groups, and veterans and their families in many groups and son and daughter generations. On the occasion, we want to confer different kinds of awards to… our friends/partners as individuals and groups.

Joyce notes that the Vietnamese planners of these events are very interested in having U.S. Americans attend and especially those who were in contact with the Vietnamese in Hanoi, Paris, Montreal or other locations during the war.

You can hear a very informative hour-long discussion that Joyce, Judy Gumbo Albert, and Jay Craven (who was also a contributor to the book, though he did not go on the latest trip) had last week with David Goodman of “Vermont Conversations”, here.