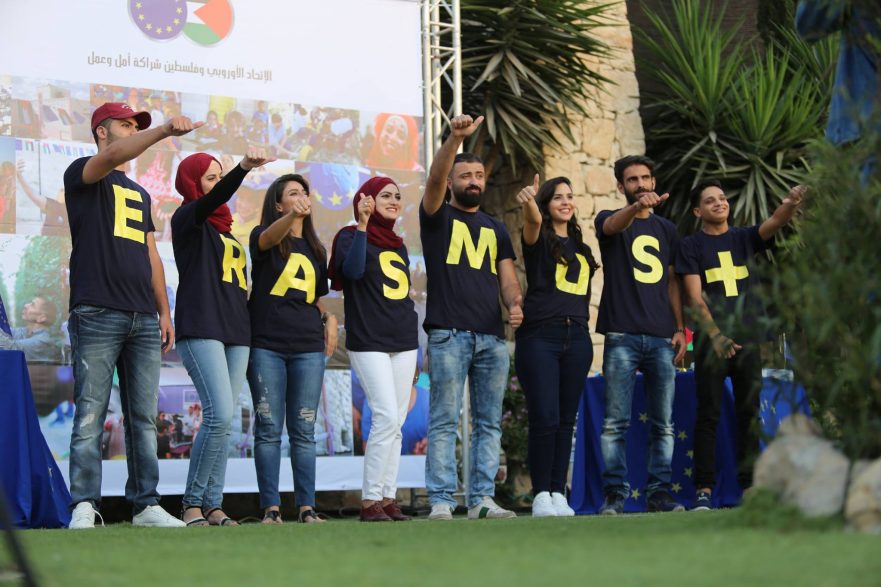 A couple of months ago two Gaza students, Mustapha Al-Buhaisi and Mustapha Aljamal– who happens to be my brother—both of whom are studying French and English (language and literature) at Al-Azhar University in Gaza, won a scholarship to attend a summer school in France. This scholarship is part of the Erasmus Exchange Program of the European Union. Yet, the Israeli authorities have until now denied them the permit that they need in order to leave Gaza, cross to the West Bank and then to Jordan, en route to France.

Their dream of traveling out of Gaza for the first time in their life now seems to be fading.

In a letter they sent to Gisha, an Israeli human rights organization which facilitates the movement of Palestinians in and out of the Palestinian Territories, Aljamal and Al-Buhaisi noted,

We…are writing to you, with a heavy heart, regarding not granting us a permit by the Israeli authorities to cross to the West Bank and Jordan to join our Erasmus summer school in Paris on June 24, 2019.

Both of us, after months of hard work and preparation, have won scholarships to attend a summer school as part of the Erasmus exchange program… the Israeli authorities didn’t approve our requests to leave the Gaza Strip. For logistic reasons, the Erasmus scholarship is willing to help us get out of the Gaza Strip through Israel then Jordan. The Rafah crossing {via Egypt} is not an option.

Time is now running out for the two young men to exit Gaza, since that requires an Israeli permit and a lengthy process. Their hope is fading away every day.

The story of the two Mustaphas is yet another example of how Palestinians students in the Gaza Strip are collectively punished merely for being residents of the coastal enclave. It is the story of thousands of Palestinians who have lost opportunities and scholarships throughout the years of Israel’s occupation and siege of the Strip, preventing them from leaving Gaza to seek academic growth and mix with people from other cultures.

Learning languages is challenging in Gaza. Students don’t have enough access to academic resources, native speakers, or the modern means used to learn languages everywhere else around the world. Yet, the people of Gaza always thrive. For example, there are thousands of people in the Gaza Strip who can speak English fluently. They use the language as a way to connect with a world that left them in limbo under the 13 years of the suffocating siege. They use language to express themselves in different ways, including arts and graffiti– as my brother Mustapha has been doing on the walls of our Gaza refugee camp. (In addition to English and French, he has been teaching himself Turkish!)

But why do Palestinians have to go through this in the first place? I went through this too in 2013, when I was denied an Israeli permit to attend a translation conference in Jordan. I almost lost a research grant in 2013 after making four failed attempts to cross the Rafah Crossing into Egypt. I was lucky enough to finally leave the Gaza Strip—but I had to change my tickets five times! I have to confess though that I was pretty naïve to have bought my tickets in advance.

What the two Mustaphas are going through today is part of a larger campaign to silence Palestinians and keep us isolated from the rest of the world. Palestinians have to be kept behind the walls so that when they scream or even die, no one hears of them. Palestinian students have to wait at checkpoints and their schools have to be bombed and their classmates have to be killed, because an Israeli sniper or a 19-year-old-soldier, who feels bored of doing his job, decides so. “Everyone has the right to education,” notes the Universal Declaration of Human Rights. Yet, this does not seem to include Palestinians, who have one of the highest literacy rates in the world, despite all these restrictions.

So what do Palestinians do? They cling to hope, our eternal disease! The hope that “things will get better,” the hope that tomorrow is going to be better than today, the hope that students will be allowed to get in and out of Palestine without restrictions and the hope that the two Mustaphas– and all the young people in Gaza who wish to do so– will be allowed to leave and return as they wish, without having to worry about permits and visas, for “all people are equal”… at least theoretically.