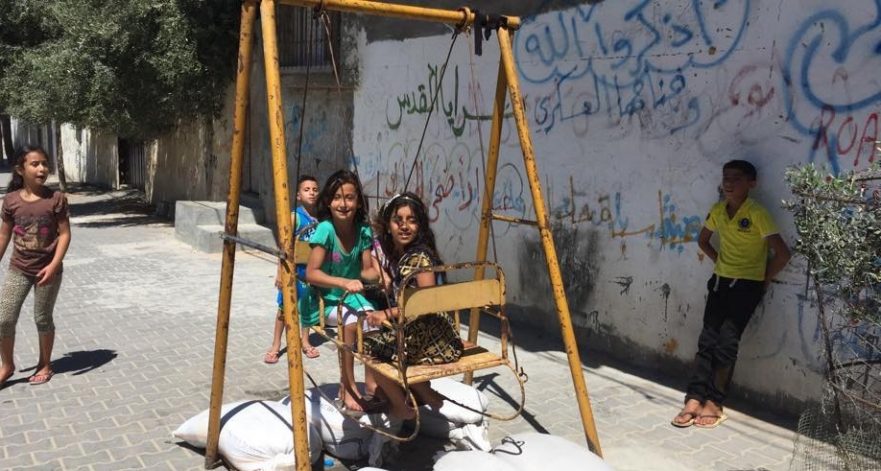 Every year, Muslims around the world and Palestinians under occupation and siege in Gaza (as elsewhere) celebrate Eid, the Muslim festival that comes soon after the end of the month-long Ramadan fast.

My memories of Eid in Gaza have always been of us children getting our “Eidiyya” gift-money from the elders of the family and buying toys, often gun-toys; of going out to eat at a restaurant and taking a photo together; of then squeezing all of us into my uncles’ two cars to go visit our extended family. For us, Eid meant eating big amounts of nuts and desserts as numerous mosque loudspeakers would announce the arrival of Eid, with worshipers echoing their calls in chorus as children fought to get closer to the microphones of mosques so their voices could be heard.

My Aunt Ghalia, an UNRWA teacher for 40 years, would ask boys and girls in our area to help her clean the main alleys in the neighborhood of our Gaza refugee camp to get ready for Eid, sometimes decorating the alleys with colorful items and balloons in celebration, and adding her own touch to the neighborhood. She would clean the dust and spill some water on the ground. This meant a lot to us as children and we waited impatiently every year for Eid to come to do this again and again over the years.

I remember that one Eid, my grandmother passed away on the first day. My eldest uncle asked us to keep our brand-new Eid clothes and he gave us money to buy things we liked. Eid was always a sacred thing to celebrate with family in a place like Gaza, even during Gaza’s many difficult times. It was so visible! Whenever we left the house, we could see children everywhere running in happiness while wearing their special Eid clothes, as toys decorated the fronts of all the shops.

But as Gaza’s suffocation continued, and the different offensives on the coastal enclave intensified and thousands of Palestinians were killed, Eid became an occasion to touch the old wounds of Palestinians. Soon after the Eid prayer, hundreds of Palestinians would flock to the Central Martyrs’ Graveyard in Al-Nuseirat refugee camp in the Central Gaza Strip, paying tribute to their loved ones and praying at their graves. A famous saying in Gaza went like this: Al-Eid Liman Mata Shaheed: “Eid is for those who were killed as martyrs.”

Ayman was on the roof of his family’s house. It was the first day of Eid.

As we celebrated the first Eid without Ayman, I wrote:

This is the first Eid without Ayman Shokor. This Eid, I will not pay Ayman a visit, nor will he brag about his mother’s cookies. This Eid, Ayman’s mum is in black, still in black. No more cheering, no more ‘good old days’, no more special childhood memories. This Eid isn’t like any other Eid. Since he has left us, since he has declared a final departure, the world doesn’t look the same, nor do we. These dark brown grains of sand covering his face and hiding his smile are doing no good. As people are busy distributing candies, I will spare time to hold tight to what is left of our shared memories, so that he is not just a face on a poster stuck on the walls of the refugee camp… so that he continues to be Ayman.

Today, as the suffocation of Gaza continues unchallenged, Eid becomes a stark reminder of economic hardships Palestinian go through. Many parents– it would be more accurate to say most of them– are no longer able to give their children Eid candies, buy them Eid clothes, or give them money to buy what they like. The majority of Palestinians in Gaza live below the poverty line and Eid seems to a far-away wish for many.

This year, hundreds more bereaved families of Palestinians killed during the Great March of Return will remember their loved ones with sorrow. Eid will be another tragic day for Palestinians in Gaza and kids will not be seen running in the streets full of joy, holding their candies and toys, nor will they wear Eid clothes. This year, the happiness of children, who have no responsibility for any of this, will be missing. Gaza will observe a sad Eid. Palestinians will ‘do their best’ to be happy, though their happiness has always been incomplete. Gaza’s loved ones, buried under its soil, will solemnly remind Palestinians that they need to hope that their next Eid will be better than this one. They want them to remain beautiful and happy as they have always been. Despite the occupation, despite the siege, despite the bullets and bombs that are thrown at them every time they try to rise.

They will remain beautiful and resilient as Palestinian novelist Ibrahim Nasrallah spoke of Palestinians: “Despite all these years under occupation, we are still beautiful, as if we live above the occupation, and not under it.”