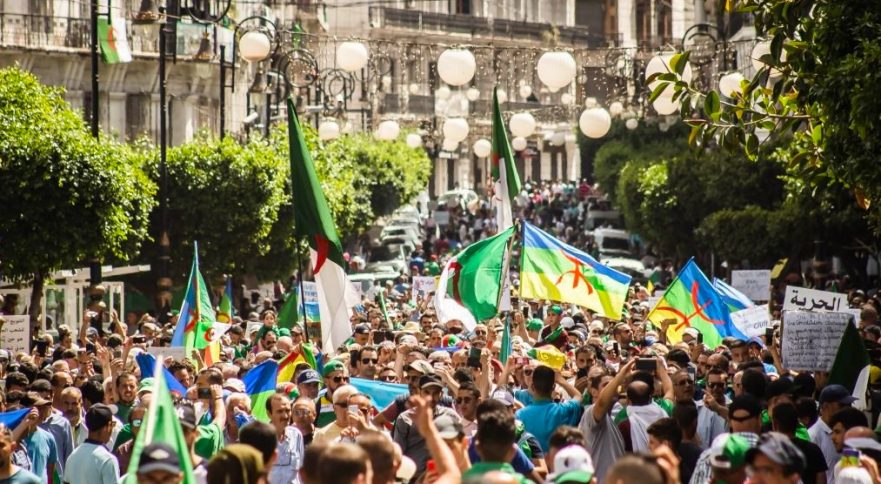 This past Friday (June 21) saw the 18th week of massive, peaceful protests filling the streets of cities all across Algeria.

Midweek, the country’s much-criticized strongman Gen. Gaid Salah, had issued an order decreeing that only the green-white-red national Algerian flag should be displayed in public. The June 21 demonstrators had a strong response to that: many carried both the national flag and the yellow-green-blue-red flag of the country’s robust Amazigh minority. (In an earlier version of this blog-post we had wrongly identified this group as “Berber. ~ Ed.)

See the sea of flags in one part of the capital, Algiers, above. Also, this woman had a distinct way of displaying both flags!

These images are from this page on the website “Algerie 360”, which has numerous other lively and informative photos of yesterday’s demonstrations.

One of the themes of the June 21 demonstrations was “A la une”– a strong assertion of support for the country’s national unity, and rejection of what many Algerians saw as Gaid Salah’s attempts to divide them along ethnic lines.

There were reports that some other demonstrators were defying the general’s orders by hoisting the Palestinian flag alongside the Algerian flag. Algerian sociologist Lahouari Addi was quoted as saying, “We fly it not because the Palestinians are Arab but because their cause is just.”

Indeed, many participants in the popular movement that has swept Algeria since late February have expressed great wariness about the role that some Arab states, especially Saudi Arabia and the United Arab Emirates, have played in helping to crush the parallel popular movement in Sudan in the past three weeks.

Many also remember the considerable support Saudi Arabia and other GCC countries gave to the extreme-radical Islamists who kept Algeria locked in a vicious civil war from most of the 1990s.

Algeria’s 42 million people are luckier than the 40 million people of Sudan, since Algeria has enough natural resources (hydrocarbons) that it is not dependent on financial backing from the oil-rich states of the Gulf.

Over the 18 weeks they have been demonstrating, they have maintained strong support for the “18 commandments of the pacifist and civilized demonstrator” published in early March.

They have made slow but steady political gains, starting with forcing/shaming their incapacitated longtime president, Abdelaziz Bouteflika, to abandon a plan to run for a fifth 5-year term in office. They also persuaded Gen. Gaid Salah not to proceed with a very hollow-looking presidential election he had earlier planned for July 4.

The country is in now in a deep political limbo. The very good news is that the military has done almost nothing to crack down on or suppress the demonstrations, though on Friday they did arrest eight people in the capital, for flying the Berber flag. In general, though, during the weekly Friday demonstrations the security forces content themselves with guarding the perimeters of certain centers of national power like the Presidential Palace.

Meantime, behind the scenes, there are reportedly a number of different projects underway to channel the huge popular power and hunger for reform that the demonstrations have revealed.

We have published a number of great background resources on this inspiring popular movement in Algeria. You can access them here. And if you want to learn more about the history of the iconic (and hard-fought) independence struggle that Algeria’s people waged against French colonialism, then this memoir, Inside the Battle of Algiers: Memoir of a Woman Freedom Fighter is an amazing resource.

We are now happy to present a few more photos from Algerie 360 (this page and this page.)