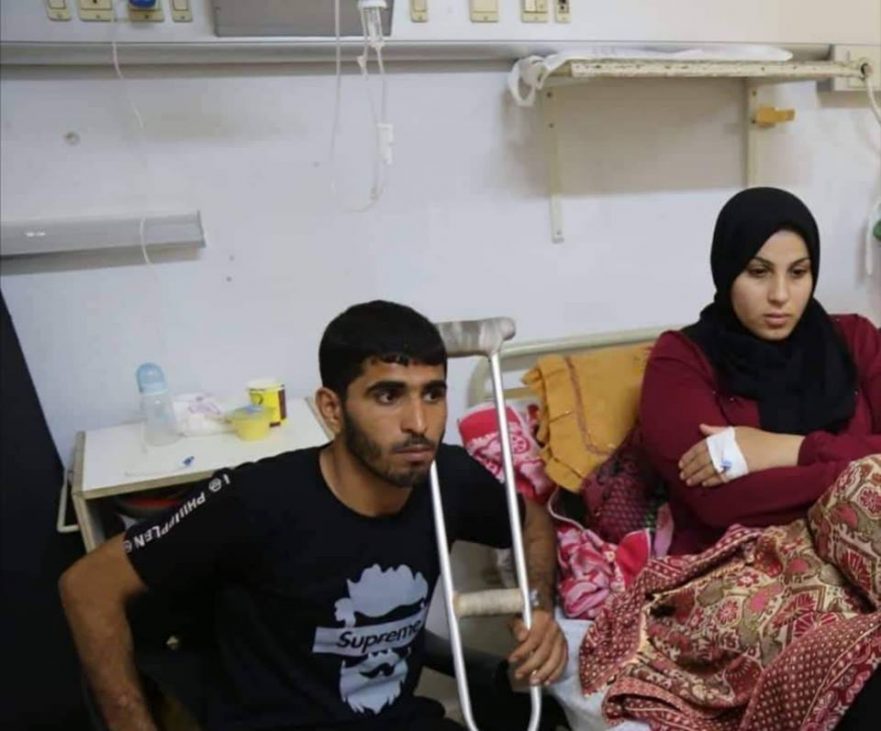 “Nothing hinders us. When we revolt against injustice, nobody can stand in our way.”

Gaza, Palestine – Since March 30, Palestinians have held weekly protests each Friday, now joined with maritime protests on Mondays, demanding their right to return to their occupied lands and an end to Israel’s twelve-year siege of the Gaza Strip.

During these protests, Israeli forces have injured more than 10,000 peaceful demonstrators with live and rubber bullets, as well as tear gas canisters, while killing 179.

According to the Palestinian ministry of health, many of the serious injuries are to the lower limbs, including the knees, and are the kind of wounds not seen since Israel’s 2014 bombardment and invasion of Gaza.

“The number of wounded has reached colossal proportions, the likes of which we have not witnessed since the occupation of Palestine in 1948,” said Dr. Ashraf al-Qedra, a spokesperson for the ministry of health.

One victim of Israeli fire is Aed Abu Amer, whose picture went viral before he was shot twice in both legs.

“After I was shot the first time and my picture went viral, I felt I was a target for the Israeli snipers,” he said.

“Whenever I came close to the fence they shot at me, until I was finally hit in my other leg.”

Despite suffering extreme bone and tissue damage, Aed said he would return to the fence to protest. 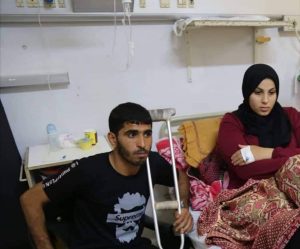 Asma Abu Daqqa, a mother of four shot while rescuing another injured women, was seen in a wheelchair participating in the massive demonstration.

“Despite the seriousness of my injury, I won’t stop protesting even if I have to crawl,” she said.

“I decided to join the March after my husband was shot and wounded. That Israeli bullet in my husband’s leg gave me the courage to join.”

Photojournalist Hanin Baroud, who was shot in the head with a tear gas canister a month ago while covering events near the fence, pointed to friends,who were asking her to be careful, and said, “The Israeli fire will never stop us from exposing the truth.”

“I went back to my work at the medical center, in the return encampment near the fence, immediately after finishing my treatment,” said Ahmad Arra’i, a medic shot with live ammunition by Israeli forces.

Palestinians have long been known for their steadfastness and determination to fulfill their call for return, freedom and justice, even at the costs of their lives. In particular, over nine months of the Great March of Return, Palestinians have been the image of sumoud, Arabic for “steadfastness.”

The mother of 21-year-old Palestinian medic Razan al-Najjar, who became a Palestinian icon after her death from Israeli gunfire, joined the March the Friday after her daughter’s assassination. Similarly, the mother of Mosa Hasanain, another slain medic, has never missed a single Friday protest.

Different methods as means of defiance

Palestinians have a long history of creating different forms of protest against their occupiers. In the Great Match of Return, they diversify their methods in ways that shed light on their dismal conditions under Israeli occupation and siege.

These have included the launching boats into the sea north of Gaza, spilling the March over into the night, as young demonstrators join protest activities near the fence.

Activism has spread beyond the encampments, with another demonstration area near the Israel-controlled Beit Hanoun crossing. There are also demonstrations every Monday near the maritime fence with Israel.

When I asked activists about the winter conditions near the fence, they said it was bad because of the muddy ground, but they remain steadfast.

“We will bring out tea, hot drinks and our long coats and return to the encampment area,” Abu Adnan Eid said.

“Nothing hinders us. When we revolt against injustice, nobody can stand in our way.”

“Maintaining this pressure is key,” Ahmed Abu Artema, one the organizers of the March, said.

“The popular struggle is difficult to contain, and the strength of the masses sends a powerful message to the occupation and its allies that in the face of a real crisis, radical solutions are required. The masses will not accept empty rhetoric.”

“Despite the occupation’s misleading propaganda, designed to avoid facing the origin of the problem, these rallies have demonstrated the effectiveness of popular resistance in applying pressure to the occupation and keeping it on the back foot,” he added.

“The people have protested for nine months. So far, this has not yet won Palestinians their basic rights, but they have forced the occupation and the world to cease their indifference towards the suffering of Palestinians in the besieged Gaza Strip.”

Hospitals are badly affected by the scale of injuries and deaths at the hands of the Israeli army in its response to peaceful protests.

In a statement to the ministry of health, they said the medicinal crisis in the health sector is the worst since Israel imposed its siege on Gaza. Beyond a lack of medicine, as well as fuel, cuts to the salaries of medical staff and restriction on movement to reach treatment outside Gaza have further complicated their work. 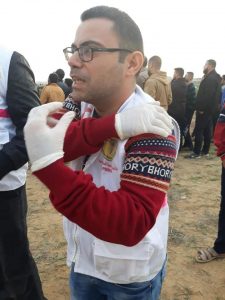 An unprecedented shortage of grants from a number of donors exacerbate conditions even more.

“The numbers of nurses and doctors are inadequate to handle the mounting number of casualties,” Dr. Medhat Abbas, director of Gaza’s al-Shifa hospital, said.

“We also have no ability to control overcrowding in emergencies. As the March continues, attrition is now on a daily basis and is no longer limited to only days of mass action.”

Wounded patients are placed in the corridors every day, especially in male surgical wards, due to of lack of beds.

The high number of injuries create miserable conditions at hospitals already impacted by a high demand for staff, equipment and beds that cannot be met, resulting in bad outcomes for many victims of Israeli aggression.

Yet Palestinians in the different encampment areas along the fence vow to continue the Great March of Return until the siege of Gaza is lifted.

Wafa Aludaini, a Gaza-based activist and journalist, is the manager of the 16th October Group.