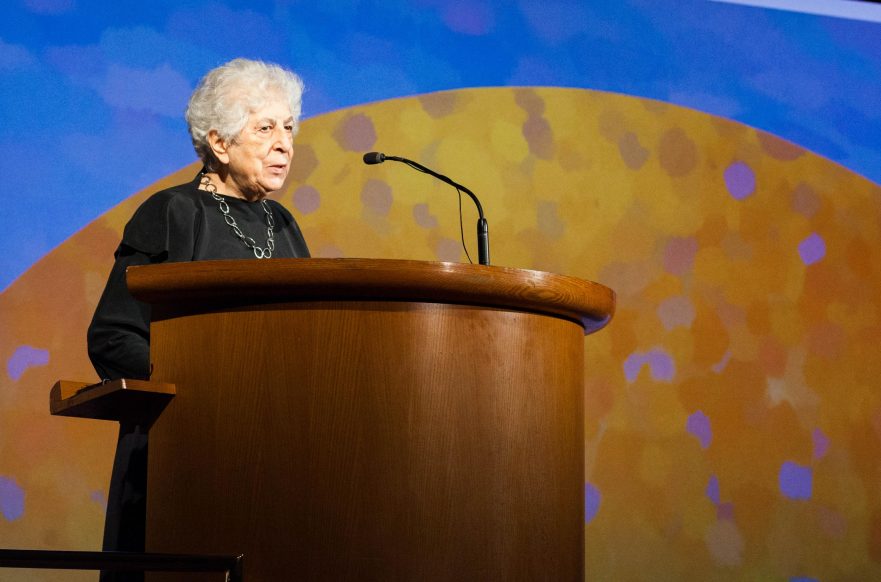 Even those of us who came to the Solomon R. Guggenheim Museum’s celebration of legendary Palestinian abstractionist Samia Halaby on Tuesday for the politics may have found ourselves blown away by the art. And despite Halaby’s distinction between them – “they are two separate disciplines” – at times the differences seemed minor, as the Palestinian and working-class struggle that has shaped much of her life found clear reflection in her decades of work.

14 years ago, on the 50th anniversary of the Kafr Qasem massacre, Halaby launched an exhibition to memorialize the 49 Palestinians under military occupation killed by Israeli border police while returning t their village on October 29, 1956. “It’s the essence of sumoud that Kafr Qasem resists, Palestine resists, Iraq resists, and Lebanon resists,” she wrote at the time. Last year, her work on the project became a book, Drawing the Kafr Qasem Massacre.

On Tuesday, Halaby opened her presentation with a clear declaration of the principles underlying this celebrated project. “I feel a tragedy every day when I hear of the oppressiveness that Palestinian children feel on a daily basis,” she said, displaying one of her many depictions of her native Jerusalem’s Dome of the Rock. “I would like to dedicate my work to benefit Palestinian children.”

But she went on to pose a different sort of challenge, defining the Dome – for her – as an object of aesthetic, not religious devotion, its glorious shades of gold and blue reflecting the Palestinian landscape as a whole. The latter position seemed striking in the context of Palestinian nationalism; the former, in the setting of an elite institution on Manhattan’s Upper East Side. 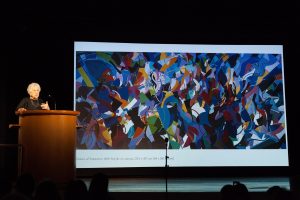 Photos by Ed Marshall Photography NYC and courtesy of the Guggenheim Museums and Foundation.

For those knowing nothing of her roots in Palestinian and Arab leftism, Halaby left little room for confusion about either her loyalties or their influence on her art. “I had the good fortune of visiting the liberated zone in Beirut during the class war of the 70s,” she said, adding later: “You can see me in relation to the Palestinian artists of the Intifada, and of the revolution in Beirut.”

And for those of us with no grounding in contemporary art, she offered accessible insights into the principles of abstractionism that have defined her decades of work in the field.

“There’s nothing I could do that would be as beautiful as this leaf,” Halaby said, describing the challenge of portraying the beauty of New Haven, Connecticut in the fall, which can be grasped without lifting a paintbrush. “It’s the product of an entire process of growth.”

Her solution, she said, lay in abstractionism. “If you want a painting as beautiful as what you’re looking at, you have to find a way to make the painting grow like an autumn leaf.”

Halaby’s love for her craft was clear. “When I tell you I love abstraction, it comes straight from the excitement I feel,” she said.

And this aesthetic position also seemed like an historical, if not a political one. “Abstraction is about the general principles,” she said. “For the first time in history, we’re using general principles, not showing single things at one time.”

Later, explaining her choice – controversial at the time – to depict the oppression of both Palestinians and native Hawaiʻians in a single work, Halaby explained: “I’m an abstract painter. I’m concerned with generalities.”