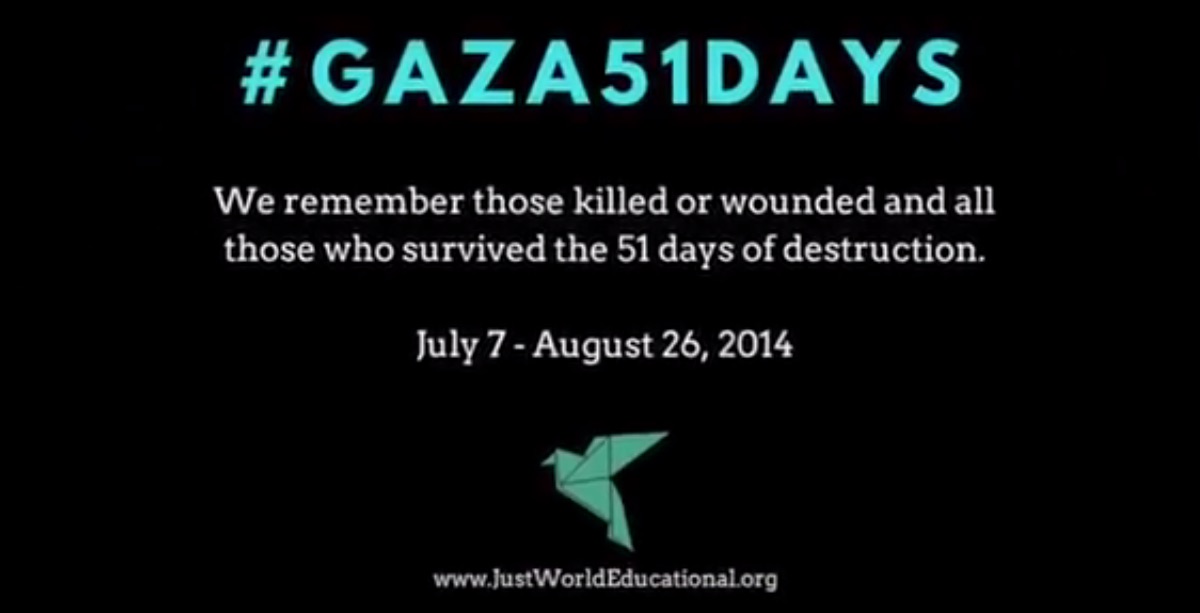 For 51 days this summer, Just World Educational ran a worldwide, web-based campaign to raise awareness of the plight of the 2 million Palestinian residents of Gaza and to start brainstorming actions people around the world can take to support them in their struggle to be able to exercise their rights in full. 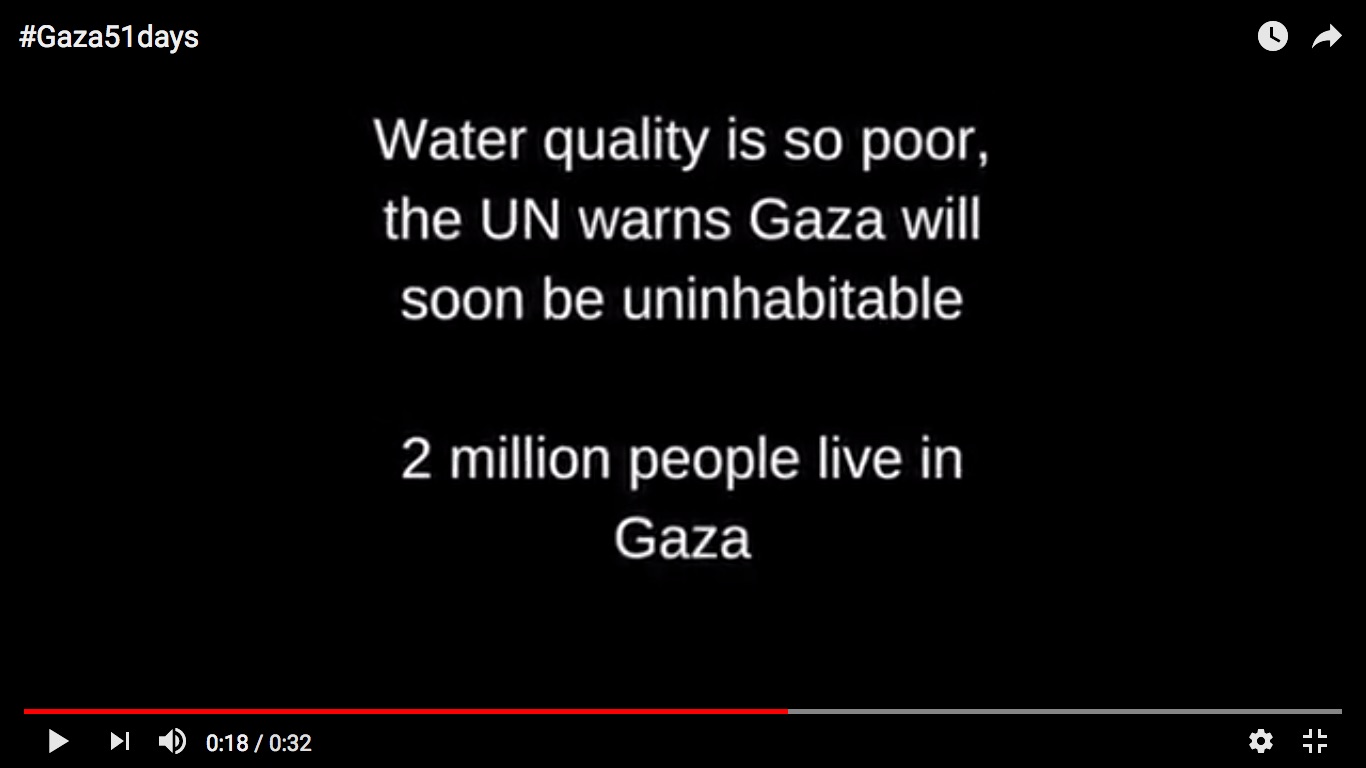 During our campaign, we actively engaged with more than 350 online activists around the world who joined our discussions and shared our materials via their own online platforms– mainly, Twitter and Facebook.

The most popular of the short campaign videos that JWE Director of Outreach Steve Fake produced for the campaign won 23,000 views on Facebook and 9,500 impressions on Twitter. (If you’re not on either of those platforms, you can view the video here.) 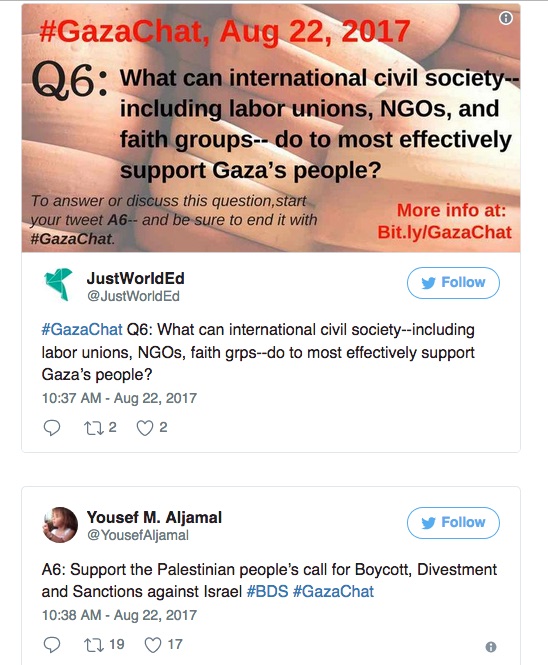 Toward the end of the campaign we held an extremely rich, globe-circling “tweetchat” whose participants held a thought-provoking online discussion of the actions that Gaza’s Palestinians want people worldwide to take to support the Gazans’ quest for rights and equality.

You can read a lightly edited record of that fast-paced “GazaChat” here. It featured both the Gaza-origined intellectual and social activist Yousef Aljamal (participating from Turkey) and the Seattle-based author and activist Alice Rothchild, who visited Gaza earlier this year. This record of the chat is well worth reading and re-reading.

The length and timing of our “Gaza51Days” campaign were chosen to mirror the timing of the punishing assault the Israeli military sustained against the Gaza Strip (with considerable help from allies including the United States), back in 2014.

Gaza’s people are still suffering very badly from the legacies of that assault– especially since Israel, which maintains iron control over the movement of all goods and people in and out of the Strip, has tightly limited the amount of construction materials it has allowed in. These materials are still sorely needed, to rebuild the tens of thousands of homes, businesses, and basic utilities that were destroyed or badly damaged during the 2014 assault.

In addition, this summer, the Israeli authorities and their puppets in the “Palestinian Authority” in the West Bank chose to inflict even more suffering on Gaza’s people by cutting the amount of electricity supplied to Gaza to just a couple of hours per day.

We built our “Gaza51Days” campaign as much as we could on the idea of networking with the Palestinian and other organizations operating in Gaza that have direct understanding of the needs and desires of Gaza’s population. Gaza’s population is made up overwhelmingly of civilians: families, many of them headed by females, in which parents, elders, and children have the same concerns and dreams as families anywhere else…

One constant feature of the campaign was that on each of the 51 days of the campaign on which there were fatalities in Gaza on that day in 2014– that is, nearly all of them– Steve Fake posted onto our @JustWorldEd Twitter account a somber listing of their names and ages.

This was a small gesture to remind people worldwide that behind each loss tallied in the “numbers” killed there was a person with a name, a biography, and dreams, capabilities, and fears just like anyone else. Though the gesture was small, these daily “obituary” tweets won a consistently high level of “Retweeting”, indicating that our followers around the world appreciated the gesture and shared our desire to memorialize those killed in 2014.

During the campaign, we also held two of our innovative, semi-structured “tweetchats”. The first of these, on August 8, covered matters of messaging around the issue of Gaza– you can read our first report on it here. The second, as noted above, was more focused on actions concerned citizens worldwide might take.

We also produced and released a couple of other short videos, which can all be viewed on the Just World Educational Facebook page. And we did as much as we could to share materials from a myriad of other sources that we thought could help to inform the discussion on Gaza and its future.

All these activities certainly helped strengthen both our online networks and our social-media-based educational capabilities. During the campaign JWE’s Twitter followership increased from about 30 to more than 1,200, and our Facebook followership from zero to 230… and our networks have continued to grow even after the campaign finished, a week ago.

Just World Educational plans to continue expanding these kinds of social-media work. They can be effective on their own in helping to fulfill our educational mission– and also, highly synergistic with the “in-real-life” activities that we will be continuing to undertake over the weeks and months ahead.