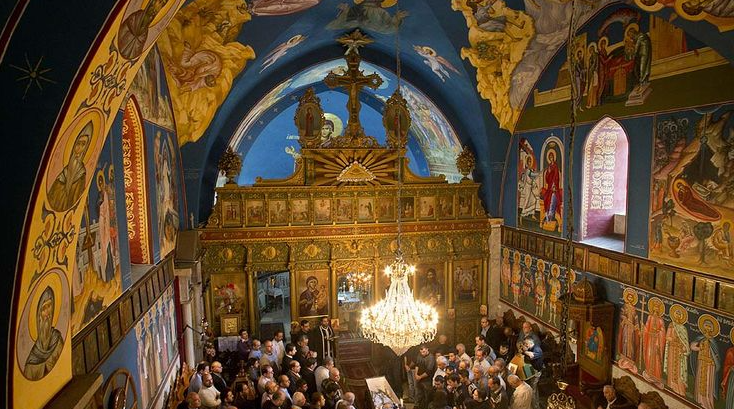 Just World Educational is pleased to publish the following article, which has been contributed to our “#Gaza51days” campaign by Jessica Hill, a Research Intern at the Washington DC-based organization Churches for Middle East Peace, and Kyle Cristofalo, CMEP’s Director of Advocacy and Government Relations. We feel too little is known about the Gaza region’s long history of Christian community life and Christian witness. (Indeed, the name of one of the region’s main cities, Deir el-Balah, is Arabic for “Monastery of the Date Palm”!)

By Jessica Hill and Kyle Cristofalo

Gaza is best known in the Bible by its mention in the Hebrew-Bible story of Samson: The Philistine rulers of the region, with whom he had been at war, captured, blinded, and enslaved Samson in Gaza after cutting off his strength-giving hair. But after his hair grew back, in a bold suicide mission Samson brought down the Philistines’ temple upon the heads, “killing many more when he died than when he lived.” (Judges 16:30).

Historically, Gaza had been a Canaanite city before it was Philistine. Later, it was conquered by Joshua as a part of his conquest of the Promised Land (Joshua 10:41). In the New Testament, it is known by the journey St. Philip made there after baptising the Ethiopian eunuch (Acts 8:26-40). Since the 5th century CE, Gaza has been home to the still-active Greek Orthodox Church of Saint Porphyrius, whose interior is shown in the photo above. (Recently, remnants of another Byzantine Church were found there.) Two millennia of Christianity in Gaza have bound the city’s small Christian community together.

Today, out of 2 million Gazans, only a fraction of the Christian population remains: roughly 1,200 people, with their numbers shrinking by an estimated five percent per year. Traumatizing local realities and years of socioeconomic decline, conflict, and blockades have contributed to the dwindling number of Christians in Gaza. Limited access to basic humanitarian needs such as potable water and electricity, unstable infrastructure and overwhelming unemployment rates, and the dire realities on the ground have forced Christians to leave their homes in Gaza for many decades now.

In a 2015 interview with USA Today, Luzil Asaree, a worshiper at the Saint Porphyrius church said, “We don’t want to leave, but we are forced to because of the economic and political situation here. It’s sad, Christians have been here since the beginning of our religion.”

Israeli policy prevents those between the ages of 16-35 from leaving Gaza. Christians in Gaza, like their Muslim neighbors, are denied basic religious freedoms as they are routinely prohibited from leaving Gaza to visit some of Christianity’s holiest sites, such as the Church of the Holy Sepulcher in Jerusalem, the Church of the Nativity in Bethlehem, or the many areas in and around Nazareth where Jesus did his earliest preaching.

Those who are granted permits to visit Bethlehem and Jerusalem during the holidays often use those opportunities to start a new life elsewhere. In an interview with Al-Monitor, Nashat Filmon, the director of the Palestinian Bible Society, noted, “Life is so difficult in Gaza that when people do get permission to exercise their natural right to pray and visit the holy places in Jerusalem, Nazareth and Bethlehem, they often use it to run away from the difficult reality.”

Easter 2016 marked a rare occurrence in Gaza, when Israel granted 847 travel permits to the Christian community. Karam Qubrosi was one of many to receive the permit: he planned to settle in the occupied West Bank, near Bethlehem.

For those who remain in Gaza, the holidays present an opportunity of relief from daily reality; “Christmas is always an important time of year for us, and to be with family and celebrate our religion. It gives us strength especially in hard times, but we can’t forget our situation in Gaza: Everyone here, Christian, Muslim, young, old, they suffer from it.” says Michael Tarazi, a worshipper at Saint Porphyrius Church.

The 2014 Israel-Gaza War hurt every community in Gaza very badly, and its effects are still felt today. Gaza’s Christians suffered a number of fatalities; but amidst the violence, the community and its institutions opened their doors to provide relief, offering shelter, food, medical treatment and education to thousands of Gazans regardless of their religious affiliation, during that devastating conflict.

According to an April 2016 U.N report, the 2014 war left more than 2,200 fatalities, 3,000 injured, and 75,000 Gazans displaced. The Al-Ahli hospital in Gaza City, run by the Episcopal Diocese of Jerusalem, played a major role in treating the wounded. The hospital reported receiving 4,300 patients during the war. It treated 45 patients a day for burns, of whom over half were children.

In late 2014, the Anglican Bishop of Jerusalem, Suheil al-Dawani praised the hospital in these terms:

In all the tragic events of the fifty day conflict, with its tremendous cost in human lives and suffering Al-Ahli hospital stood tall as a beacon of light letting the people of Gaza know it was and is there for them at all times and especially and unflinchingly in the worst times.

Jesus the servant came to serve and not to be served and that is exactly what you do and especially during this conflict. This is the work of God in Christ which he is doing through you and our partners to bring healing.

The Church of Saint Porphyrius also became a center of refuge for those fleeing the war. In an interview, Gaza’s Orthodox Archbishop Alexios told Reuters, “We have opened the church in order to help people. This is the duty of the church and we are doing all we can to help them. At the beginning there were 600 people and today they became a thousand– mostly children and women. Some of those children are a week old.”

The Church itself was caught in the crosshairs after an Israeli aircraft bombed a field nearby, causing shrapnel to damage the Church and some of the churchyard’s graves. One resident of a refugee camp in the middle of Gaza spoke to the ways Christians and Churches supported their Muslim neighbors; “They opened their churches for people who fled their houses because they were not safe. The 2014 war was during Ramadan so churches used to feed Muslims who were fasting.”

The Christian community today traces its rich history back 2,000 years and has been a crucial part of Gaza’s society and history. Its contributions through education, hospitals, churches and dedicated leadership have been a powerful expression of faith in a region which has suffered heartbreaking devastation from wars, ten years of Israeli blockade, and a discriminatory policy enforced through 50 years of Israeli occupation.

[Here are some additional resources from which you can learn more about the Christian community of Gaza: