Edo Konrad, writing in +972 magazine yesterday, remarked upon two things that I had also noticed throughout the past few days of the very visible, mainly Muslim, Palestinian protests in occupied East Jerusalem: (1) that these protests have been overwhelmingly, and in a very disciplined fashion, nonviolent; and (2) this strong aspect of the protests has been almost completely ignored by the Western mainstream media. 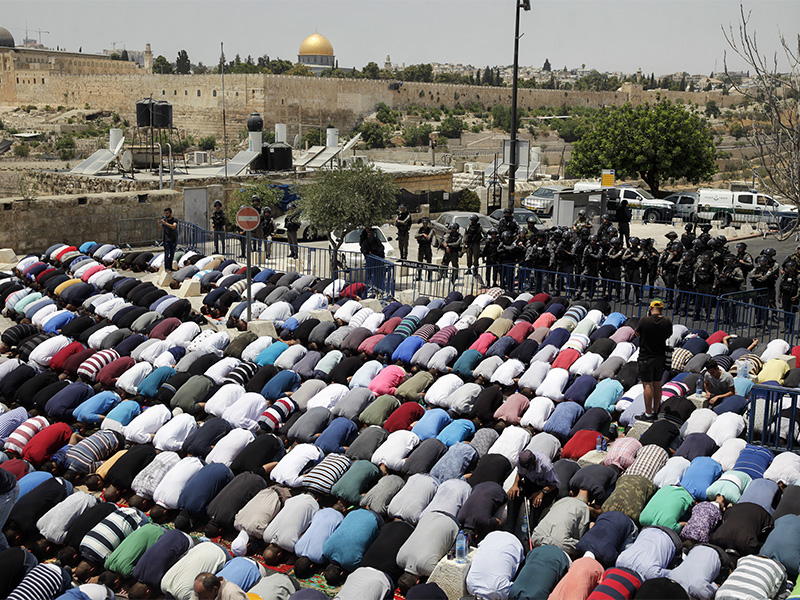 These are powerful observations. But Konrad doesn’t do much to explore why most Western media doesn’t remark on this aspect of the protests.

I believe that a big part of the reason is that most of these protests have taken the form of mass, public, Muslim prayer– something that perhaps most Westerners don’t easily recognize as a form of nonviolent mass action. Indeed, perhaps many Westerners find public displays of mass Muslim prayer like the ones in Jerusalem this past week either puzzling or even somehow threatening?

They shouldn’t. The history of the movements for equal rights and civil liberties in Western countries is full of examples of mass protests or demonstrations that embodied some form of religious practice. For example, the civil rights movement in the United States was often led by brave young people who linked arms and sang historic African-American spiritual music–often, as they explained to questioning outsiders, as a way of calming their own fears as they used their fragile bodies to confront the the snarling dogs, bullwhips, batons, and teargas of the helmeted and body-armored ranks of police who sought to control them.

Imagine how terrifying it is for Palestinians– in occupied East Jerusalem or elsewhere–to confront the far better-armed forces of the Israeli military and “Border Police”, who show little hesitation in using even life fire with metal bullets (sometimes, ones covered in rubber) to disperse demonstrations, no matter how peaceful the demonstrations are.

This photo, taken last Friday, shows some of those same peaceful, nonviolent worshippers being dispersed by tear-gas. But in some places, the Israeli forces also fired on peaceful demonstrators, resulting in the killing of three of them and the wounding of many dozens more.

Wouldn’t anyone taking part in such a public demonstration of feeling be right to feel scared? Wouldn’t standing shoulder to shoulder with your fellow demonstrators and taking part in a beloved religious ritual be one good way to calm such fears?

Of course, it wasn’t only Muslim Palestinians who were protesting last week. Rayana Khalaf yesterday published this excellent round-up of the actions various Christian Palestinian leaders, institutions, and individuals were taking to express solidarity with their Muslim compatriots. 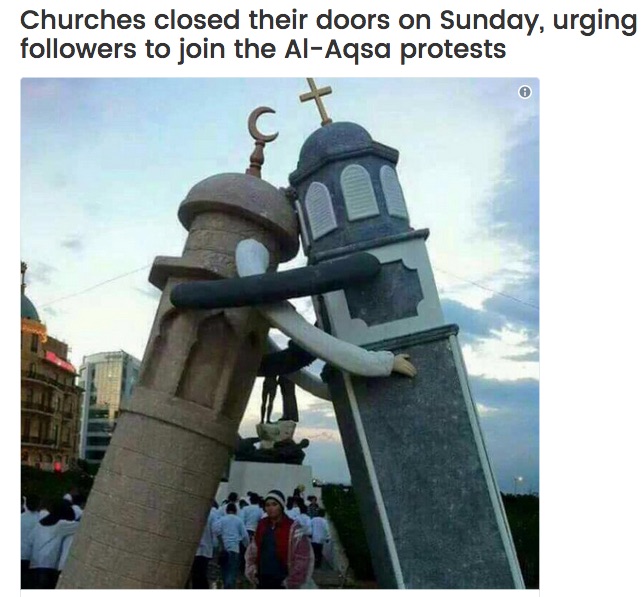 Her article contains several powerful graphics, including this photo (right) of two puppets on a street in Bethlehem– a historic city that is very close to Jerusalem but whose Palestinian residents are almost totally blocked from ever visiting anywhere, including holy places, in Jerusalem.

Khalaf’s article links to a moving video clip showing a Christian man, Nidal Aboud, who had sought permission from his Muslim neighbors to stand with them in their public prayer as he prayed his prayers from his prayer book. It also gives several examples of Palestinian Muslim and Christian community leaders working together to protest and work to reverse the tight limits Israel has put on the access of both communities to their many beloved holy places in and around Jerusalem.

Other useful resources on the situation of Palestinians in Israeli-occupied East Jerusalem include Miko Peled’s vividly written description of how these Palestinians experience the assaults that Israeli forces frequently make on their mass public prayer activities… and this much drier description from the Crisis Group of the  complex set of agreements that  since 1967 have governed access to the holy places– especially the area the Crisis Group calls “the Holy Esplanade”. (That seems to be a way of avoiding using either the name most Muslims give the area in question: “The Noble Sanctuary”, or the name most Jews give it: “The Temple Mount”.)

This “Holy Esplanade” is the whole beautiful, tree-studded and wall-enclosed campus that includes both Al-Aqsa Mosque and the intricately beautiful Dome of the Rock. It is also the area that sits atop the “Western Wall”/”Wailing Wall”/”Kotel”. 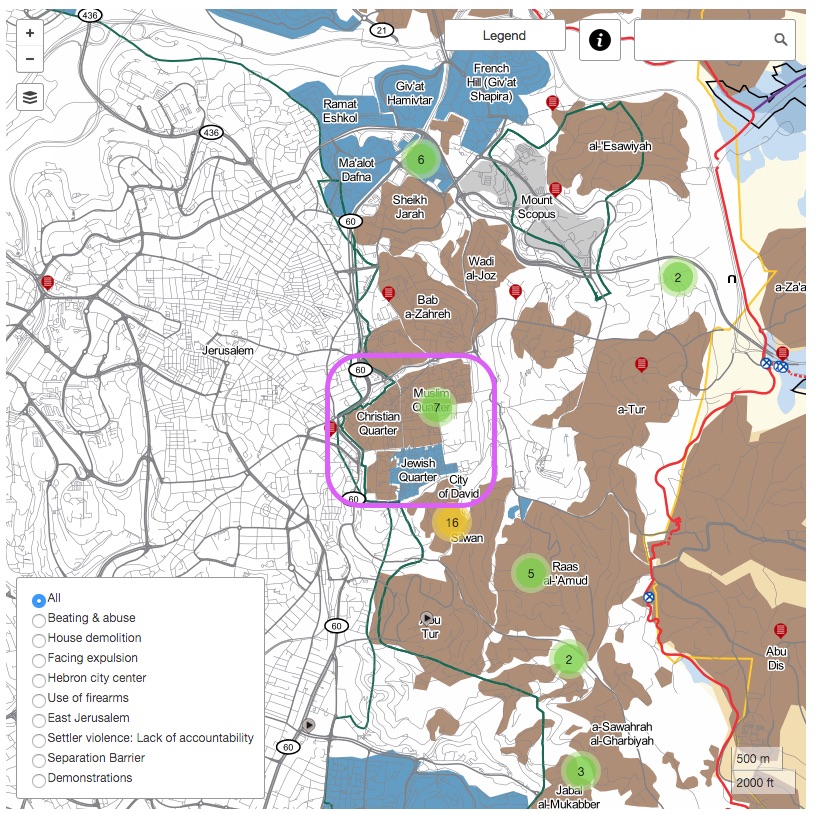 Map of part of Jerusalem, from Btselem. The “Old City” is in the purple box. The mainly white area on the left is West Jerusalem.

This esplanade takes up approximately one-fifth of the area of the (also walled) Old City of Jerusalem– all of which was part of the “West Bank” area that the Israeli military seized and started to occupy in June 1967.

Soon after Israel seized the West Bank, its government annexed (an enlarged version of) East Jerusalem. No significant government in the world has ever accepted that outright act of unilateral Anschluss.

Governments and inter-governmental bodies still consider all of East Jerusalem, including the historic Old City, to be “occupied territory”. As such, Israel can maintain a security presence in the area only in order to sustain its hold on the area until the conclusion of a final peace with the area’s legitimate Palestinian claimants. And pending the conclusion of that peace, Israel is forbidden under the Geneva Conventions from implanting any of its citizens as settlers in the area, from imposing any form of collective punishment on the indigenous population of the area, and from curtailing the civil rights (including religious rights) of these legitimate residents in any way except when curtailment is necessitated by immediate military necessity.

The Crisis Group– and several other commentators these days– makes no mention of the need to end the Israeli occupation of East Jerusalem and the rest of the West Bank as speedily as possible at this point!

But so long as the “international community” (primarily the United States, but also Europe) allows the occupation to continue, and gives Israel such broad leeway to commit gross violations of the Geneva Conventions with impunity, then the Israeli violations– many of which are themselves extremely violent, and all of which are backed up by the threat of massive violence– will continue.

Meantime, the Palestinians of Jerusalem will continue to do what they can to stay in their own homes, to exercise their rights, and to express their feelings as forcefully as they can. And “Westerners” should not be surprised that some of the actions that Palestinians in their homeland (or in diaspora) take are infused with religious meaning and religious rituals– whether Muslim or Christian. 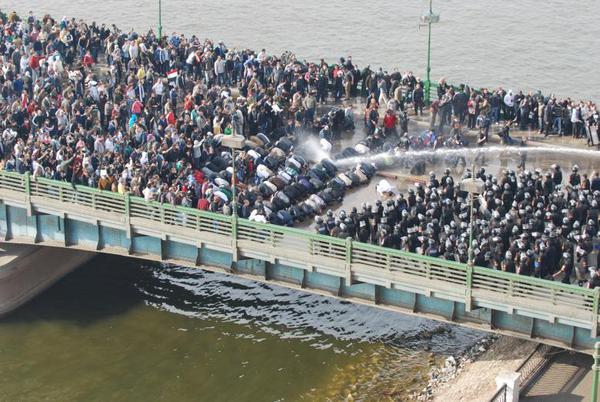 Other notable recent instances of mass, nonviolent civilian action with a specifically Muslim flavor were seen in Egypt during the “Arab Spring” uprising of late January and early February, 2011. (The photo at right shows one awe-inspiring episode then.)

Other, similar uses of massed, nonviolent Muslim religious observance have been seen in recent years in many other parts of Palestine, in Iraq, and elsewhere.

Will “Western” media and commentators recognize the very courageous and nonviolent nature of such actions? I sincerely hope so.