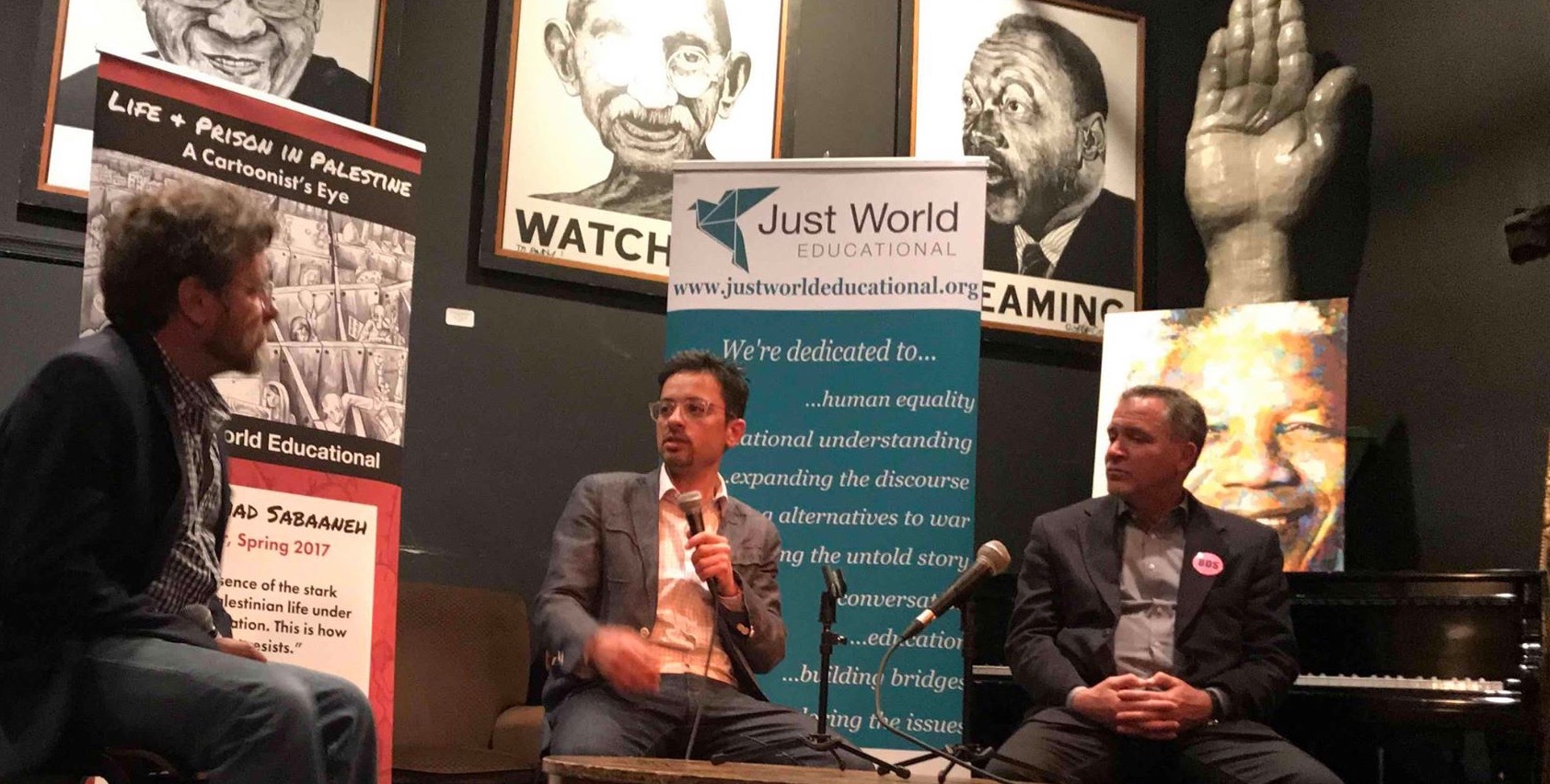 Ace Palestinian cartoonist Mohammad Sabaaneh has been taking his witness about art, life, and the terrible effects of Israel’s mass incarceration of Palestinians all around the United States. He has now completed just over half of his nationwide speaking tour, having spoken so far to twelve audiences in New York, New Jersey, Washington DC, Oregon, Washington state, and California. 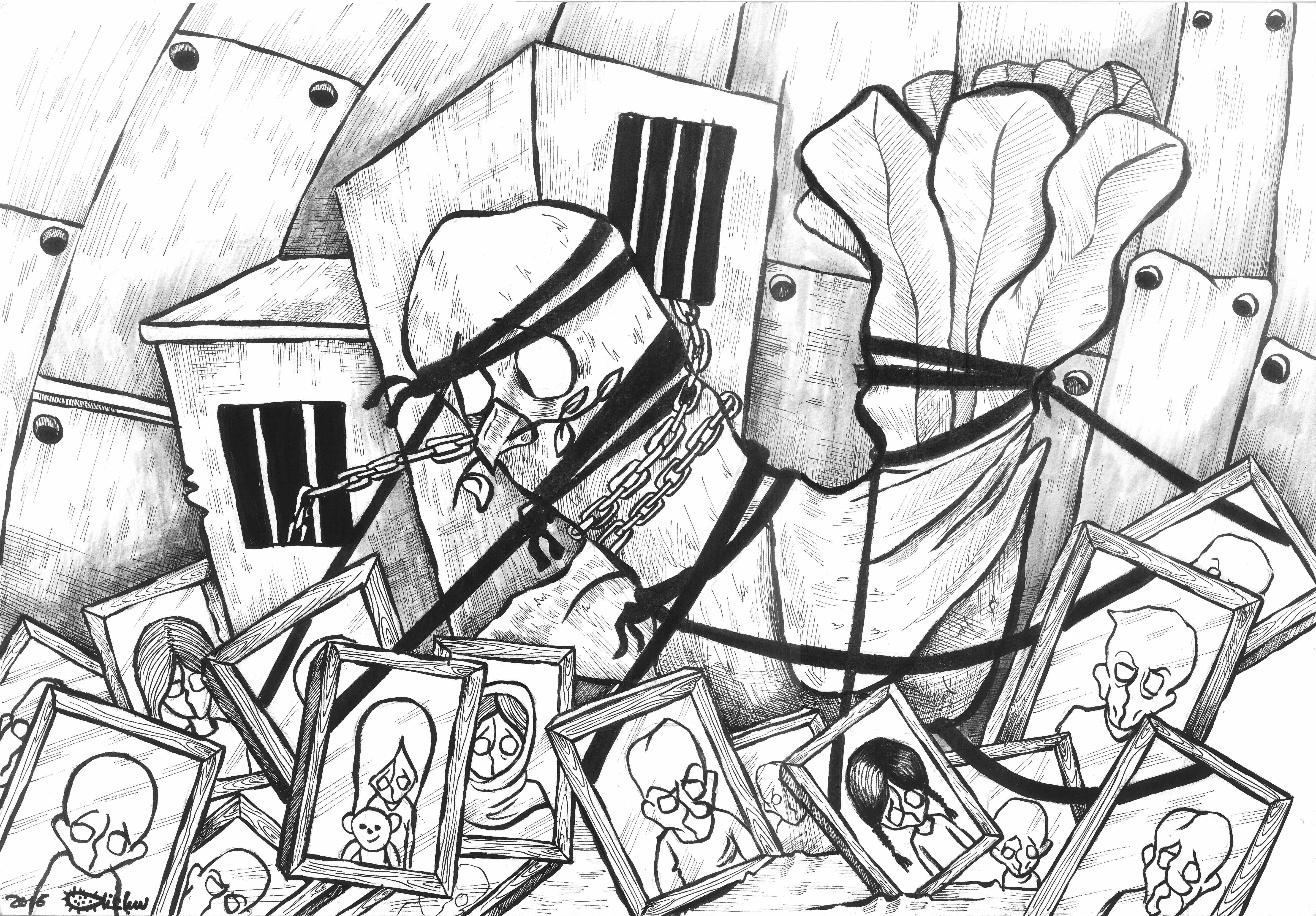 One image from Sabaaneh’s book

His tour is titled “Life & Prison in Palestine: A Cartoonist’s Eye”. It is very timely, because more than 1,500 of the thousands of Palestinian political prisoners being held in Israel’s jails are now in the fourth week of the “dignity” hunger strike, being waged in support of their demand for better prison conditions.

Mohammad Sabaaneh speaks powerfully to this issue. He’s a resident of Ramallah, in the Israeli-occupied West Bank area of Palestine, where he contributes a daily cartoon to the newspaper Al-Hayat al-Jadida. In 2015, after he took a business trip to Jordan, he was arrested by the Israelis as he crossed the bridge back into Palestine… and he was held in Israeli prisons for five months, without charge or trial.

That experience, including the two weeks he spent crammed into a solitary confinement cell, inspire him to write the book, White And Black: Political Cartoons from Palestine, that was released in the United States at the beginning of May.

The book contains a whole chapter of  poignant cartoons about the dire effects that Israel’s mass-incarceration policy has on the prisoners themselves– and their families. 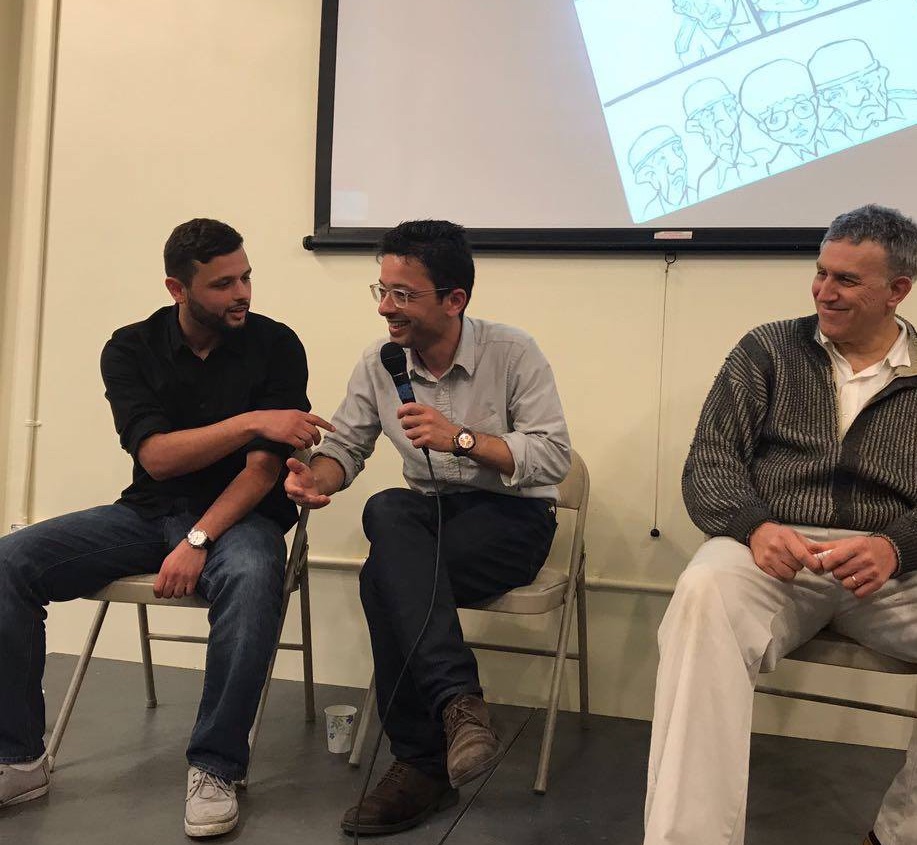 In San Francisco on May 9, Sabaaneh was featured in a large community event held at the “518 Valencia” event space. It was organized by Just World Educational and co-sponsored by the Middle East Children’s Alliance and the Arab Resource & Organizing Center. Some 100 people came to the event, where Sabaaneh was joined on the stage by renowned local cartoonist and broadcaster Khalil Bendib– and by Aarab Marwan Barghouthi, the son of imprisoned Palestinian leader Marwan Barghouthi, who is the leader of the current hunger strike.

Other venues where Sabaaneh has spoken on the tour include:

** Orca Books in Olympia, WA, where his event was co-sponsored by JWE and the Rachel Corrie Foundation;

** the Unitarian Church in Portland, OR, where the event was organized by Americans United for Palestinian Human Rights and co-sponsored by a coalition of other local organizations;

** the American Indian Community House in NYC, where he spoke on a panel that was part of the PEN World Voices Festival; and

** Busboys&Poets in Washington DC, where he was joined for a post-slideshow discussion by Matt Wuerker of Politco and Israeli-American peace activist and author Miko Peled. 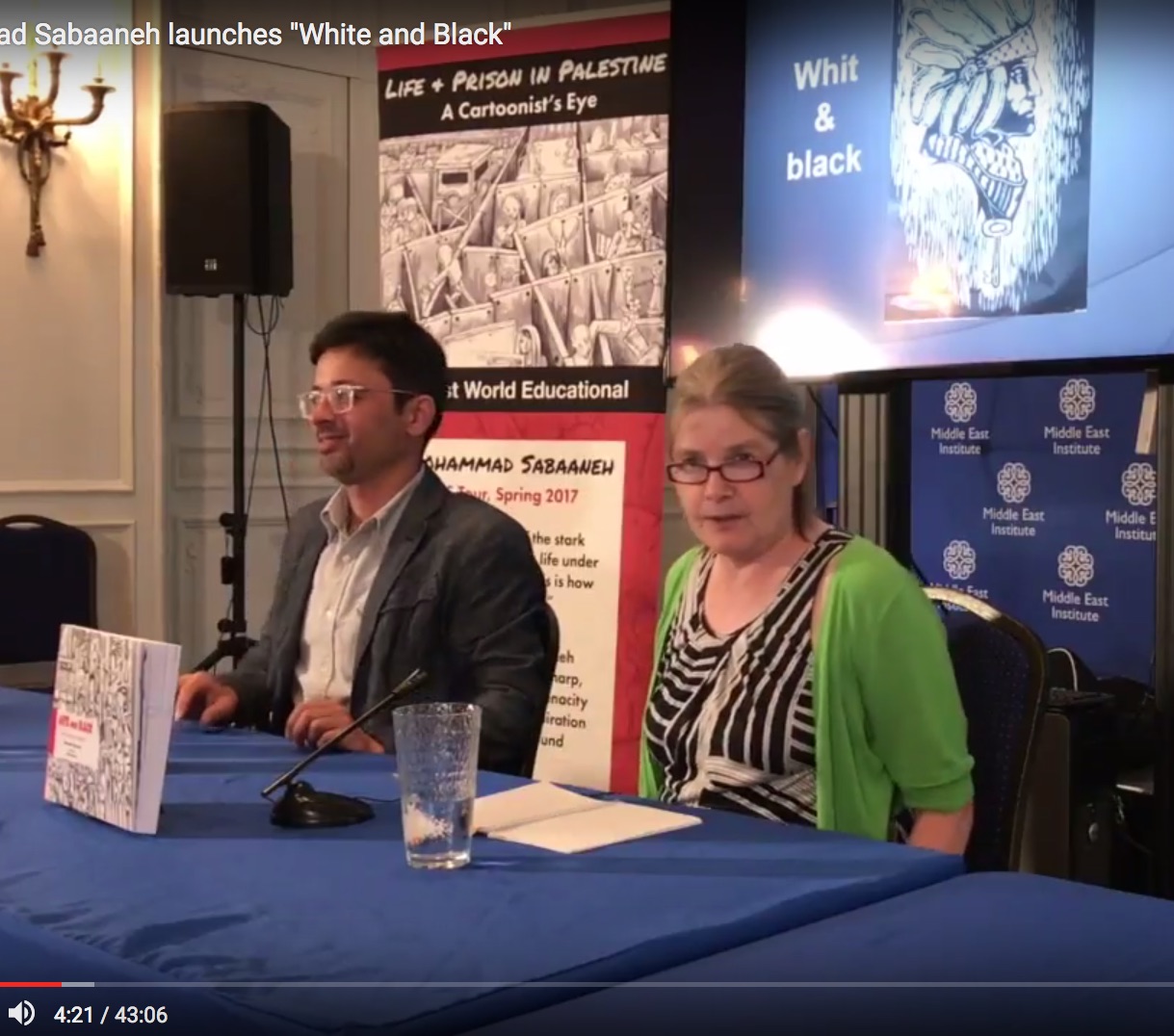 In Washington DC, JWE President Helena Cobban also introduced a great event at which Sabaaneh launched his book. You can see the videotape of that event, here.

In Portland, his hosts arranged a semi-private meeting for him with members of the local cartooning community. That’s how he got to meet and hang out with people like Joe Sacco and Craig Thompson!

Reactions from attendees at Sabaaneh’s events have been extremely positive. Attendees report having learned a lot from his talks about the conditions of life in occupied Palestine and about the situation of the Palestinian prisoners. Nearly all of them were also bowled over by the high technical prowess and creativity of his art, which until now has been little known in the United States– except among his colleagues in the political cartooning community, who have held his work in high regard for some years now.

Check out the endorsements on the back of his book! They include strong words of admiration and support from leading political cartoonists like “KAL” of The Economist, and Politico‘s Pulitzer Prize-winning Matt Wuerker. You can read all the endorsements the book has won from these people, from Joe Sacco, and others, here. 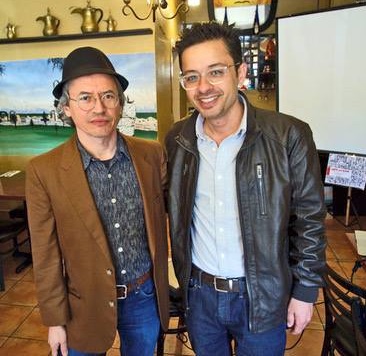 Sabaaneh is the Middle East Ambassador for an inspiring group called the Cartoonists Rights Network International, whose other leaders are all strongly admiring of both his art and his courage. While he was in Washington DC earlier this month, he was able to take part in a board meeting that CRNI specially organized to coincide with  his visit.

His tour has garnered some great media coverage. His best media “score” so far has been this 5-minute segment on the widely respected BBC/PRI radio show “The World”. He has also been featured on a late-April episode of the CUNY-tv show “Independent Sources”, on various Pacifica radio stations, and in Electronic Intifada (which ran this great feature story about him by Marguerite Debaie) and Mondoweiss (e.g. here.)

For the next couple of days, Sabaaneh will be appearing in California. Then next Saturday-Monday he’ll be in Chicago; next Tuesday, in Detroit, and next Wednesday back in NYC. He will wrap up the tour with appearances in Baltimore and Philadelphia, May 21 and May 22.

If you live in any of these upcoming cities, or have friends who do, be sure to check out the details of these appearances on the tour calendar.